Where to Eat in Spata: The Best Restaurants and Bars

Spata (Greek: Σπάτα), is a town 20 kilometres (12 mi) east of Athens, Greece. Since the 2011 local government reform it is part of the municipality Spata-Artemida, of which it is the seat and a municipal unit. The municipal unit (officially named Spata-Loutsa) has an area of 55.042 km.
Things to do in Spata 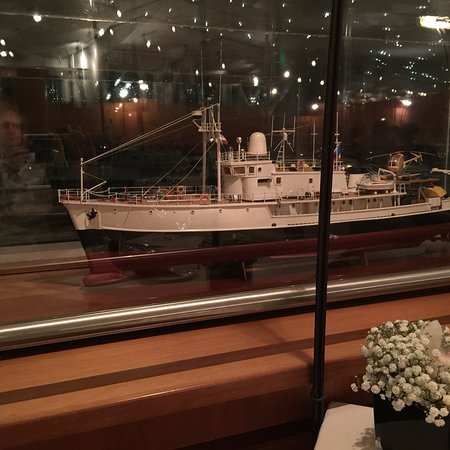 Elegant, gourmet dining restaurant with a magnificent panoramic view over the Athens International Airport and the valley of Mesoghia. A unique experience, which offers you the opportunity to observe our cooks create a marriage of Greek and French cuisine in our show kitchen. Set apart from the dining room, cozy bar Karavi, with its sophisticated décor, runway views and gentle lights, complements fine wines, cocktails, and international spirits.

In between 2 flights and a night at the Sofitel, we decided to try the rooftop restaurant instead of going by taxi to a restaurant somewhere else. The atmosphere was pleasant, with soft music in background, the food nicely presented. The waitress professional, kind, smiling, but service was slow. The cost was compensated by the advantage of not loosing time coming and going to a restaurant in Athens or Pireus. I was expecting a slightly wider menu.
Not really much of a view. The outside just a Terrace for smokers. 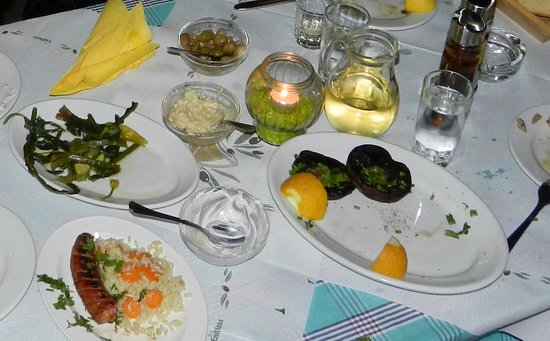 Three of us visited here on a business trip. The owner, Sampson (who speaks excellent English), looked after us himself, it was a quiet evening (midweek in December). We had a selection of mezze (selected by Sampson) ranging from beetroot salad through to sausages and chops. All were delicious.
It is a bit off the beaten track but if you have a car it is easy enough to find and there is plenty of parking along the residential streets.
For three people including drinks it cost around €70. 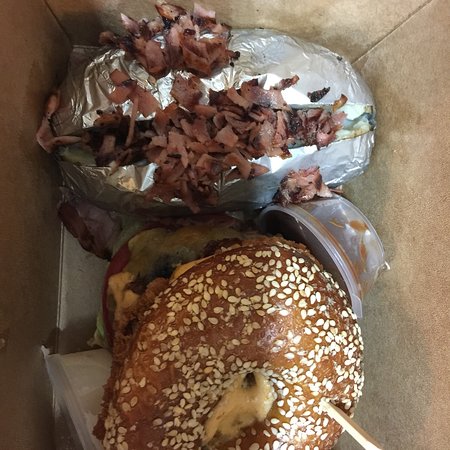 Excellent quality is sustained and inproved ! Once again we visited Juicy Grill once again everything was superb. Burgers, size/volume, salads at reasonable prices. It's is the place of choice for our youngsters, who are now visiting the place by their own! 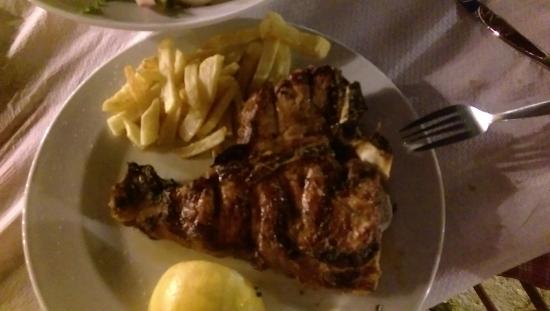 You'd like your last meal on vacation to be a good one. We weren't expecting fine dining just good solid regional cooking.
The fava was really good and we were glad to have that one last time as not all restaurants serve it and we can't get it at home.
The lamb chops were mostly fat with only one good bite per chop.
The chicken souvlaki had an odd flavor (not sure if it had gone off or just the spices they used), or maybe it just wasn't too our liking.
We had asked if they could make the fries crispy (we'd been told earlier in the trip that you have to ask for them crispy as otherwise they make them soft). The fries were limp, not very warm - we did not eat many.
We had also asked for the souvlaki without the pita (my wife just wasn't interested in it and didn't want to waste it). they argued with her so we got pita and didn't eat it.
The desserts were excellent. we had a tasty flan covered in delicous honey and Halvassi which reminded us of sweet firm cream of wheat.
The service seemed to be either them pretending they understood english (which is no problem if they don't but when they pretend to your expectations are set that you might get things the way you like them), or them arguing with us about the pita or them totally non-existant. The fries were cool and limp, the souvlaki possibly off, the lamb mostly fat and this is the first they will hear of it because they never came back. and showed no interest that we enjoyed our meal. We even had to find someone to pay so we could leave.
Maybe they were having a bad night but not worth the risk in my opinion. 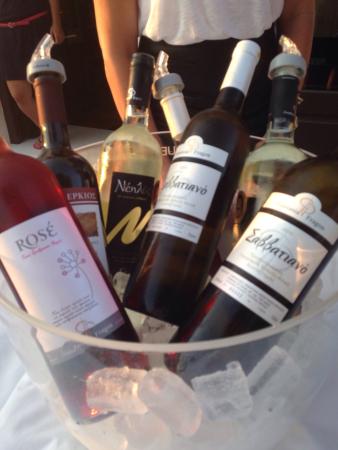 A great restaurant with the best service by the owner him self nd his caring to all of his guests . The best in Sparta . 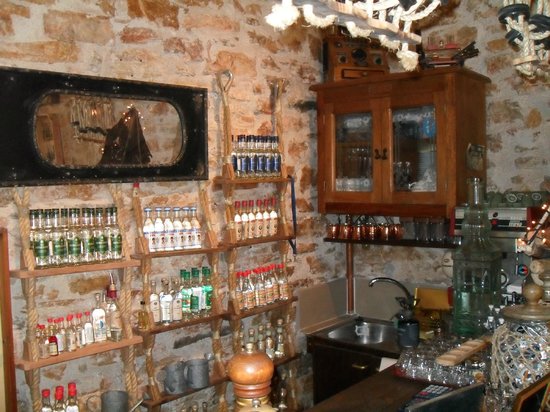 Reviewed By Angello Gabriel I 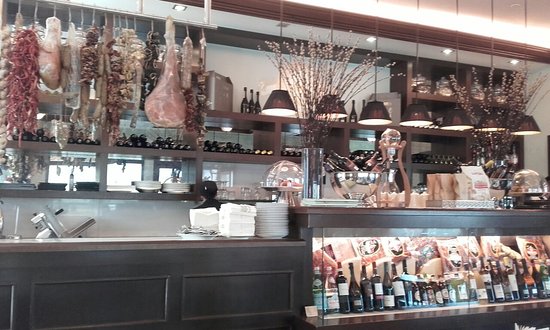 Have been there many times. Fantastic place for coffee, pastries, snacks, Italian food. There is indoor tables and outdoor tables. All indoor tables are marble luxuriously made accompanied with fine wooden chairs. The food includes pizza, spaghetti, risotto, salads, all very good cooked and performed! Expensive though but worth tasting. There is only one very serious drawback that I would like to mention. Kitchen service stops preparing meals by 21:30 !! This is really outrageously inappropriate for Greek clients. Its amazing how a restaurant that feeds hundreds of people every day can keep a good standard taking to consideration also the low cost. Its nice to see families with small children been given attention and the staff deserves a big "bravo" for their hard work...or maybe a little raise also? 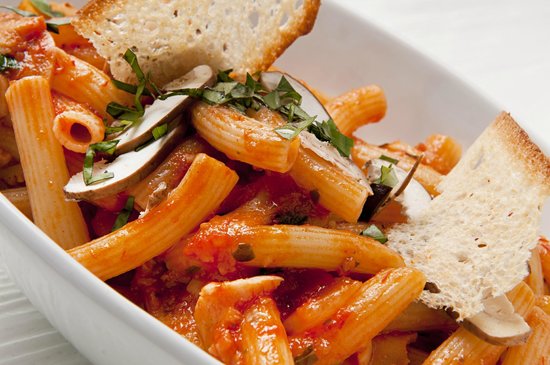 Live the experience of authentic italian cuisine in a modern and cozy environment! In Brunchy Risto we offer a taste of italian pizza or pasta, special meals, coffee or desserts. Our Mission is to produce the true flavours of traditional Italian cuisine. The rediscovery of simple flavours and fragrances, and the development of innovative food preparation methods represent the main objectives of Brunchy Risto Athens.

This was probably the best pizza I tried.I like it thick and juicy. The dish of the day was pork with carrot mousse and was also excellent...Dear Kosfire, thank you so much for your review. It is always a pleasure to make our customers happy. We hope to see you again soon! Best Regards, Brunchy Risto Smart Park team 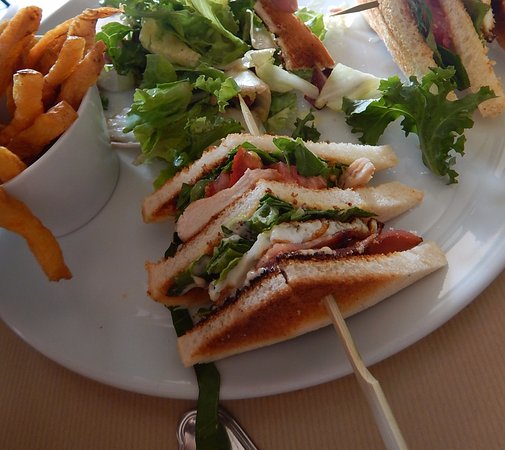 We have gone 4 times to π2 (π square) recently, the name being a pun on Πλατεία Πικερμίου (Pikermi Square), which consists of two words starting with the letter π. We have had coffee and brunch (the oven-cooked eggs with sausage and bacon, served with a little brioche roll were great) and also we have gone in the evening for drinks/dinner.
All the food was really good, with some very interesting options: Gorgonzola, walnut and rocket pizza, cornflake-crusted chicken mini burgers, and the π2 mini burgers with bacon, cheese avocado and a fried egg which is one of the best I’ve ever tried in Greece (it’s cooked medium, a rarity in Greece!) and I also had an excellent cocktail made with Cachaça, Madagascan vanilla ice cream and cinnamon.
The staff is friendly, the decor is very modern but relaxing and the music not too loud at night, making it a nice place to go for drinks when you don't want to be shouting to be heard. There are tables indoors and outdoors on the decking, and although it's very close to the main busy road it's covered with plants that block the traffic sounds and you might even get a visit from the friendly cute restaurant cat.
Overall a great little discovery in the up and coming area of Pikermi.