Top Restaurants in Province of Lleida

Top Attractions in Province of Lleida

Where to Eat in Province of Lleida: The Best Restaurants and Bars

The Province of Lleida (Catalan pronunciation: [ˈʎɛjðə], locally [ˈʎejðɛ]; Spanish: Lérida [ˈleɾiða]; Occitan: Lhèida) is one of the four provinces of Catalonia. It lies in north-eastern Spain, in the western part of the autonomous community of Catalonia, and is bordered by the provinces of Girona, Barcelona, Tarragona, Zaragoza and Huesca and the countries of France and Andorra. It is often popularly referred to as Ponent (i.e. the West). It is the only province within Spain that is landlocked.
Things to do in Province of Lleida 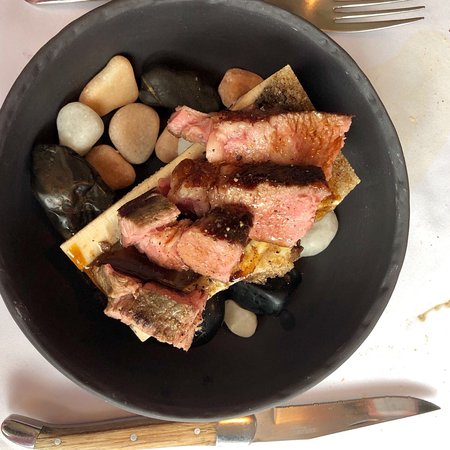 Welcome to the web page of the Occitan Restaurant. We are located on the Mayor Street of Bossost. In our modern and cozy dining room you will enjoy a dynamic menu which changes with each season along with our extensive wine selection. The restaurant is associated with Slow Food.

This is an excellent small restaurant in a lovely village. Be sure to visit the Norman church. I had excellent carpaccio of tuna belly filled with tuna tartar and a sprinkling of pistachio nuts. The stuffed rabbit was excellent as well. An exceptional cheese plate of five cheeses (with written descriptions) finished off the meal. Excellent reasonable wines are offered. The waitress was very knowledgeable and helpful with the wines. She was a real eonophile. 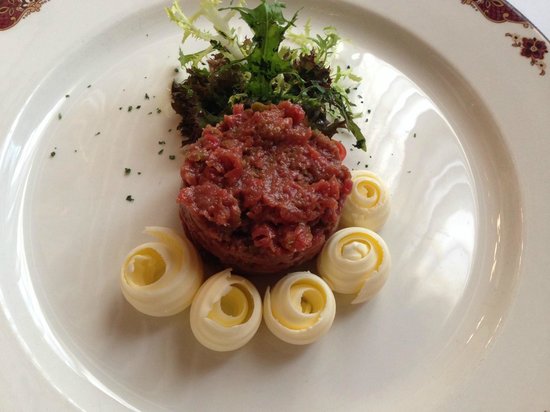 We passed by this place in the afternoon, knocked the door and made a reservation for the same evening.
Returned and were treated to a very good dinner, good wine and excellent service. I believe the staff is comprised of three gentlemen including the chef and they were around talking, smiling and very helpful even through our Spanish is limited.
We had a special lobster salad - is was superb. Portions are very large so one or for sure two appetizers are plenty for three people if you want to leave room for the main courses and maybe sharing a dessert. 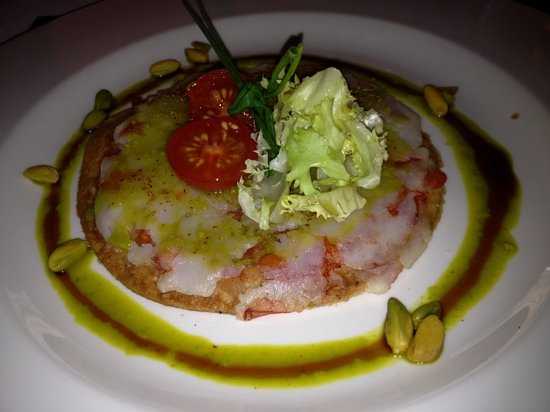 Restaurant is lovely inside, cool air conditioning, tables well spaced apart. Very warm welcome from the family's daughter, who speaks perfect English and answered our questions on the menu (which is translated into French & English too). We chose from the 35 euro 3 course menu, the tasting menu looked good, but at 9 courses plus amuse bouche, and not starting until 8.30pm it would have been a late night for us! As it was, we were given 3 amuse bouche before our starters, all great especially the foie mousse with PX reduction. Dad came out (who only speaks Spanish) and recommended an amazing bottle of white wine, seriously one of the best I've ever had, and only 18 euros! It was called 'Castell Del Remei Oda Blanc'. All the food was very good and generous portions too. Would have liked to choose from an a la carte menu, which they have recently stopped doing. Lovely service, attentive but not stuffy at all. This is the place to come after a long day of skiing, the mushroom fondue and the beer and onion fondue two very recommendable choices. The grilled veggies with meat sticks as a side dish go perfect with the melted cheese. 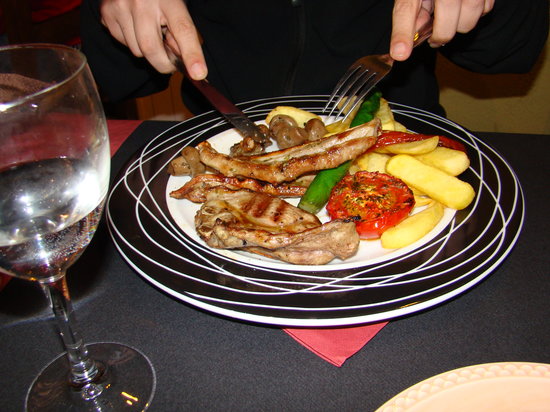 I liked the selection of local dishes on offer. We had the set-menu. I was pleasantly surprised by the french onion soup which is prepared with butter. The sausages were very flavorful. The portions were very large, the house wine very drinkable and price excellent.
The dining room's decorations made me feel like I was in a quaint ski hut.
The service was attentive and friendly. 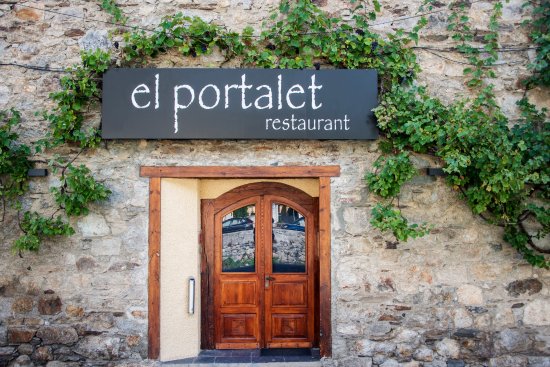 Our restaurant is located in an old "Borda Aranesa" restored, although it is within the population enjoys a superb location next to nature, with its own car park. The atmosphere is very friendly and spacious. The cuisine is creative style, our chef continues to innovate and to work, after more than fifteen years, the unmistakable style of Portalet. We have available all year.

Bossost is a pretty little town in the Val d'Aran just over the Spanish border from SW France. The Garonne runs through the centre of town and right beside the river is the Portalet. This place has the warm ambience of a family-run restaurant plus food which is worth at least two Michelin stars and immaculate service. The menu is easy to understand: it is in four sections (Starters, Fish, Meat and Dessert ) each having around 8 items. Choose a 4-course meal for 45 euros or skip either fish or meat for 30+ euros. Three courses are enough for any normal appetite. One reason for this is that there are no fewer than FIVE amuse-bouches offered free. Menus are innovative and food is beautifully presented and served - and cooked to perfection. The wine-list features some excellent Spanish wines beginning with a half-bottle of rose for 7 euros. With the help of our waitress, we chose a 2011 Catalunyan red for 19 euros, which was superb. The pace of service is perfectly judged to allow a leisurely meal. Our bill for four including wine and coffee came to 180 euros and was worth every penny.
I recommend El Portalet unreservedly. 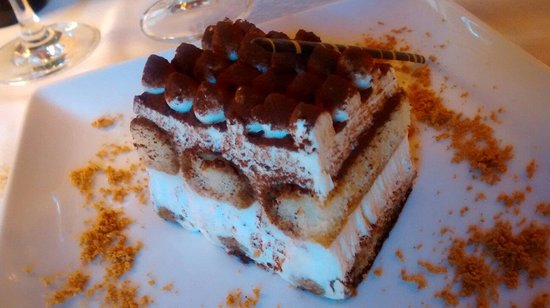 Els Puis is the best restaurant in all the pyrenees! The family who runs the place are very kind and carring, the food is excellent, there is a very large variety of alcoholic beverages, the desserts are fantastic and the price is very reasonable.
We plan on going there tomorrow! 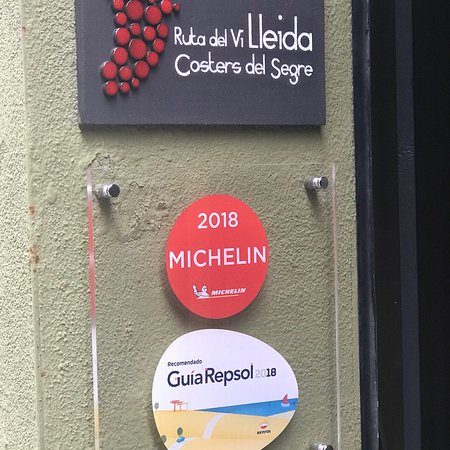 It is my second time here and everything is delicious!! First courses are just a pleasure for our senses. The meat is tender and it melts in your mouth. The desert is the best end possible of a meal. If you are a foodie, Ferreruela is a must. Wisely guided by TripAdvisor, we selected Can Xirricló (www.calxirriclo.com) for dinner on last Saturday evening, and were absolutely flabbergasted to find a first-class Michelin-star-level restaurant in downtown Balaguer, which by the way isn´t probably the nicest city in the surroundings of Lleida.
The exquisite Catalan-style cuisine, wisely orchestrated by Francesc, the third generation representative of family Molins in charge since 1954, ended with a sweet interpretation of a porcini mushroom (see picture). Finally, even the price was reasonable (below 100€ for two). 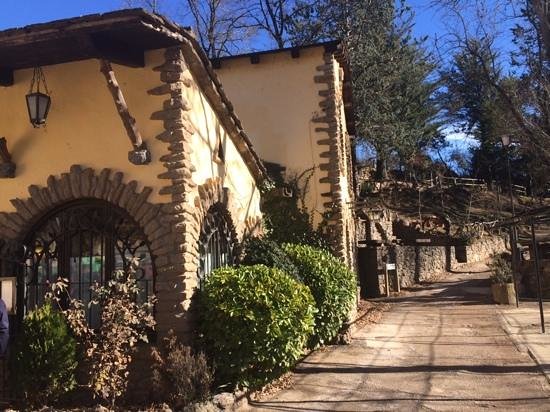 Arrived at opening time for lunch last Friday after visiting Solsona's weekly market. Restaurant filled within minutes! Waited patiently for English speaking waiter to share verbal only menu. Well worth the brief wait as we saw variety of dishes coming from kitchen. Only regret is not tasting more dishes! The crepe had the best flavors I've had in all of Catalunya over the past month of eating in restaurants daily! Pork ribs with sauce were very tasty. LOVED the fig ice cream! Appreciated the friendly service! Allow time to walk around the picturesque setting.