Where to Eat in Peyia: The Best Restaurants and Bars

Pegeia (also spelt Peyia; Greek: Πέγεια) is a town in the Paphos District of Cyprus. Pegeia is situated mainly on the steep slopes of the coastal hills inland from Coral Bay, at the southern end of the Akamas Peninsula, and it lies 14 km north of Paphos. It has a large population of British ex-pats and a growing number of holiday homes and apartments. In the town centre can be found a town hall, church, police station and several small shops, restaurants and banks. Due to its hillside location many parts of the town offer views over Coral Bay and Paphos.
Things to do in Peyia

Steak & Seafood restaurant!!! Best steaks in Town!!! You like to have a lovely dinner with nice service and atmosphere,come and visit us!!!

Right on the main road in Coral Bay. Classy establishment with fantastic service. Perfectly cooked fillet steak, very tasty mushroom sauce, fab starter, excellent dessert. My one criticism would be that the vegetables were a little too al dente for my taste. Nevertheless, highly recommended restaurant which we'd definitely return to. 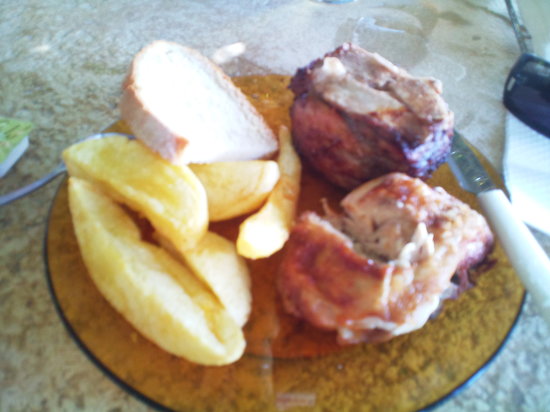 Sitting above the Avakas Gorge entrance a very welcome place to lunch 11:00 -17:00 closed Mondays. Like the Gorge difficult to find as up dirt tracks. No Menu only BBQed pork and chicken but mouth watering an absolute must. Greta service stunning views and cold beer 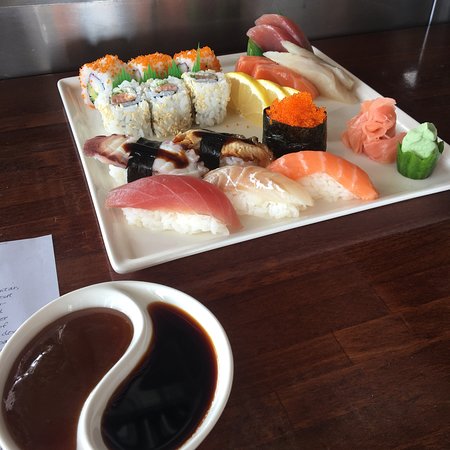 Valentines party at Samisen wouldn't of been my first thought but I'm so glad we came here. Service was excellent well looked after from entering the restaurant to leaving. Quality of food was also excellent all food is cooked on the grill in front of you with attention to a performance Hollywood would be proud of. Fresh meat and vegetables all lovingly cooked to your preference. The chefs are fun and accomplished in giving you a great dining experience. Highly recommended and the restaurant goes the extra mile if your celebrating a special occasion such as a birthday. Just let them know before hand and they will ensure your special someone will have a night to remember. Many thanks to all the chefs and service staff for a great evening. Definitely be returning to this fine establishment. One of the few that stay open off season but fully deserved a try if your visiting locally or if your residing in the area. 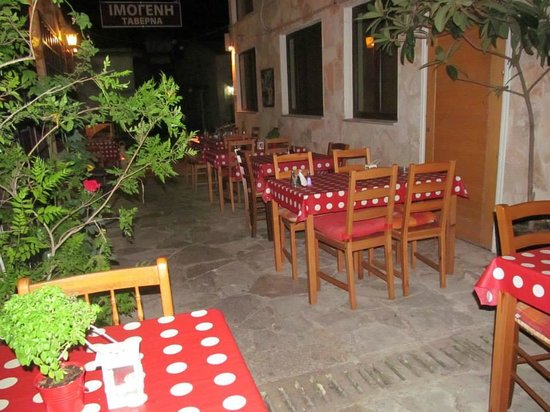 We are a family run taverna serving innovative dishes for the last 18 years. Our dishes are a mixture of Greek, Cypriot and Middle Eastern, all taking advantage from the fresh local products grown around us. Customers can sit in the court yard, shaded by the fig tree, during those hot summer days and romantic nights and come autumn, toast themselves from the burning log fire, while enjoying their meal Inside the taverna. Imogen&apos;s taverna has featured in Time Out, The Lonely Planet, Rough Guide, The Mail, Cyprus Weekly, OK Magazine, to mention but a few. It has also been awarded Winners of 2014 Certificate of Excellence. We are also proud to announce our new PIZZA BOX, serving home made pizzas of your choice to eat in or take away. There is something for all the family to enjoy at Imogen.&apos;S and we look forward to welcoming you to our taverna to experience excellent food with the Imogen&apos;s touch.

Last night the rain came first autumn meal indoors. As usual we were made extremely welcome and as regular clients our wine,ice and sparkling water was delivered within minutes. I have to admit that Imogens's is addictive and no matter how many times we eat at this delightful taverna all ways look forward to returning . Yes many family's will visit perhaps twice during there two week holiday in Cyprus which is a short time to give a real judgement but don't be put off by occasional hiccups after all you are not in Mc Donald's and fast slick service is not what Marina and Apostolos do. Have an evening experience drink some local wine have a chat about today's experience and above all enjoy the evening. 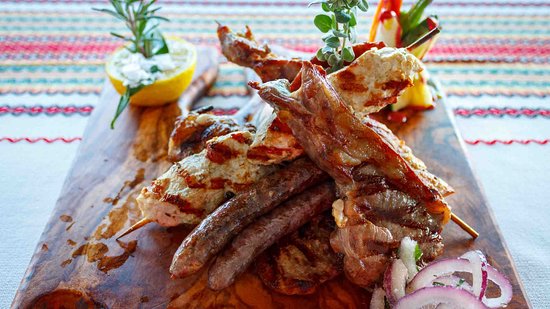 It was good to visit Savvas Grill after their winter break. Savvas greeted us with his usual friendly smile. Everyone enjoyed the delicious food and the log burner made the taverner feel real cozy and warm. We will return. 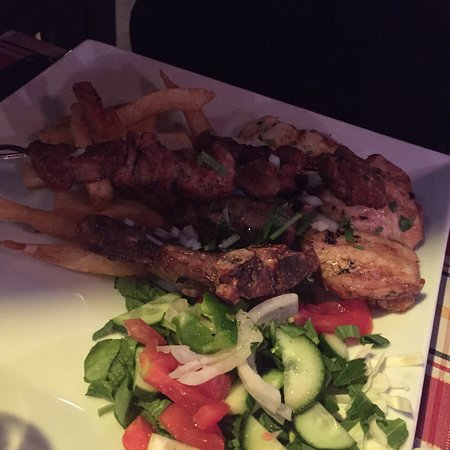 Excellent food and service. We had the suckling pig and chicken a la creme and both were delicious. The restaurant feels authentically Cypriot with a warm and welcoming atmosphere, Greek music, and a host (the owner) who is attentive and a genuinely lovely man.
Recommended ... We will be paying a return visit. 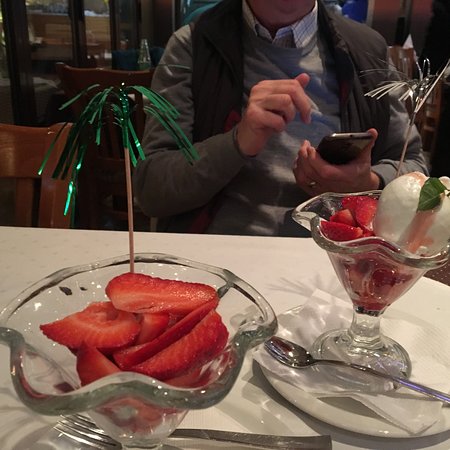 Welcomed in by non pushy extremely friendly staff. A good varied menu at reasonable prices. The food was served after just long enough that you know it’s freshly cooked, served very hot; and extremely tasty. Topped off with the best cocktails we’ve had so far in coral bay. Not the cheapest, but so far the best all round. We will be returning. Highly recommended “Peyia Tavern” is a family restaurant and is highly recommended, here you will have the opportunity to sample the “Traditional Special Meat Meze”, great dish for the meat lovers. The meat is cooked in the traditional Cypriot way (on the charcoal). The Special Meze is served one dish at a time by the Taverna staff which are family members. Be careful not to over face yourself with the bread, salad, dips and pourgouri (traditional couscous) which is served as an appetiser prior to the meat dishes. Also the taverna serves traditional dishes like "Halloumi", "Sieftalia" and "Stifado".

We tried it with family for the first time and really enjoyed it.
The welcome was friendly and service excellent.
2 of us had the meze which was superb and well timed.
The Stifado deserves special mention.
We will be back as soon as we can. 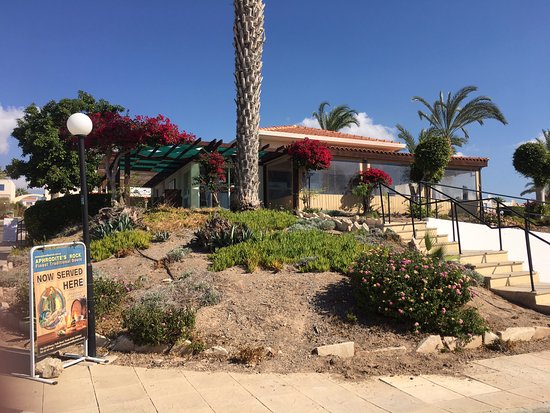 A family run Bistro with warm and friendly staff who are always happy to go the extra mile to ensure your experience is as good as it can be with us. We are open for Breakfast Lunch and dinner and usually have themed meal and entertainment evenings once a fortnight which are affordable and offer great food.Open also for Sunday lunches we are a popular destination and therefore booking is advisable. TRY US FOR AN UNFORGETTABLE EXPERIENCE.

After Reading reviews, decided go down check the menu out and have lunch. First impressions, not very welcoming, Seating area outside old and worn. Inside looked ok but there were a few cats on seats dotted about the place, ok if youre a cat lover but for me not ok, as its an eating area. Theres no kids menu, which was a dissapointment. We had burger, pizza and ham and cheese melts, all were ok, about on par with a wetherspoons. Nothing special to tempt me go back. Maybe evenings are better ???? If youre staying in the apartments, i can see why you would eat there. If not then id stay on the strip.

ONIRO By The Sea is an original chillout bar with spectacular sea caves views where you can find delicious bites, original cocktails and refreshing ideas.

Went around sunset time and the view was absolutely spectacular! You may want to arrive early though because there's usually a waiting queue for a table.
We only had drinks but the food coming out of the kitchen looked and smelled delicious.
A well looked after place, with a great service team and a happy buzz to it.
I would definitely recommend a visit.