Where to Eat in Passau: The Best Restaurants and Bars

Known as Dreiflüssestadt (City of Three Rivers), Passau is the place where the Danube meets the Inn and the Ilz. The picturesque city lies in Germany’s far southeast corner near the Austrian border. Settled since prehistory and a former hub of the salt trade, it became the Roman village of Batavis, then later the Holy Roman Empire’s largest diocese and a sword-making center. Saint Stephan’s Cathedral, home of the world’s second-largest cathedral organ, is one of Passau’s favorite attractions.
Things to do in Passau 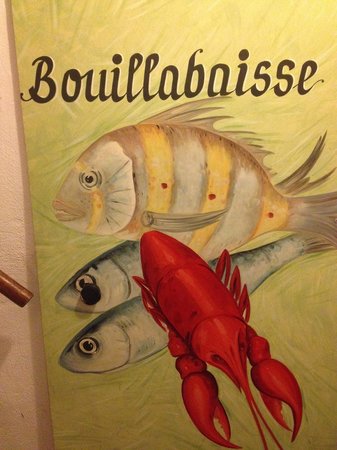 Bouillabaisse is in the pedestrian zone in old town Passau, near to shopping and night life. Chef Stubler and his wife Ursula create a warm environment to serve their fish centric cuisine. Being from Seattle, we are particular about our fish and the cuisine was up to standard. We shared a small small serving of the restaurant's namesake and two large grilled sardines for starters. The soup was good, the sardines perfectly done. Jackie had a whole sole and I had calamari in garlic butter. With wine, beer schnapps and a cappuccino our bill for two was under €80. We engaged with Ursula and a neighboring table of friendly locals. An all round excellent evening, and perfect for Jackie's birthday. 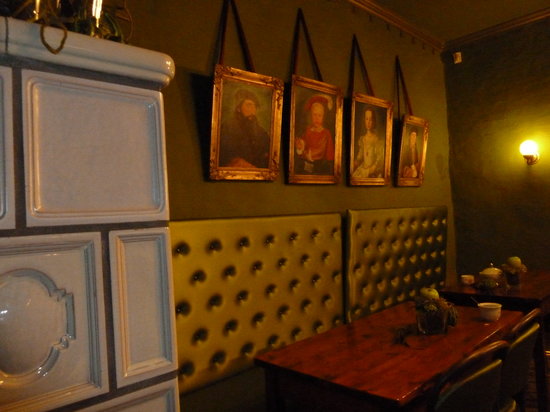 We had sought out to eat dinner there however, their menu was little bites ( Sandwich, salad, five appetizers, dumplings in sauce, venison sausages, desserts, wines, coffees). We pondered whether to stay as we didn't think there would be enough food for a dinner. Much to our surprise , the dumplings were plentiful, the venison sausages with sauerkraut were more than enough to and, the trout spread ( delicious) and Spanish GSM were huge portions and delicious! The prices are very fair and the service delightful. A hidden gem 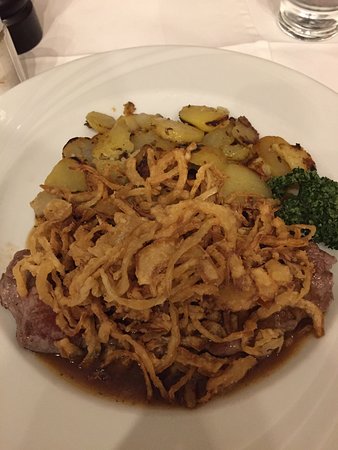 We walked into this restaurant with a waiter who had no interest in providing quality service. Apparently, he was busy and it seemed he was the only one serving the outdoor area. He might be overwhelmed. However, he was always in a rush, answered questions in only single word, and would not accommodate our requests. Fine. 20 minutes after we finished our meal, we were still waiting for the waiter coming to take the dessert order. I finally got fed up and told the other waiter that we had been waiting for a long time for the dessert order.
Food quality is just ok. My dish was a bit overly salty. But the dessert was great.
Finally -- we never got the bill and had to go inside to pay the bill after another 15 minutes waiting.
Avoid this restaurant. 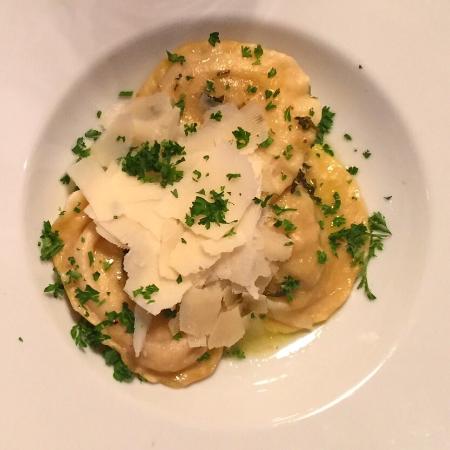 We ate here on the recommendation of our hotel who suggested here when we asked where they would eat. This was an excellent recommendation and I'm not sure we would have found it. There are two parts, one a front cafe and the other round the side into a restaurant and a lovely galleried courtyard which is were we ate. There was no menu in English but the waitress was very helpful and knowledgeable about both the food and the wine they offer. We had one of the best meals we've had in ages, the antipasti platter was excellent and my grilled fish very good indeed. My husband's goulash type stew was also excellent. All in all this isn't the cheapest place to eat but for the quality and the service it was good value. 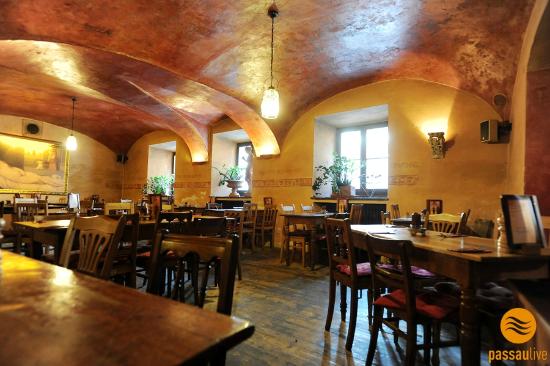 We went there the second time within this year as we really like the vaulted cellar like space. They know how to light this well and mainly used candle lights to emphases the brick columns and tables.
We only order two pastes! However, we forgot how large the portions are. We waited for the pasts to arrive while we were having a prosecco and olives. Staff are young and attentive. Nothing seems to be a problem, not even the language. We had a good bottle of Italian red. The place fills up very quickly after 18:00 hours, mainly with uni students. They do salads, pastas, and piazzas. Choice is very good as for the price we found it very reasonable. 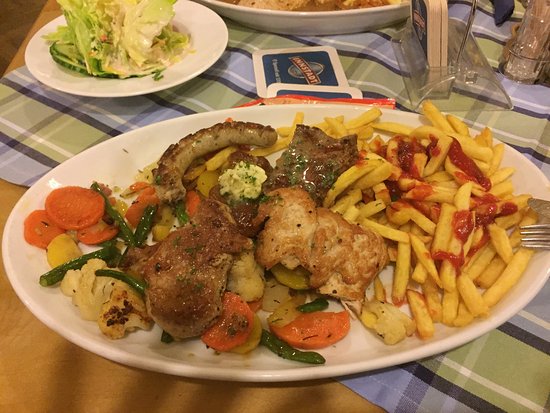 Bayerischer Lowe is a strait Bierhaus in Passau. Nobody expects light meals here, and food is really good. We had sausages and schnitzels and did not regret. The meals were extremely delicious with a large weiss biers. Nice restaurant on the square, with outdoor Seating that faces west--which means it was nice and toasty sitting in the sun during dinner. The restaurant is right on a little square, with a roundabout that encircles the cable supports for the bridge crossing the Danube. It was under construction while we visited, so the view was impacted, but will be lovely once all the equipment and materials are gone. There are lots of umbrellas and some shade, but those were all taken so...friendly waiters although service was a bit slow--it was pretty busy when we were there. Ordered some beers--they arrived nice and cold, so we enjoyed that. Mainly traditional German food--lots of pork, sausages, etc. Food arrived relatively quickly once we ordered. nothing spectacular, although the cranberry sauce with the schnitzel was pretty good (a favorite of the local bees!) Low key atmosphere. Lots of people out enjoying the evening. Would eat here again. 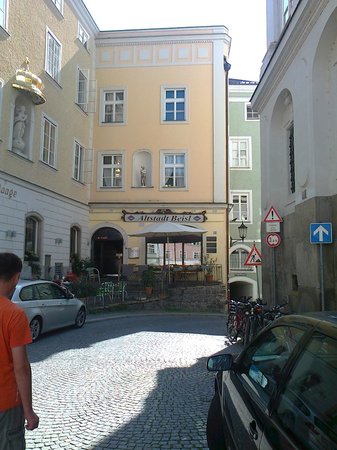 Dining outside was a delight. We arrived late afternoon when other restaurants weren't open. Rain had subsided so we were given cushions for our chairs. Ground pumpkin seed covered schnitzel was tender and delicious. My daughter had very tasty goulash. A smartly dressed woman took care of everything for us. We were both very happy with our unique experience here. We stopped in for a drink and ended up staying for dinner. Cool and trendy inside and a beautiful garden, where we sat for dinner. Excellent wine list. Friendly service and great food. The iberico pork chop was delicious. All the choices are imaginative and contain the freshest ingredients (we saw them bringing in the mushrooms at 5:30pm). There are many good restaurants in this small town, this is an excellent one! 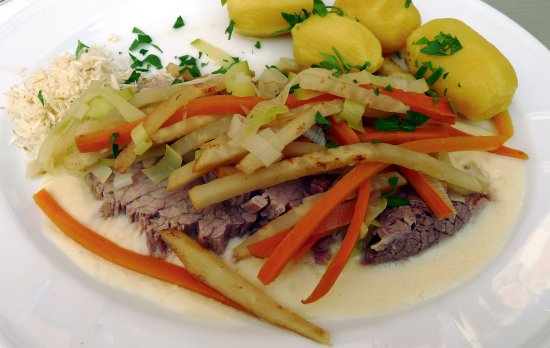 I asked a local outside the St. Stephen’s Cathedral for the name of a restaurant that served traditional Bavarian food. We decided to try it and was not disappointed. There is Seating indoors and outdoors. Every day there is a special for 6.90 Euros per person. We went for the specials which included a salad with green beans and potatoes and fried potato sticks with sauerkraut. Both were very good. We also sampled the local beer. This restaurant was damaged heavily during the 2013 floods but has been rebuilt. Attached to the restaurant is a pension (hotel) that can accommodate up to twenty people in its seven rooms. The restaurant is within walking distance from the Cathedral.