Where to Eat in Heidelberg: The Best Restaurants and Bars

Home to the oldest university in Germany, Heidelberg was hit hard during 17th-century wars and rebuilt in the 18th century with baroque buildings. For a pleasant walk, stroll through the historic city center's Gothic streets. Be sure to take in Heidelberg Castle, the symbolic heart of the city; Alte Brucke, a beautiful 18th-century bridge; and the Student Jail. Built as long ago as the 16th century, it was used to keep mischievous students off the streets for three days to a month at a time. And they say Penn State is the number-one party school!
Things to do in Heidelberg 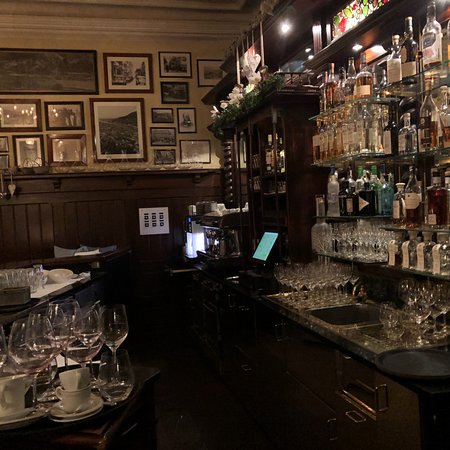 Traditional fine-dining restaurant with hotel rooms located directly in the center of the old town of Heidelberg. You will find the ideal place to sit back, relax and enjoy!

We spontaneously chose this place and were lucky enough to grab the only free table (a reservation didn't show up). We really enjoyed the service, the food (particularly the mains) was excellent but that was a must considering the stiff prices. We got a great recommendation for Aperitifs also. The only downside is that every now and then cars are rolling through the narrow cobblestone street, which can be a little annoying, but that's not the restaurant's fault... 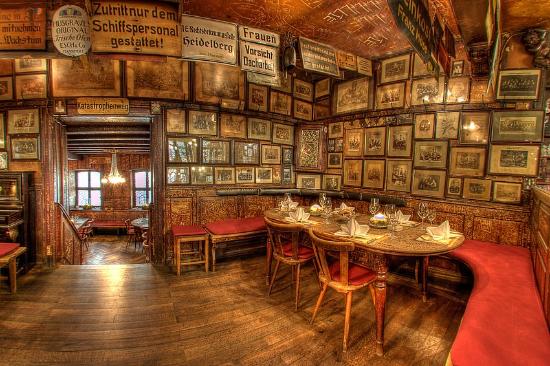 The service was a bit slow. The building is old and historic, which I guess is the point. The food was authentic but heavy portions and didn't deal in the subtle in terms of portion size, flavors, etc. Good for a casual night out. 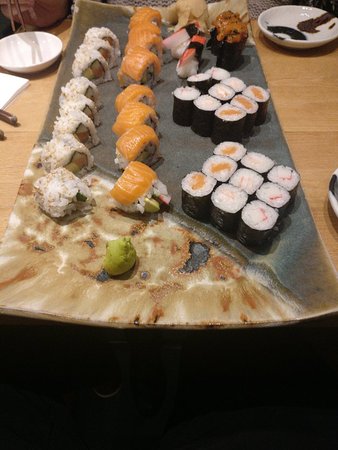 Reviewed By Stefanie B - Karlsruhe

I visited SameSame together with a good friend. We are both big sushi fans and therefore were pretty excited as we visited the place. The place is pretty small which was no problem, just the wooden seats are a bit uncomfortable; maybe it would be a good idea to offer some kind of covers.
I took a menu with a miso soup and a mixed sushi plate which was really good and tasty. The only thing is that the price for my meal seemed to be quite high. So I might come back but then for lunch as they have good offers for lunch.
The staff was very very friendly, I had the feeling I was really taken good care of! 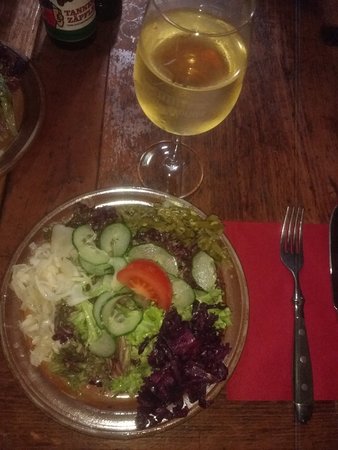 I come here every time I’m in Heidelberg because it is a classic. Great German food and beer. Bring your appetite because portions are large. And the atmosphere is wonderful - you never know who you’ll be seated next to - but that’s part of the fun. 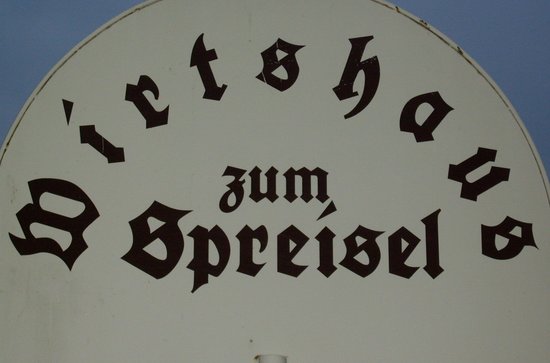 In a town with a high number of tourists it was pleasing to find a restaurant offering a genuinely German atmosphere within an old well preserved building as well as a menu of hearty German food served in generous portions. The beer on tap is good (Adler) and both our meals more than adequate in size and taste. The restaurant is cosy with sectioned areas for diners; unlike many English pubs whose interiors have been gutted for reasons of profit. Service was satisfactory but not quick. Overall heartily recommended. 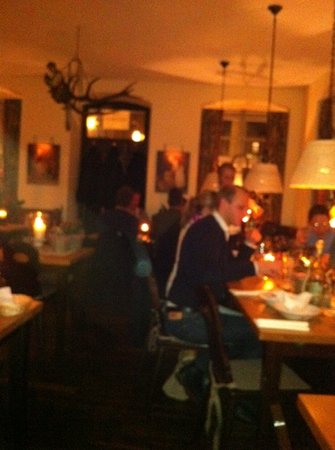 In an early 18th-century town house on the square in front of the Old Bridge in Heidelberg, the "Wirtshaus zum Nepomuk" welcomes its guests with familiar hospitality and good traditional german food. In the cosy restauarnt you will find regional specialties such as "Schwäbischer Zweibelrostbraten" - slices of argentinian beef with onions with homemade "Spätzle" or "roulade" - filled beef-roll - on homemade red cabbage and potato pots and much more. The varied evening menu shows the whole variety of the regional cuisine of Baden and the Palatinate. The inviting ambience in the inn and the quaint hunting lodge provides an ideal setting to dine comfortably with friends and family or to celebrate one or the other festival.

We have been visiting Heidelberg and at lunchtime we have been near the old bidge and looked for a nice restaurant. Just beside this nice door we found the restaurant "Wirtshaus zum Nepomuk". We could sit outside with nice sun protection. The waiters have been...MoreThank you for this wonderful review and hopefully you'll come eback ! 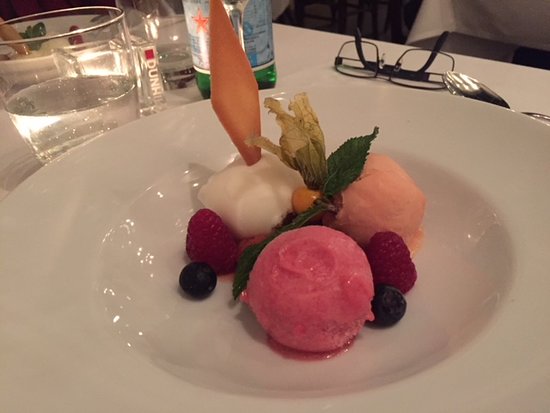 The restaurant and vinotheque Oskar appears to have a good reputation in the Heidelberg F&B scene, so we decided to drop in for dinner, as they only open in the evenings from 1800 hours onwards (closed Sundays).
Guests can opt for a menu, or order from an à la carte menu limited to seasonal ingredients, and a few dishes prepared Mediterranean style.
The service is generally friendly, but the attitude of the some staff occasionally borders on "laissez-faire".
We weren't sure if we wanted the Silvaner or Grauburgunder (both were house wines) to accompany our meal, so we requested a small sip of each. Oskar being a vinotheque, we figured it was straightforward request (just pour a sip from each open bottle). Our waiter had to "check with someone higher up", and eventually returned with two 0.1L glasses of only the Silvaner, which was not what we asked for. What about the Grauburgunder?? It took us only one sip to discover that the Silvaner was too dry, and went with the Grauburgunder, which is generally a "safe" choice.
For appetizers, we ordered a warm Pulpo salad, and the goat cheese gratin on a bed of greens. We decided on fish for our main course. There were two types listed on the menu, but as Oskar's supplier didn't deliver, they could only offer us one type - the "Dorade".
We were engrossed in conversation, so we took longer than usual to finish our appetizers (which were tasty). The staff attempted twice to remove our plates, and finally insisted because our main course was ready and getting cold (fair enough).
I was happy with how my Dorade was prepared - the skin was crunchy, and the filet rimmed with a crispy border, while the insides were tender and succulent.
Foodwise, Oskar is a strong 4-star - kudos to the chefs! However, for the prices they are charging, there was one too many awkward moments in their service, hence only 3 points overall. 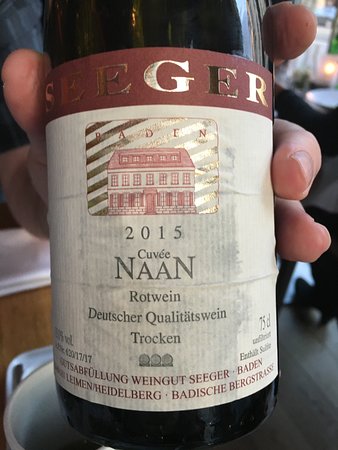 Business function, event or just good dining? Visit our best rated Restaurant, Bar, Bistro, our cosy Lounge or the outstanding Roof-Terrace in the Centre of Heidelberg. The Qube Restaurant stands for imaginative, regional as well as international cuisine, setting a high value on freshness and naturalness.

Maybe all places in Europe have better salads than the US - the ingredients just seem to taste more organic and fresh. But, we had a great lite dinner here during our 2-day stay in Heidelberg. Rocket salad was very good - sundried tomatoes really hit the spot. Complimentary bread and olive oil. Iced tea was good but expensive (5 E) vs surrounding areas we visited. Caters to a younger crowd, it seems. 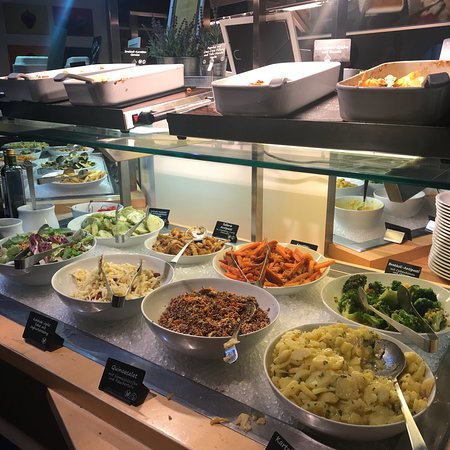 I ate twice in this restaurant within three days and was delighted with the offerings. They provide fixed hot meals and also a delicious large buffet. Vegan items are explicitly marked The food is fresh, healthy, nutritious, tasty and presented well. The offerings at the buffet differed the two times I went, and I appreciated having new items to try. The restaurant is quite popular and quite busy so slow at times to get a table or to pay at the counter during busy periods. Staff are friendly and polite. Great selection of desserts. 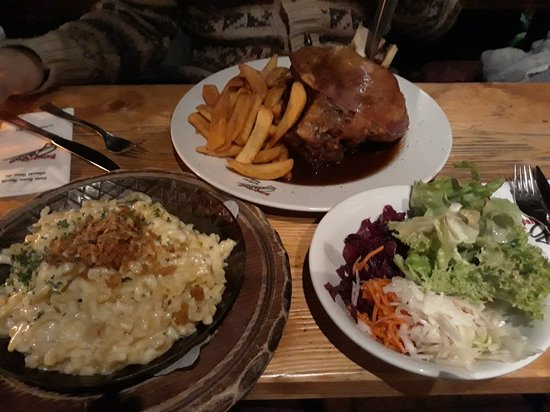 Our family of 8 had lunch at Palmbrau Gasse. Our order included schnitzel (pork), Nuremberg sausages, and a pork knuckle (which they claim is their specialty). The sausages were similar to what we'd had elsewhere, but the schnitzel and pork knuckle were disappointing. Service was pleasant and Palmbrau Gasse seems popular with tourists.