Where to Eat in Gweedore: The Best Restaurants and Bars

Gweedore (officially known by its Irish language name, Gaoth Dobhair, Irish pronunciation: [ˌɡˠi ˈd̪ˠoːɾʲ]) is an Irish-speaking parish located on the Atlantic coast of County Donegal in the Republic of Ireland. Gweedore stretches some 26 kilometres (16 mi) from Meenaclady in the north to Crolly in the south and around 14 kilometres (9 mi) from Dunlewey in the east to Magheraclogher in the west, and is one of Europe's most densely populated rural areas. It is the largest Irish-speaking parish in Ireland with a population of around 4,065, and is also the home of the northwest regional studios of the Irish-language radio service RTÉ Raidió na Gaeltachta, as well as an external campus of NUI Galway. Gweedore includes the villages Bunbeg, Derrybeg, Dunlewey, Crolly and Brinalack, and sits in the shade of Donegal's highest peak, Errigal.
Things to do in Gweedore Visited here on recommendation while we were staying in a rented cottage a few miles away.
For starters I chose crab claws which were pretty uninspiring.
My partner opted for potato skins which looked like they had come from a freezer shop.
Both our starters and main dishes were served on cold plates, this is never acceptable in my opinion and demonstrates lack of care for the customer.
My partner opted for Hennessy chicken, at almost 20€ we were expecting something special, this was not the case, bland sauce, mediocre piece of chicken and the dish was literally smothered in mushrooms which overwhelmed the whole flavour of this dish, this was served with a portion of just okay chips again in a cold dish.
My main was scampi tails again priced at almost 20€, this dish was terrible!
The scampi was fried in thick and greasy batter, I attempted to remove some of the batter but it was stuck to the tiniest and mushiest scampi tails....really awful. The grease hardened on the cold plate and was so unappetising.
I informed the waitress that I was unhappy with the dish, she told me she would inform chef but did not feedback to me.
When I enquired what chefs response was she babbled some excuse that is how the dish was served!! Apalling service.
The American owner was fully aware of these difficulties as he was stood at the bar and made no attempt to intervene or rectify.
We were charged 72€ for this Shambles of a meal, this include 2 small wines and one and a half pints of Guinness.
Totally overpriced and unappetising.
I would not reccomend 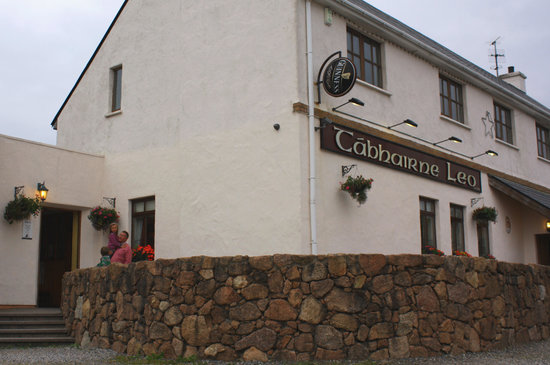 We stopped by Leo's looking for some lunch, didn't realise it was a famous spot... food was great, music was even better! 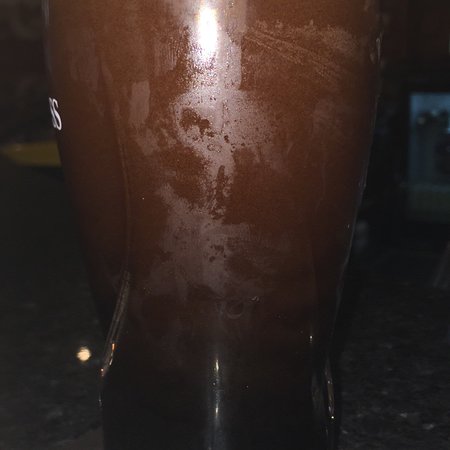 One of the good things about eating out in rural Ireland is that you always get healthy portions and the Bay View is no exception .I ordered the home made burger with pepper sauce and it arrived with two burgers on a bed of mash potato and pepper sauce.It also came with a side of chips and mixed veg.This large portion was very welcoming on a cold winter's day.The burger was very good and all food was hot and served by very pleasant staff.Will return on my next visit to Dungloe. 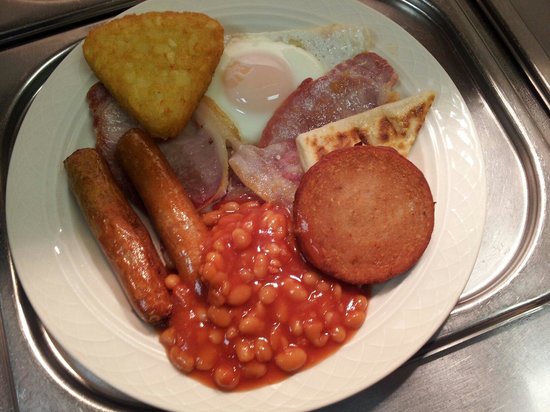 Called in for something to eat with my husband recently. The place was quiet, we were served quickly by pleasant waitress. Between us we ordered house curry from the specials board and fish and chips. Curry was completely tasteless, totally bland and inedible and the I am not convinced the fish was fresh. It tasted like frozen food and was full of little bones. We left having barely touched our food. I'd think twice before returning! 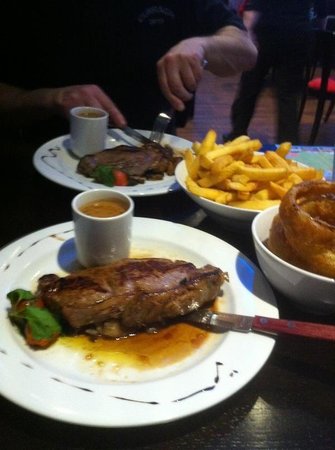 Very pleasant and unexpected surprise, in the top end of Donegal. Friendly and obliging staff; very good and tasty food with excellent presentation and very good value for money. HIghly recommend it.

Visited the stepping stone at the bank today for lunch. Myself, the hubby and 2 nephews.
From we arrived the staff where very attentive.
We ordered burgers, chips, pasta and cajan chicken pannini.
The food came out in good time.
First impressions was that the food looked and smelt amazing. Presentation 1st class.
Burgers were freshly made and full of flavour. The bacon and dubliner cheese was delish.
Kids loved their pasta and pannini.
Very very reasonable price 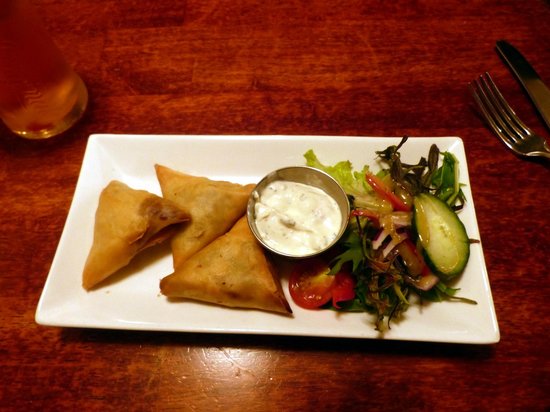 Friendly staff give brilliant service and the food is excellent! My advice is to book your table so you don’t have to wait too long. The mussels are excellent and the bowl is over flowing when brought to the table. Prices are inline with most restaurants and the drink is great! Try some of the local craft lagers! 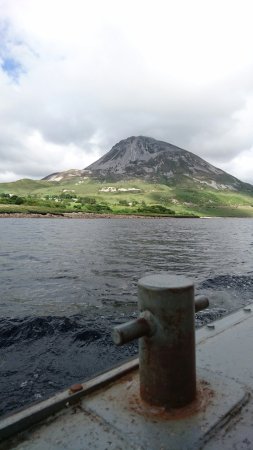 Food was very basic, deep fried, microwaveable cuisine. We were tourists and was expecting something a little better. Bar man was not overly friendly and didn't make you feel welcome. Overall it was an OK experience and nothing to shout about. 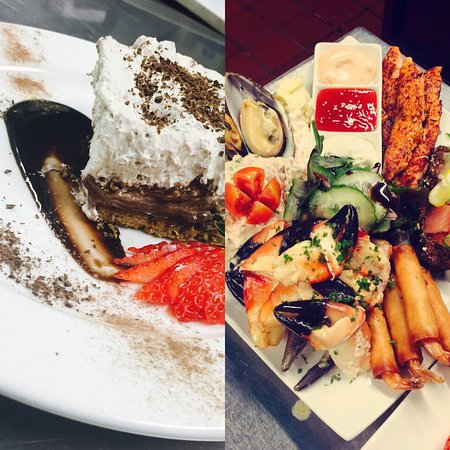 Family run pub with live entertainment every weekend. Friendly, relaxed bar with food served each day from 12-9pm - Daytime menu from 12-4 serving breakfasts, light bites and lunches and Evening menu daily from 4-9pm. Vegetarian & Gluten free dietary requirements catered for. Upstairs restaurant overlooks the villages Main Street. Stove fires in bar & restaurant for that homely feel. Most, if not all of the staff speak fluent Irish, so feel free to speak your cupla focal.As a family run business we aim to provide a friendly, laid back, more personal service. We hope that all our customers enjoy our hospitality and call back to see us again.

Not the most elegant or modern of places but what it lacks in that department it more than makes up for in a good hearty meal. I have had the turkey/ham a couple of times and both times it was great and very good value for money. I'd imagine we will be back a few times in the months and years to come.. even if it is just to try the burgers which I noticed when we were last in because they look fantastic. Keep it up.. 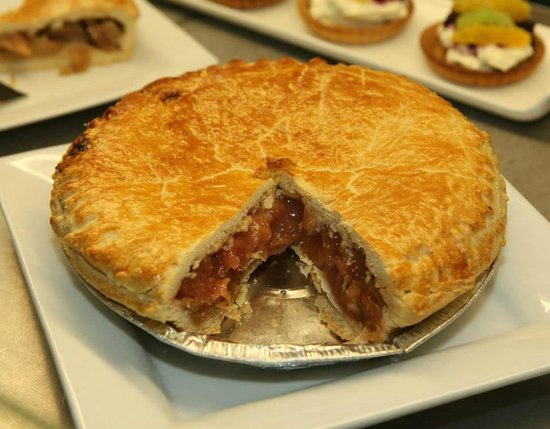 Staff pleasant, food, especially the chicken in our dishes was highly processed and totally tasteless, we had two different chicken dishes one was on bread and the other was in a hot pot but the chickened looked nothing like chicken in both dishes and the pieces were uniform. Won't be eating there again. 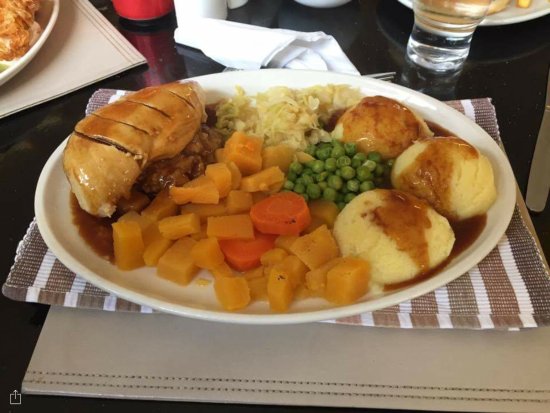 Walking around Dunfanaghy, we decided we wanted a cup of coffee and ventured into An Chistin. We weren't offered menus, but that might be my fault for asking for a coffee and a hot chocolate. We weren't asked if we wanted anything to eat, and there was no evidence of buns or scones on display. The coffee was grand, and my husband's hot chocolate (containing marshmallows, which he hadn't had a chance to decline) was piping hot. A further note to add was that the Ladies' Toilet cleaning rota checklist had not been completed for 5 days and the bin definitely needed emptying. I don't think we'll revisit, as there are other coffee shops in the town.