Where to Eat in Anderlecht: The Best Restaurants and Bars

Anderlecht (Dutch pronunciation: [ˈɑndərˌlɛxt]; French pronunciation: ​[ɑ̃dɛʁlɛkt]) is one of the nineteen municipalities of the Brussels-Capital Region. Located in the southwest of the city, it is bordered by the City of Brussels, Dilbeek, Forest, Molenbeek-Saint-Jean, Saint-Gilles and Sint-Pieters-Leeuw. There are several historically and architecturally distinct districts within the Anderlecht municipality. In common with all the Brussels municipalities, it is legally bilingual (French–Dutch).
Things to do in Anderlecht 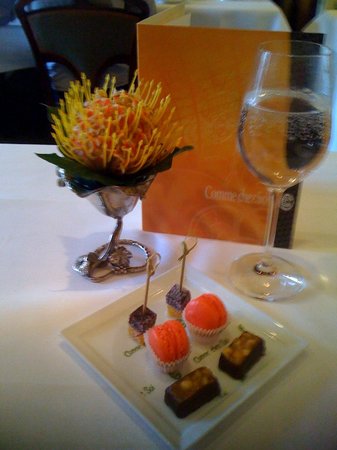 The food was very good. But not a patch in other restaurants I have eaten at with Michelin stars. Everything else was frankly a bit of a farce. We almost left as the waiter and the staff got increasingly confused over a dietary requirement they had checked twice in advance. They then told us that they don’t really bother to accommodate as some people say they are gluten-intolerant and then order pancakes. My friend has a religious dietary restriction. In the end, they did provide alternatives but it felt like too much effort. And then the bill was charged in Sterling when we requested to be charged in Euros. They acknowledged the bad service but did nothing about it. We won’t go back and won’t be recommending. Since 20years our restaurant have the pleasure to serve you a local cooking in a "belgo-belge" decoration, our specialty, the mussels, prepared in more then 30 kinds, built our reputation and well outside our borders. In good weather, a beautiful garden will welcome you.Special in Brussels, you can compose yourself your Menu "à la carte" for 29€: starter, main course and dessert to choose in the menu.

Le Chou de Bruxelles is famous for its mussels with French fries and other typical Belgian dishes. Since I'm a big fan of mussels, I was really looking forward to an evening in this restaurant.
The interior of the restaurant is decorated with Belgian memorabilia, most notably a lot of decorations which are referring to Brussels' most famous statue: Manneken Pis. The restaurant is not very big and quite popular, so make sure to reserve a table if you want to have dinner on a weekend evening.
My friends and I all went for the dinner formula: starter, main course and dessert for 32 euro. A very sharp price, indeed. The carpaccio of Begian beef was nice, but the mussels with thyme where exceptional. Best mussels I had in my life. Nice touch: I got to wear a bib to make sure I didn't soil my clothes.
The tarte tatin I got as dessert was ok, but not really memorable. Loved the complementary limoncello. I always appreciate it when the restaurant offers you some free drinks!
It was awfully warm though in the restaurant. This was perhaps due to the fact that the tables are quite close to each other and the restaurant was fully packed.
Tip: You really, really have to order the mussels. 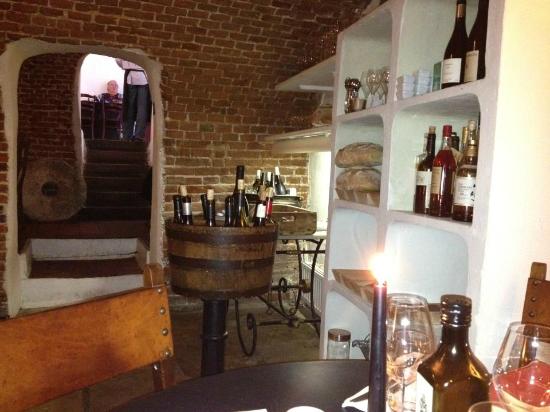 I booked this place for dinner on our wedding annivesary and was so looking forward to the experience given the great reviews. I noticed a number of couples walking into the restaurant asking for tables but they were turned away, which to me was impressive as most of the customer base seemed to be regulars. The staff were very helpful and had great knowledge of the menu. I asked about the beef/steak onglet and was asked how I would like it cooked? I replied 'medium' and then I was then informed that this would not be possible as the chef wouldn't allow this to happen and it had to be rare. This is the first time I have ever experienced this in any restaurant and I find it shocking as the paying customer, regardless of what the chef thinks or opinions on how something is cooked. I ended up with beef cheek and beetroot, the beef was lovely but there was far too much beetroot on the plate. To make matters worse, my wife had the pork chop and about half way through she noticed blood starting to seep out of the meat! Given the response to me wanting my steak being cooked how I would like it? The waiter was very polite and offered to change the pork but by this time we had seen enough, and we asked for the bill and left. There was no discount or refund offered for the undercooked pork, and as much as I find that dissapointing I really couldn't be bothered to argue this point on our anniversary. I was suprised by our experience as the place is lovely, the staff were knowledgable and the majority of the reviews looked fantastic. 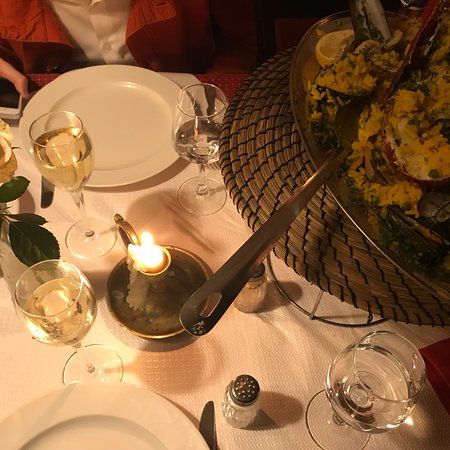 On my last trip to Brussels, I ate at The Lobster House, which is close by the famous Grand Place - often considered the most beautiful square in Europe.
It was an awesome meal - with freshly baked bread by Karim, the owner, fish Soup and the Grilled Mixed Fish Royal, which is a big serving meant for two persons. The Mixed Grill is offered together with paella. There was half a lobster, king prawns, shrimps, sea bass, salmon and cod fish. The lobster was very fresh, and tasty. The salmon was a little over cooked, as I often find it perfect with a little of the meat inside left slightly uncooked. Both and sea bass and cod were very nice.
I enjoyed the fish soup, and the bread very much too.
It was indeed an excellent meal. The Mixed Grill costs €49, but worth every penny of it. I would highly recommend for all who love seafood and fish.
Karim, the owner is very friendly and will help you with your order of the food.
When you are in Brussels, don't miss out having a big feast here.
How to find The Lobster House
Walk along Rue De La Montagne, and when you see the SUPERDRY Store, right on the opposite side, you find the LES GALERIES ROYALES DE Saint-Hubert, walk through the arcade, and on the first left turn, turn Left and you will find the sign - THE LOBSTER HOUSE. 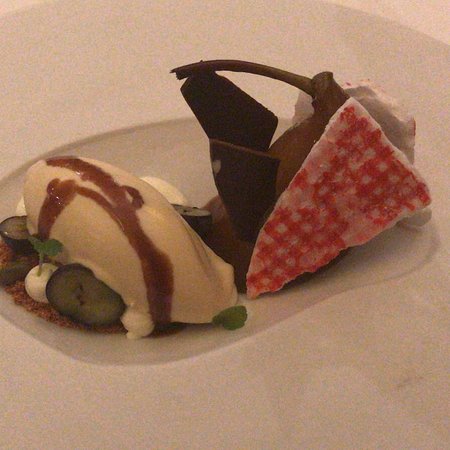 I went to the Alexander for a birthday lunch.
So I was very surprised to got all the restaurant place dedicated for this event! A small place!
Service was perfect for this big group. The food was very tasty, very creative, and artistically dressed! Every dish was a marvelous surprise. Wines where in perfect harmony with the different plates. Also the dishes plates were chosen in harmony with the food. So you can get there for an event of for a lovely diner. I recommend. ... and will be back soon! 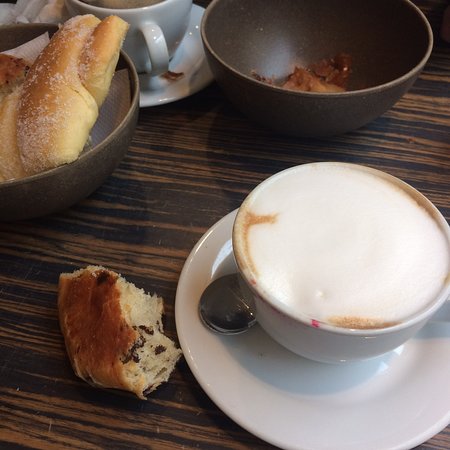 So sad we only got to visit here on the final 40 mins before we are to depart.
The female waitress was so genuinely chirpy and happy to serve us.
And the bakes of Kouign Amann and Chox with caramel cream. So heavenly good and my husband ( rarely) agreed with me when we are on the Eurostar. 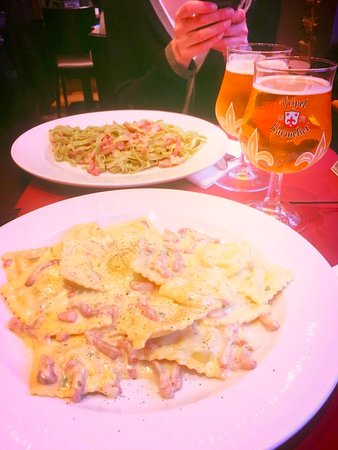 Absolutely the best pasta I’ve had- even in Italy! Patrizia is the chef and is a true gem!
Silvano takes care of every customer like family. Miriam, their daughter is superb. They are the sweetest Italian family! The waiters Joe and Nakita are so friendly and you feel like you are home. This is a must visit place when in Brussels! They are packed every night so make a reservation early! I recommend the squid ink pasta- my favorite bit you won’t be disappointed with anything as it’s all homemade with Amore! 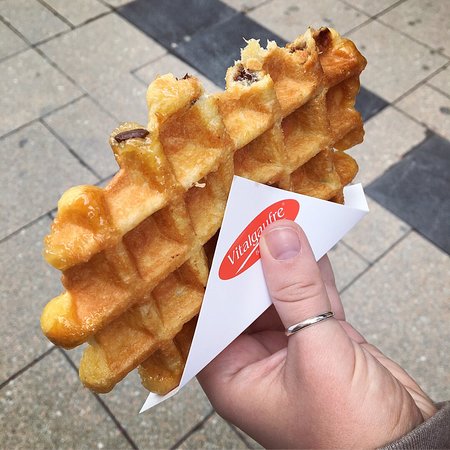 I went here based on the reviews and was happy with a waffle with chocolate sauce on and my daughter enjoyed hers with banana slices on too. They are quite busy on a busy tourist street with lots of main shops on. Enjoy taking a breather from your shopping for a tasty treat! 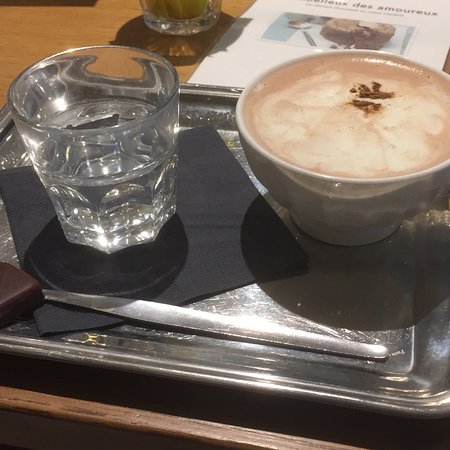 Worth it, as in worth the calories. We spent a day where we literally skipped lunch and just ate waffles, fries, and chocolate (when in Belgium...). Frederic Blondeel was not our favorite, but it offered the most sophisticated of the chocolates we tasted. 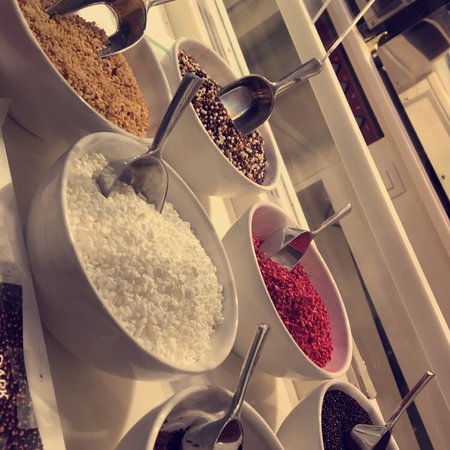 Our Maitre Chocolatier is preparing some delicious tablets, mendiants, mousses and other sweets in a traditional way. We are also organize workshop. We are happy to welcome you every day from 11.00 until 18.00.

Neuhaus is one of the many chocolatiers visitors can try in Brussels. This business was founded in 1857 by Swiss immigrant Jean Neuhaus and now includes over 1500 branches worldwide including the a handful of branches scattered around the city centre.
Interestingly, Neuhaus claim to the creator of the popular Belgian praline chocolates. They also sell ganache, truffles and other chocolate treats. You can buy boxed sets or pick-and-match various chocolates that are available for purchase by the weight.
During our visit, we tried a cup of hot chocolate (4€) which was being heavily advertised at the shop. You can choose between milk and dark chocolate. We opted for dark which tasted pretty good. It is a bit milky but the chocolate tasted nice. It was enjoyed while walking around on a cold December day.
In the end, not the best hot chocolate we've ever tried but it was pretty good, potentially worth having again.