What to do and see in Phthiotis Region, Greece: The Best Places and Tips 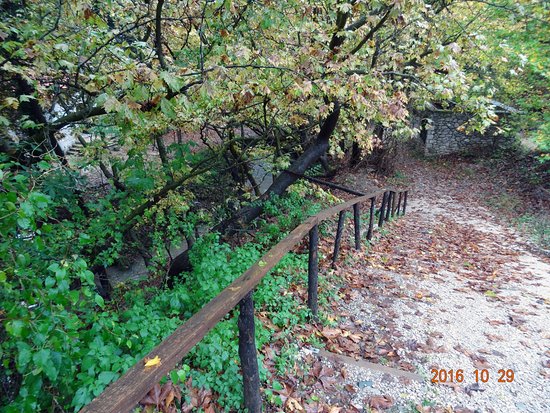 Reviewed By george a - Athens, Greece

What a fantastic job has been done to this wonderful park! We walked all of it in the middle of December with snow covering everything and still loved it and found a great number things of things to do and explore. The water mill, saw and hanging bridge at the start are a beautiful way to start. You then walk in the forest, next to the stream and we had a wonderful time looking for the next hand painted signs of the different activities. Too cold to try the flying fox or the trampoline, but we made a promise to come back in the summer... 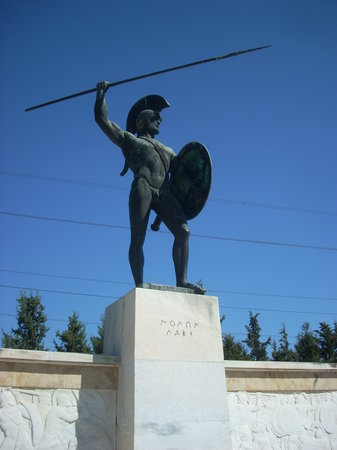 From a European perspective, Thermopylae is sometimes presented as a most important battle. While it was little more than a delaying action – 4000 Greeks holding off 300,000 Persians for three days before the Persians swept the field, the ability of the Greeks to inflict ten times as many casualties on the Persian army as they took, and the willingness of the band of 300 Spartans at the core of the Greek force to sacrifice their lives, served to rally Greek resistance against the Persian invasion, an invasion that foundered at the sea battle at Salamis and ended at the Battle of Platea a year later.
The Thermopylae Battlefield could be, perhaps should be, so much more than it is. It all seems a bit random as one comes down the Highway. One sign for the “Battlefield”, and then the large monument a short distance away.
To the visitor who is familiar with the battle itself, the site makes no sense. The Greeks achieved their three-day stalemate because they took a position in a narrow pass, which prevented the Persian army from outflanking and enveloping them. (On the third day, the Persians were able, with the help of a Greek guide, to send forces around the pass and then come up on the Greek rear.) But the battlefield as it exists today is NOT in a pass. There are high hills on one side, the other side is broad plain.
A map, by the “new” memorial provides an explanation. In the past 2500 years, the coastline has shifted about a half mile, which accounts for the open plain. It all makes sense if you recognize that the area you are standing in was much less broad during the battle. Many of the Persian soldiers drowned when they were caught between Greek forces they could not dislodge and Persian forces pushing them forward or not allowing retreat.
There are two monuments. The newer one (first photo) is on the side of the road nearer the water. You cannot miss it from the highway and it is easy to pull off and park there. And as mentoned above, I found the little map display there – in Greek and English – helped me understand where I was. But the monument itself – a wall perhaps 80’ long, with modern statues of dying soldiers and a couple of large reliefs of the battle, did nothing for me.
I think the main problem I had with it is the statue at its center (second photo) – its most eye catching element. A Greek soldier stands ready for battle, his 8’ spear raised to strike and his shield at the ready. But aside from the helmet, the soldier is nude. This is odd. Greek men competed in sports competition in the nude, but in battle, they wore armor and they wore sandals designed to give them traction as they stood their ground. Also, the shield is odd. It has a Medusa head on it. If one wants to honor the 300 Spartans who were the core force, it should have a Lambda on Lacedaemon as its device. And the man holds the shield at a right angle to his body, therefore giving no protection to himself or the man next to him on the line. An important function of a Greek shield was that it protected two soldiers. This shield position allows you to admire the soldier’s muscular torso, but again, both the shield position and the absence of clothes are worng.
As others have noted, you are likely to face aggressive beggars by this monument. Just say no.
Take the time to cross the highway – good thing traffic was light because there are no traffic lights -- and climb Kolonos Hill to the spot where the last Spartans fell. The path is well marked and the elevation is only 45’. At the top, you will find the much smaller old monument with its famous inscription, “Oh stranger, go tell the Spartans, that here we lie, faithful to our laws.” (3rd photo) The slab with the quote dates from the 1950’s, the quote probably from the time of the battle.
Standing here, with less traffic noise, no beggars and the view back up the battle plain, I found myself very moved, imagining the Greek and Persian lines on the plain in front of me. For me, this was the best part of the visit. (4th photo)
We also took the “Battlefield” turnoff. You only drive about 50’ for find parking. In the Golden Age of Greece, Thermopylae was known for its hot Springs and you park by one of them. It has been dammed and channeled. There’s a small hotel there and on a cool January day, some bathers were in hotel robes, but others were getting out of their cars to take a dip. The Springs are hot and the sulphur smell is thick.
We walked up the fields back toward Kolonos Hill for about 100 yards. It was wide open, nothing was marked.
I wish the Greek government had the money to put some markers on the field; indicating where events might have occurred. I wish they could afford to have a staff person at the main monument to discourage the beggars. I wish some enterprising retired person with a love of history would organize a tour, or maybe two or three a day, to tell the story of the battle and Leonidas as a leader. Maybe that happens in the summer. A person with moderate acting skills could bring that site completely to life. It’s an important place and it deserves more.
In a way, the nude warrior status is a metaphor for the state Thermopylae is in today. He has been sent into battle completely underdressed and unprepared as if no one could afford to do it right.
I am glad we went there because it’s an important place, but the state of the site does not match that importance. 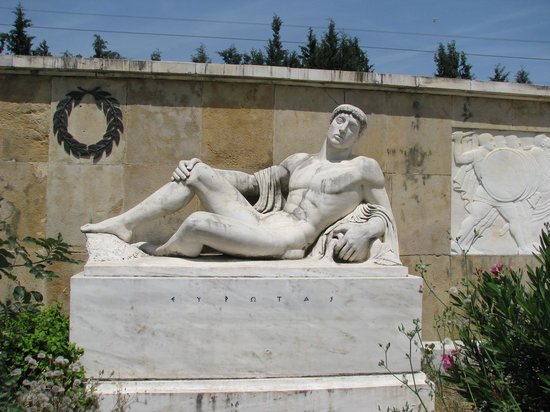 This small monument commemorates the battle in 480 B.C. in which a small band of about Spartan soldiers held off a huge Persian army for three days. The delay was long enough to allow for the successful defense of Athens against the Persians.

Thermopyles is known as a scared place.
In 480 B.C a battle between Greeks and Persians took place at Thermopyles. Leonidas, king of Sparta fought against the Persians.
This monument to Leonidas was erected in 1955. It features a bronze statue of Leonidas.
A sign, under the statue, reads : "ΜΟΛΩΝ ΛΑΒΕ" ("Come and get it"), which the Spartans said when the Persians asked them to put down their weapons at the start of the Battle of Thermopylae. 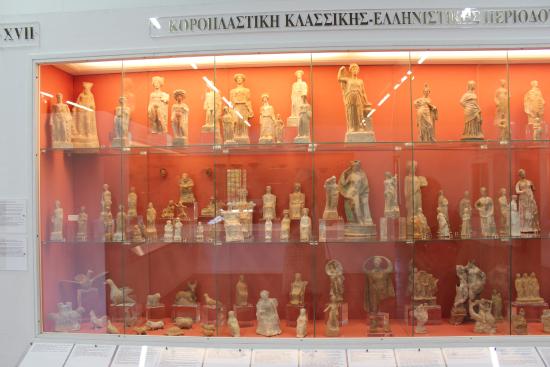 Very nice museam on the hill of the Lamia city. It's proving a broad knowledge from ancestors till the newest ages. The information include the whole Fthiotida not only the Lamia 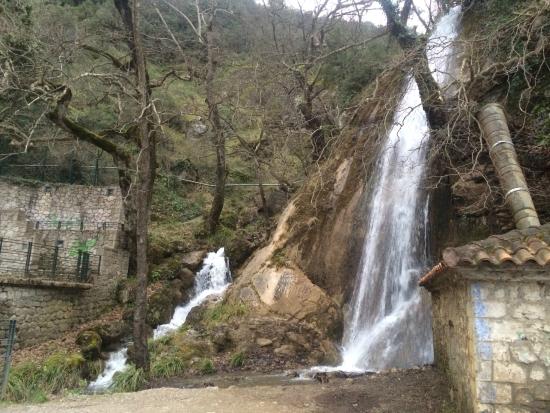 Oitis National Park is a great area of green with lots of great views and some Waterfalls. It is a huge area of Forests and Mountains south from Loutra Ipatis and Ipati village. Great place for hiking and mountaineering. 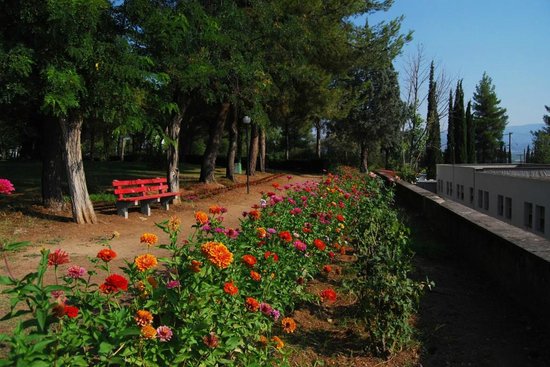 Very nice park in the middle of Loutra Ipatis. While in the town it is nearly impossible to miss this place.
There is the thermal spring source in the park, unfortunately it is closed and surrounded by this weird looking building (from distance it looks like an UFO).
All in all it is a really nice little park to visit, the only let down is that you don't feel the "closeness" with the Springs. 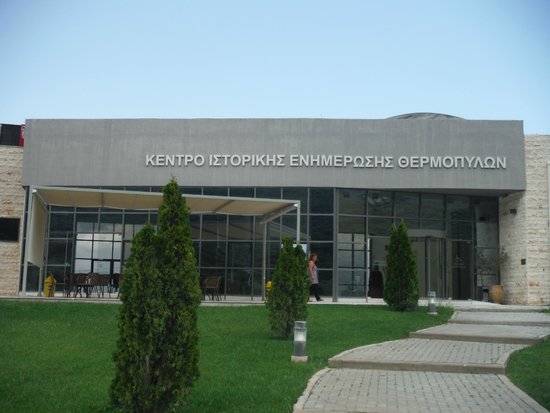 Must see this great historical museum. We visited it July 2014 as a part of Albanian and Greek tour ( Sarajevo, Podgorica, Tirana, Saranda, Patras, Olympia, Sparta, Mycenae, Athens, Thermopylae and Thessaloniki). Two weeks by car came back to Sarajevo through Macedonia and Serbia. An old monastery very well maintained. Interesting post byzantine architecture, excellent views around, green mountainous landscape. Take your time and enjoy the peaceful religious atmosphere. Nearby there is a Natural History museum and a nice enclosure with swans and peacocks. Beautiful historic bridge of Gorgopotamos. When I arrived there it was just amazing to look at this beautiful bridge and listen to the river next to it.
Just an amazing place and mesmerizing surroundings.
There are trains passing the bridge approximately every 30-40 minutes. And it is really worth seeing.
Total recommend. 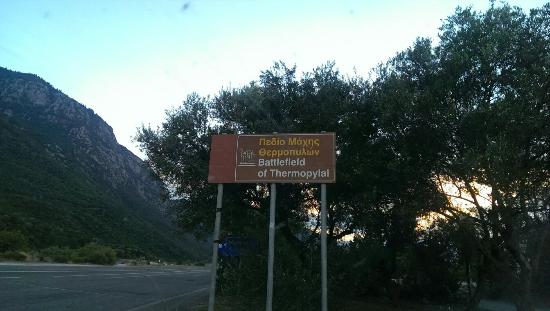 The Historical Information Centre of Thermopylae was founded in 2010 and constitutes a real jewel for the Municipality of Lamia. It is set beside the great monument of Leonidas.The visitor entering the Centre can browse three rooms with applications and Educational material based on the narrations of Herodotus and archaeological researches.Inside the Centre works a fully equipped coffee-shop.

We came across this place purely by accident when we drove to visit the battle site of Thermopylae. The centre is located about 200 metres east of the Leonidas monument. Because it is not signposted from the main road, it is easily overlooked and appeared closed had I not investigated the building further.
The centre has an interactive/video exhibit which highlight the events before, during, and after the battle. There is also a small gift shop, cafeteria, and washrooms available. The staff were very friendly, most helpful and the admission was only €3. If the centre was better signposted then it will attract a good deal more visitors and is well worth the visit if you want to know more about this epic battle.