What to do and see in Oudtshoorn, South Africa: The Best Places and Tips

Oudtshoorn, the "ostrich capital of the world", is a town in the Western Cape province of South Africa, located between the Swartberg mountains to the north and the Outeniqua Mountains to the south. Two ostrich-feather booms, during 1865-1870 and 1900-1914, truly established the settlement. With approximately 60,000 inhabitants, it is the largest town in the Little Karoo region. The town's economy is primarily reliant on the ostrich farming and tourism industries. Oudtshoorn is home to the world's largest ostrich population, with a number of specialized ostrich breeding farms, such as the Safari Show Farm and the Highgate Ostrich Show Farm.
Restaurants in Oudtshoorn 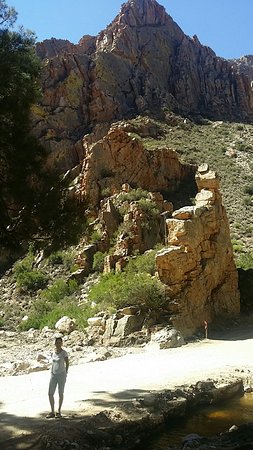 We went on Swartberg Pass with a special van and a trained driver and I would not dare driving there myself. The road is not paved and they keep it like that.
The views from the top of the pass are very beautiful. It was also interesting to have short walk and see the interesting rock formations along the road, especially the Wall of Fire. 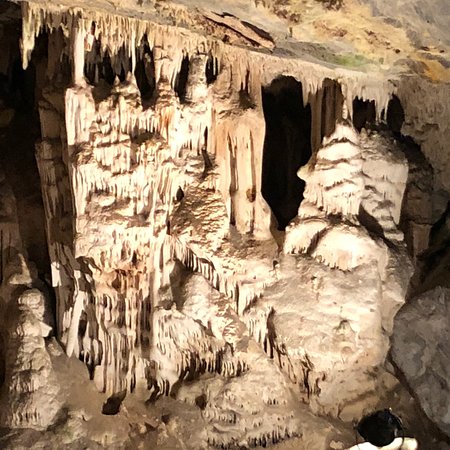 Though damaged through shortsighted tourism schemes in the 1960s, these caves are still worth a visit for their eerie dark tunnels and stunning limestone formations.

Cango caves are very beautiful with amazing formations.
It was a bit disappointing that the caves are too dark and there isn't enough lighting on the more interesting parts. They do light them for short periods, could not understand if it's done to protect the cave or in order to surprise the visitors. But I do know that similar caves in the world are lit in a much more impressive way.
Our guide was John and visiting the cave with him was a lot of fun. 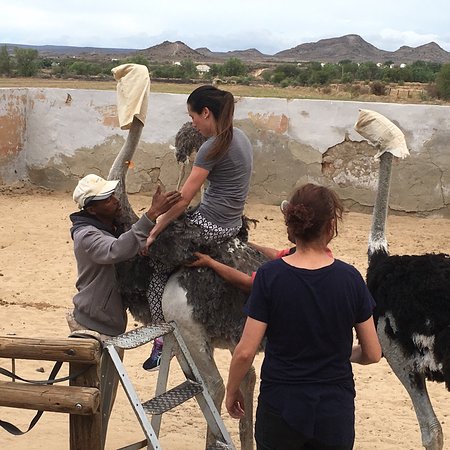 It's true. Highgate is the world's oldest ostrich show farm. But it is a working farm too. So we don't do things for show. We give you the real African farm experience. Our guided tour takes approx. 75 minutes & an expert guide will show you our modern breeding methods, how the largest eggs of any living bird species are incubated, and see the hatching room. Experience the opportunity of hand feeding an Ostrich. Enjoy our Pepper Tree Restaurant! We take advantage ofour magnificent all-year round climate to set the tables under our ancient Peruvian pepper tree so the whole family dines al fresco-style while enjoying the great outdoors. Catch your breath and visit our shop selling only genuine, South African-made products, many of which are produced by our skilled staff on the farm using our own resources. From beautiful decoupage ostrich eggs to delicate ostrich leather products. We are situated 10km outside Oudtshoorn on the R328 road to Mossel Bay.

Spent a fun three hours here with our lovely tour guide. She was very knowledgeable and funny. Learnt so much about these birds and even get to sit on one or, if your adventurous, ride one!! Can highly recommend... 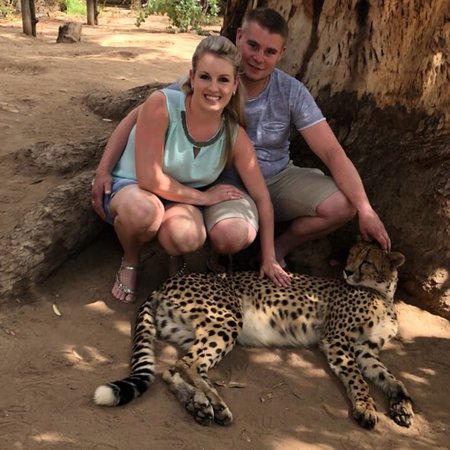 Cango Wildlife Ranch is internationally recognised as one of South Africa’s premier tourism attractions. Conveniently situated en route to the Cango Caves near Oudtshoorn, the Ranch offers visitors a huge variety of awe-inspiring activities at one location for a value-packed price – suitable for the whole family and open 365 days a year! In addition to our wonderful encounter programs, where you can meet an ambassador cheetah, the ranch also offers two Firsts: Lemur Falls – the first interactive Lemur experience in Africa! - and Crocodile Cage Diving - a World First - where you can test your mettle against the dangerous gaze of a Nile Crocodile via a steel cage lowered into their watery domain! As a PAAZA (Pan-African Association of Zoos and Aquaria) accredited facility, a proud member of WAZA(World Association of Zoos and Aquariums), and a multiple winner of TripAdvisor's Certificate of Excellence, Cango Wildlife Ranch remains a unique world-class facility which strives to provide conservation through education by means of various conservation projects, initiatives and informative guided tours! A significant percentage of all proceeds go straight back into our conservation initiatives providing you with ethical and unforgettable fun and memories. For unlimited adventure for the whole family – visit Cango Wildlife Ranch!

We hadn't really planned to visit the Cango Wildlife Ranch. Our main priority had been to visit Cango Caves, but we arrived in Oudtshoorn earlier than expected so decided to see what it was like.
We are very gald we did because we had a great time there. It wasn't too busy and the staff were pleasant and willing to tell us all about the animals.
There is a guided tour, but we declined this as we preferred to walk around at our own pace. There were a lot of wildlife students there and the ranchers were explaining a lot tho them especially about the crocodiles, they didn't mind us listening in.
There is a huge variety of animals to see and all appeared well cared for. We experienced bird feeding from our hands and enjoyed loads of close up interaction. We felt safe the whole time and all the animals seemed content.
In addition to paying for the entry we also paid for the cheetah experience that allowed us to enter the cheetah enclosure for a close up experience where we could pet the cheetah and get loads of photographs.
I would say this experience is as good as or better than the Cango Caves and is definitely worth visiting if you are in the area. 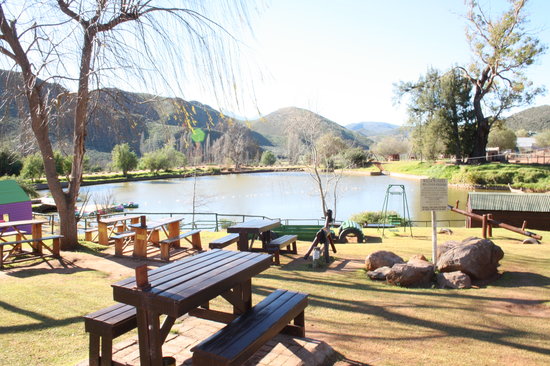 Wilgewandel holiday farm is open daily, Great Family fun! Water slides and Camel rides and lots of activities for young and old A fully a-la-carte restaurant and accommodation. 2 km from the Cango Caves

Reviewed By Andreas A - Astorp, Sweden

Free admission and modestly priced attractions. The quads are in no way worth the price though, really slow and badly damaged, on a tiny course. Camel tours are a great experience if you haven't tried it before, but a bit pricey compared to the rest of the farm. 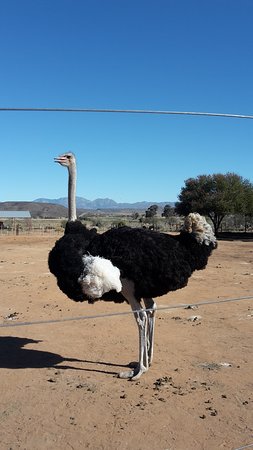 Safari Ostrich Farm, established in 1956, welcomes you to the ostrich capitol of the world - Oudtshoorn. On arrival, you will meet one of our professional guides, who will take you on an unforgettable tour, where you will learn more about these remarkable birds and their fascinating nature. The guided tour includes a fun ride on one of our tractors through a huge ostrich breeding camp with 18 adult breeding birds around you - a truly unique experience in itself. Safari Ostrich Show Farm is the first show farm in South Africa where the Kenyan Red and Zimbabwe Blue Ostriches as well as the local South African breed can be viewed.

We had a tour on a tractor at the ostrich farm, where we drove among the ostriches and the guide gave us useful information about the farm and birds.
Then we continued the tour by foot and saw the various species of ostriches and few emus.
Later we saw the other parts of the farm where they grow other animals and not only ostriches.
We completed the tour at the restaurant where we had a chance to taste the meat of the ostriches, was great! It wasn't an easy experience to eat ostriches just after seeing so many of them alive, but isn't that why the grow them? 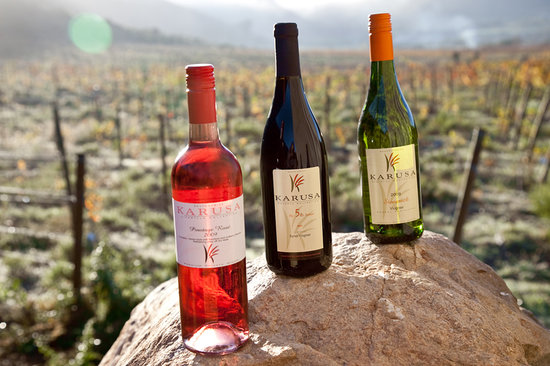 Karusa is a family operated and managed wine and fruit farm.The word “Karusa” is a Khoi San word meaning: Land with little water, a scarce resource in the semi arid plateau of the Klein Karoo.Karusa is situated at the foothill of the majestic Swartberg in the tranquil and scenic Cango Valley settlement of Schoemanshoek. The farm is en route to the world famous Cango Caves. It is situated 12km north of Oudtshoorn which is also the capital of the Klein Karoo region, and ostrich capital of the world.Karusa is the first and only Premium Private winery in Oudtshoorn.Directions to Karusa: Follow the R328 north (The Cango Route) from Oudtshoorn for 12km to Schoemanshoek. Turn left into Schoemanshoek and drive left around the back of the Church, the entrance to Karusa is ~200m on your right.

Karusa winery is just a few minutes from Buffelsdrift Game Lodge.
This visit was chosen as one of the daytime activities from our package at Buffelsdrift.
The wine tasting is great value.
5 glasses of white, red, or a mixed range with tasting notes.
Karusa offer a large lunchtime menu to accompany the wines.
Recommend the ostrich wrap.
Wines and craft beers can be purchased from the shop. 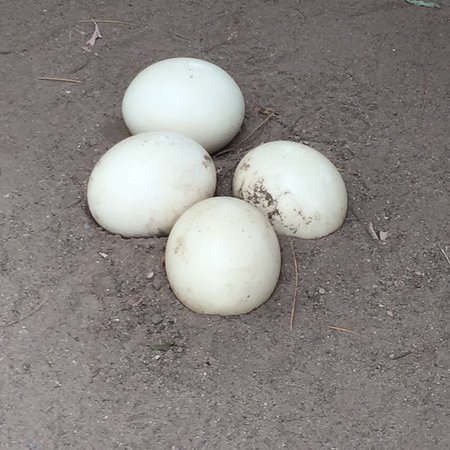 The Cango Ostrich Show Farm offers the ultimate ostrich experience with exciting and informative guided tours (daily from 9h00 to 17h00), a fantastic curio shop, a fine selection of award winning local wines; and a coffee shop / restaurant serving a lovely variety of light meals. We host groups and schools, whose itinerary often includes delicious pre-booked meals. Situated 14km outside of Oudtshoorn on the road to the Cango Caves.

This is a great tour! Knowledgeable & friendly guides, laid-back approach, fun experiences like feeding the ostriches, seeing babies in the incubator and standing on the ostrichs’ super-strong eggs - all great photo ops. This is a clean, professionally run facility and the animals are clearly well-treated. A+++ (Note: There is NO ostrich riding offered at this farm any more, about which other reviewers complained.) 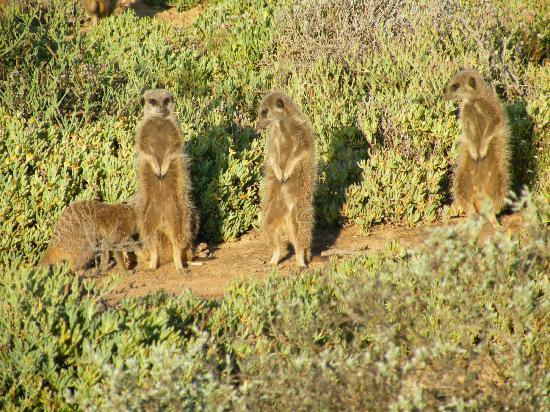 Early rise to leave by 05:45. Hot coffee on hand to warm us up. Very knowledgeable guides add to the experience. The sight of that first little head popping out of the burrow is priceless. What an awesome,personal experience. Always take something warm to wear. 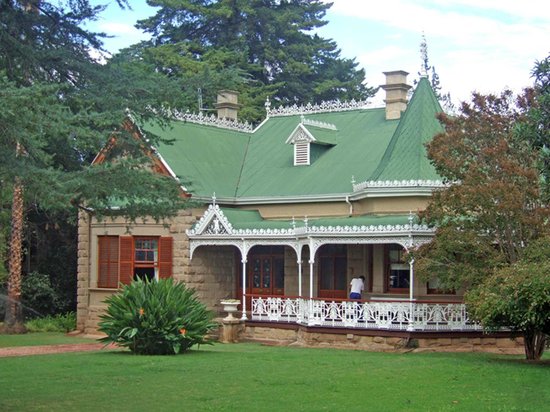 A Synagogue and other Jewish attractions are inside this quaint museum located across from the Tourist Information Bureau.

If you like local history you will like this place. R25 each admission. One room is all about the Ostrich capital of the world, with costumes, hats etc to see. Also the old pharmacy is fascinating. My husband loved the old cars owned by the local doctors in the early1900’s. Plus lots of other things to see. Allow 1-2 hours.