What to do and see in Danvers, United States: The Best Places and Tips

Danvers is a town (and census-designated place) in Essex County, Massachusetts, United States, located on the Danvers River near the northeastern coast of Massachusetts. Originally known as Salem Village, the town is most widely known for its association with the 1692 Salem witch trials. It is also known for the Danvers State Hospital (one of the state's 19th-century psychiatric hospitals, which was located here) and for Liberty Tree Mall. As of 2014, the town's population was approximately 27,000.
Restaurants in Danvers 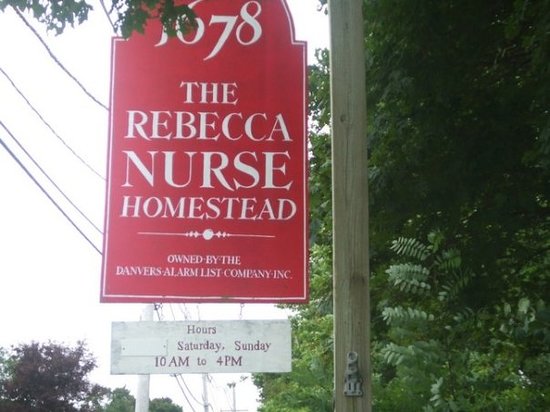 The Rebecca Nurse Homestead sits on 25+ acres of an original 300 acres occupied by Rebecca Nurse and her family from 1678 until 1798. This is the only home of a person executed during the Salem Village Witchcraft Hysteria of 1692 open to the public. Another unique feature is a reproduction of the 1672 Salem Village Meeting House where many of the early hearings surrounding the Salem Witchcraft Hysteria took place. Located on the grounds is the Nurse Family Cemetery. It has been a longstanding family tradition that Rebecca's son and husband retrieved her body after her execution and secretly buried it here. A monument with a poem by John Greenleaf Whittier was erected years later to commemorate this. Recently another victim of the Hysteria, George Jacobs, was buried here after being found in the middle of the last century on his former property in a lone unmarked grave. This is the only known burial site of anyone convicted of witchcraft during the Salem trials. Open seasonally May-November Saturday & Sunday 10-3 July & August extended summer hours Wednesday-Sunday 10-3 October extended hours Friday-Sunday 10-3 The Rebecca Nurse Homestead is a private non-profit museum owned by the Danvers Alarm List Coy. It is an entirely volunteer group of 18th century living history reeanactors that portray the militia, minute and alarm companies of Danvers and surrounding communities. The Alarm List Coy. Presents its impression to the public through demonstrations, exhibitions, parades, living history encampments and battle reenactments.

This was a nice stop for Danvers history. I personally was hoping to hear/learn more about Rebecca Nurse and her family, instead got a blanket review of the witch hysteria. The tour guide Candace was knowledgeable but wanted more of Rebecca. We did like the family cemetery on the property where John Proctor and George Jacobs (hanged accused witches) are laid to rest. Weren't told they were buried there on the tour it was a pleasant surprise we stumbled upon. 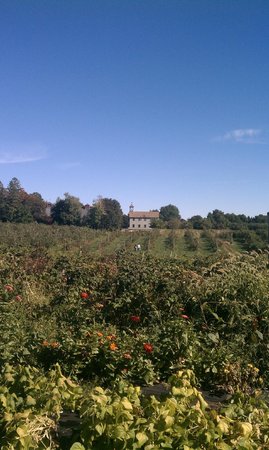 Reviewed By Francesca B - Peabody, Massachusetts

The high-season is late summer and autumn, yet visiting anytime is wonderful. There are various animals to see, picnic tables to sit at and a fun country store. Such a pleasant outing! 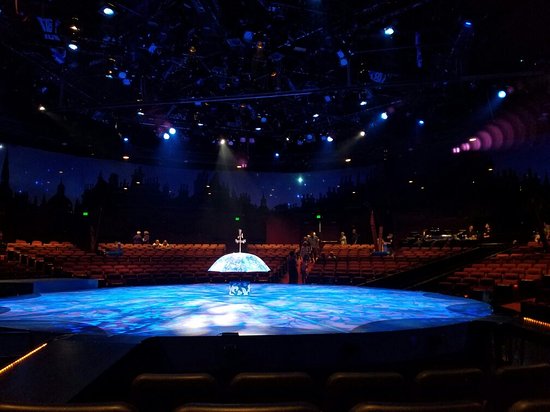 Saw Evita here recently and wonder why the ticket prices are so high. $67 -$80 each for Beverly is silly and folks seem to think the same as there were many empty seats. The actors were good but not great. Evita herself seemed angry and lacked the essence of the character. The young woman who sang "Another Suitcase in Another Hall...where am I going to" stole the show and should have been Evita. The choreography for this show was just plain strange. And we didn't notice anyone of color in the cast -- very sad. The stage floor kept going up and down to change sets, leaving a gaping hole in the center when it did. Quite a distraction.

The owner encouraged you to donate to a booth in the lobby that sends people with cancer to see a show there. What a disgrace -- when there were so many empty seats. They could have easily filled the empty seats that night! We couldn't believe it when the owner mentioned Paul Anka was coming there and how much he was paying him. Lacked class. Will not be returning. Better experiences for a quarter of the price at local venues or through ArtsBoston or Goldstar elsewhere. 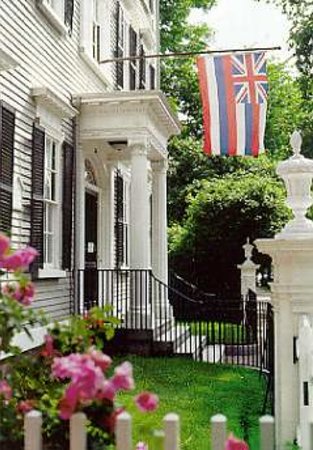 Phillips House is the only home on historic Chestnut Street open to the public, and it provides a glimpse into the private world of the Phillips family during the early decades of the twentieth century. The kitchen, pantry, and a domestic staff bedroom, present a rarely seen picture of how the great houses functioned as new technologies were being introduced.

Our guide, Joan, was extremely passionate about the House and the families that lived there. We had a tour of two....just my bride and I. It was great...we asked many questions and Joan was so willing to respond....great artifacts....provides outstanding insights as to how the affluent lived in those days...if you like history and nistalgia....you should enjoy this site. Endicott Park has acres and acres to discover. Animals on the property and fields to play games in. A large children's park and a dog park that just opened.
The townies can rent spaces for a garden, or go on the trails that meander through the property. The barn is a multi use property .... A minimal donation is asked at the entrance. 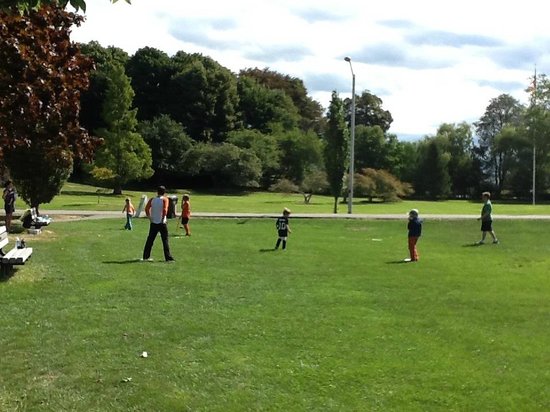 This is a wonderful park. Clean and beautiful and very spacious. The views are outstanding! This park was within walking distance from our Airbnb for the weekend. It's a lovely spot to watch the sunrise and sunset :) 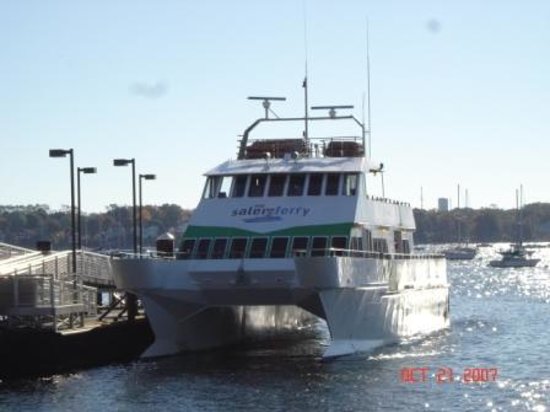 Sure -- you can take the boring train or bus (or, heavens, even drive) to Salem from Boston. But, isn't a nice water trip enticing. The catamaran leaves from the Long Wharf in Boston and drops you at the Salem Ferry terminal, about a 15 minutes walk from downtown (with signs to see on you way there). The catamaran is pleasant, with plenty of seats and tables indoors and outdoors, on two decks. There is a snack bar (with free ginger candies if the rolling seas get to you) and less than an hour after leaving you're in Salem. A nice bonus is a tourist narration of the sights in and history of Boston Harbor at the Boston end of the trip, and a similar narration about the area from Marblehead to Salem at the Salem end of the trip. The middle of the trip does take you on what can be somewhat rough waters (the remains of hurricane Maria were churning the seas when I went on the trip). But even though I am not a strong fan of water based transportation, I found it pleasant. 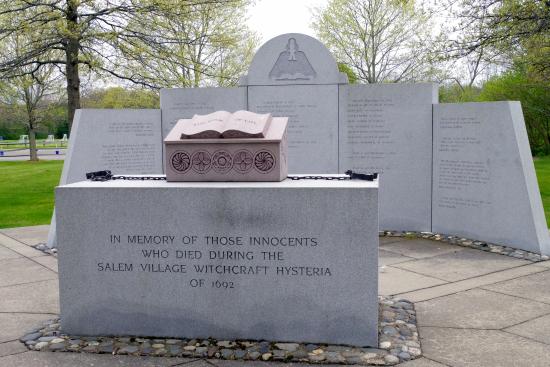 This isn't my normal choice on a vacation, but the history and education make this a must do stop in Danvers. Good activity for all ages. We've visited Monster Mini Golf twice. The first time, the place was not crowded and we found it interesting. The last time, earlier this month, it was very crowded and they did not control entrance onto the course so you felt VERY rushed. They had no score cards or pencils and no change when we paid cash. The "monsters" weren't working. The first time we did not use the arcade games but this time we did. I suggest you pay attention to the tickets you receive as the number given was very erratic. I was playing with a niece and while my scores were consistently double hers, she ended up with more tickets than I did. At the end of some of the games, no tickets were given. The "Deal or No Deal" jammed and no one knew how to fix the game so no tickets were given. After speaking to a representative, they did give us a busness card with the number of tickets on it and a bonus. Still, we left with the feeling that we had not received a fair allotment. The staff was not involved.and seemed frazzled. 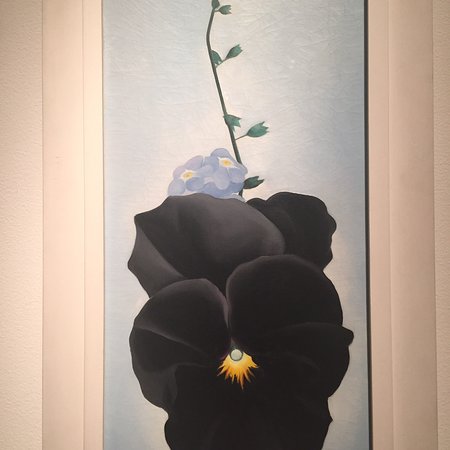 Experience art and culture from New England and around the world at one of the region’s largest art museums. Explore the museum’s vast collections and changing exhibitions, ranging from modern art to photography to Asian art and culture. The museum campus features numerous parks, period gardens, and 24 historic properties, including Yin Yu Tang, the only example of Chinese vernacular architecture on display in the United States.

Even though I went specifically for the Georgia O'Keefe exhibit, I did see the other exhibits that were there. I did not pay the extra $6 for the China house. Really...after paying $20 to get into the museum, I kind of felt like that should be included! But on the plus side, you could watch a video on the Yin Yu Tang: A Chinese House and it explains the history behind it and how they dismantled it to bring it over here. The Visitor Map they handed out at the beginning I did not find to be user friendly. I found it very hard to read. So I did just wonder around and discovered the American Art room which had a Norman Rockwell hidden in a corner! The T.C Cannon exhibit is not to be missed, and the American Art and the Japanese Art were also good!