What to do and see in Ciudad Real, Spain: The Best Places and Tips

Ciudad Real (Spanish pronunciation: [θjuˈðað reˈal]; English: Royal City) is a city in Castile–La Mancha, Spain, with a population of c. 75,000. It is the capital of the province of Ciudad Real. It has a stop on the AVE high-speed rail line and has begun to grow as a long-distance commuter suburb of Madrid, which is located 115 miles (185 km) to the north of Ciudad Real.
Restaurants in Ciudad Real 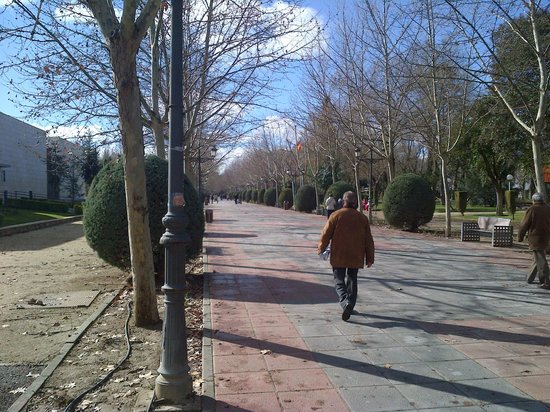 The Gassett Park is located at Parque Gassett. Jose Ortega y Gassett was a famous Spanish philosopher and author, who lived between 1883 and 1955. This beautiful park is named after him. This is a big park that has a long walkway that is shaded with trees. The park has thousands of rose bushes and there are Fountains and arbors where people can rest. It is a favorite place for mothers to bring their children. There is a monument called La Cruz de los Casados, which has a cross on top of a Corinthian column, built in 1929. It reminds people of the legend of the tragic love between Don Sancho and Doña Blanca, as written in Don Quixote. 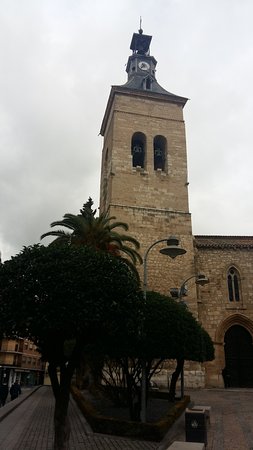 San Pedro Church is located at Calle General Rey, 1. It is a Gothic church built in the second half of the 14th century. It resembles a fort. In the main facade is the beautiful doorway called the Perdon and there is a great rose window. There are three naves in the church, with the central nave being higher and wider than the lateral naves. The most important chapel has the sepulcher of Fernando de Coca, who was the confessor and chaplain of the Catholic Kings, as well as the canon of the Cathedral of Siguenza. It also has the altarpiece of the Virgen de Loreto, done in alabaster from the 15th century. Another chapel is the Capilla de Jesus Nazareno, which has an Isabeline architecture and also grating. The church is also famous for the 18th century reredos made from tile from Talavera de la Reina. There is a tower that is crowned with a pyramid type of structure. The vault has the shape of a star and the choir chairs are from the 16th century. This church has been declared a National Monument. 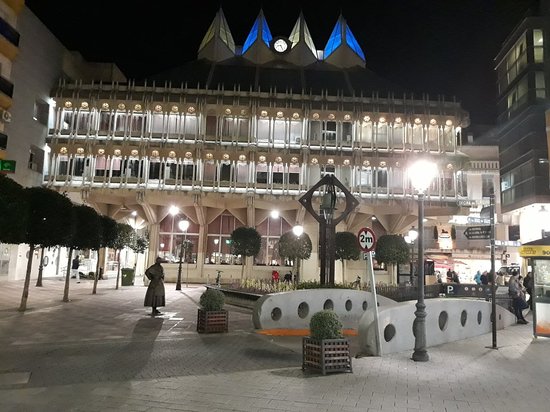 Reviewed By Mike B - Benirrama, Spain

A central town square, over looked by the very quirky town hall and surrounded by bars and restaurants interspaced with clothes and shoe shops. 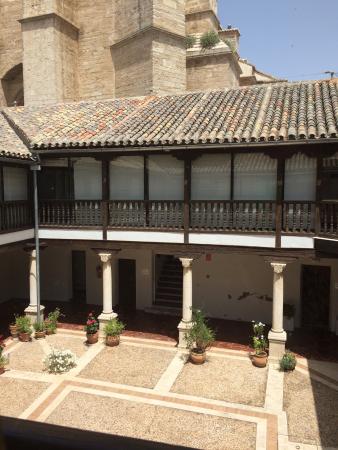 The Museo Manuel Lopez Villaseñor is located at Calle Reyes, 11, close to the Cathedral and occupies the oldest house of the city, built in the 15th century. It belonged to a military man by the name of Hernan Perez de Pulgar, who participated in the siege of Granada in 1492. Later the building was restored and turned into a museum to honor Manuel Lopez Villaseñor, who was the most famous painter and muralist of the city, and who donated his works of art to the city. The patio is very beautiful and has balconies and flower pots that are typical of La Mancha. 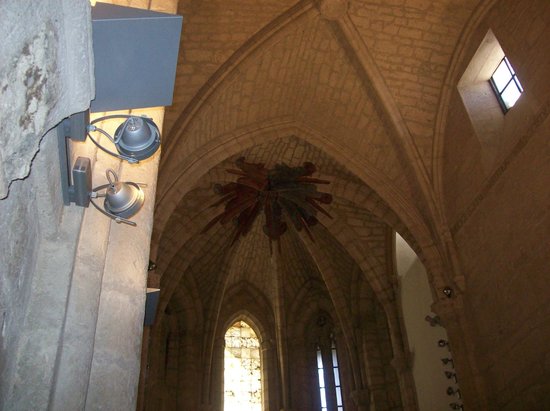 The Church of Santiago is located at the Plazuela de Santiago. It was constructed at the end of the 13th century in the old Jewish quarter and is the oldest church in the city. The style is Castilian Gothic from the 14th century, showing the transition from the Romanesque to the Gothic. The outside of the church is very sober. The central arch is painted with the apocalyptic figure of a dragon with seven heads, which apparently was an amulet against evil spirits. The ceiling is decorated with stones forming eight pointed stars. There are two chapels, one dedicated to the Cristo de la Caridad and the other to the Virgen de los Dolores. There are mural paintings in the chapels, vaults and the central arch. There are coats of arms of the family of Don Pedro Muñiz de Godoy, the Master of Calatrava around 1370, the Coello family of Portugal, and the Order of Calatrava. The Cathedral of Santa Maria del Prado is located at Calle de la Azucena. It has the Gothic style and has been restored several times in the past using different architectural styles. There is a doorway called the Perdon doorway, which was the main entrance during the time of Alfonso X, and this is Gothic with Romanesque elements. There is a rose window that was built in the 13th century. The southern door is decorated with three coats of arms, which represent the three military orders that influenced the city. The church has only one nave, but it is the second biggest nave in Spain. The main altarpiece is huge and was built by Giraldo de Merlo in 1617. At the base of the altarpiece is the choir that was finished in 1960. To the left of the nave is the Capilla (chapel) del Santisimo, and in front of this is the Capilla Penitencial. Below the high choir is the Capilla de la Virgen de los Dolores, with a Baroque altarpiece from the 16th century. The new tower was finished in the 19th century and has four sections done in stone. 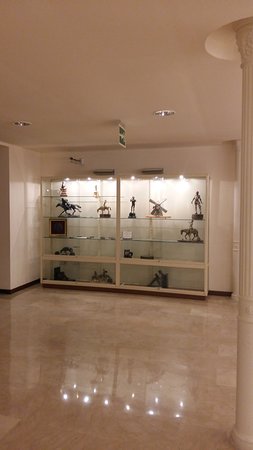 The Quixote Museum is located at Ronda de Alarcos, 1, at the end of the Gassett Park. There is a beautiful sculpture of Don Quixote and Sancho Panza in front of the museum. The museum has ten paintings by the Jose Jimenez Aranda, who was the best illustrator of Don Quixote from the 19th century. There are also illustrations done by Felipe Garcia Coronado. The exhibits are audio-visual in nature, with statues talking like their characters in the book. There is also a short narration from the book. The first floor contains an impressive library of 3,500 books that is dedicated to Cervantes. 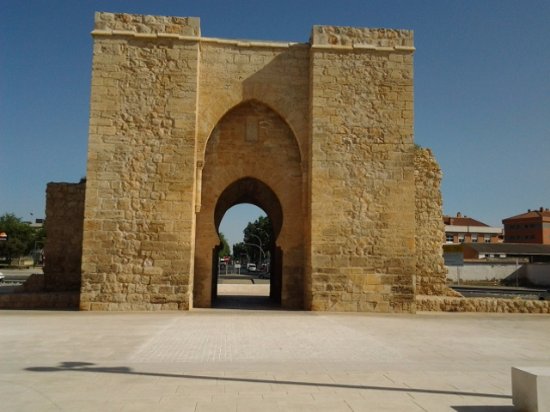 The history of Ciudad Real is very interesting and this remaining entrance through what was a wall around the entire city is quite fascinating. There is a bit of signage but only in Spanish so its at best a five minute stop and a quick picture. 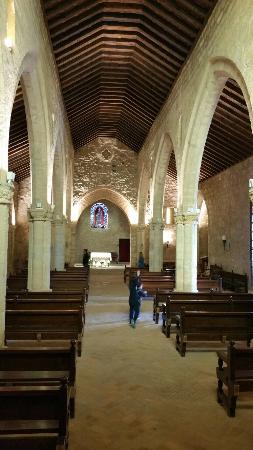 The Palacio de la Diputacion Provincial is located at Calle de Toledo, 17. It is the most beautiful civil building in the city of Ciudad Real. The architect of this building was Santiago Rebollar and it was constructed in 1892. The facade has towers at the corners and the front of the facade has Ionic columns that are topped by a pediment. The lower part of the building was constructed with white stone, while the upper part has white stone and red brick. The principal staircase to the upper floor is very impressive and it has frescos done by Angel Andrade and Samuel Luna. The salon where the officials meet has very good portraits. The patios of the palace are beautiful and also have a permanent exhibit of the paintings of Angel Andrade and Carlos Vazquez, two famous painters of the city from the early 20th century.