What to do and see in Andernach, Germany: The Best Places and Tips

Andernach (German pronunciation: [ˈandɐˌnax]) is a town in the district of Mayen-Koblenz, in Rhineland-Palatinate, Germany, of currently about 30,000 inhabitants. It is situated towards the end of the Neuwied basin on the left bank of the Rhine between the former tiny fishing village of Fornich in the north and the mouth of the small river Nette in the southeast, just 13 miles (21 km) north of Koblenz, with its five external town districts: Kell, Miesenheim, Eich, Namedy, and Bad Tönisstein. A few hundred metres downstream of Andernach the Rhine valley narrows from both sides forming the northern part of the romantic Middle Rhine stretch. Already in Roman times the place the narrow passage begins was named "Porta Antunnacensis" or Andernachian Gate. It is formed by two hills, the Krahnenberg  (engl. Crane hill)  and the Engwetter (Narrow weather) on the right bank near the wine village Leutesdorf (external town district of Bad Hönningen). The crane hill is named after the old crane beneath his foot (see below); in earlier times (until 1650) the hill was named "Geiersberg" ("Vulture's hill").
Restaurants in Andernach 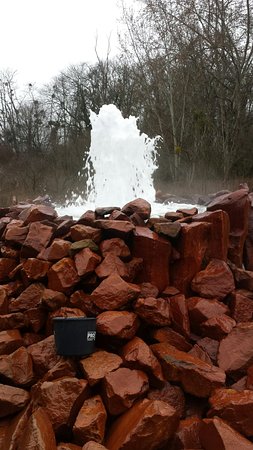 Reviewed By Nick B - Maynooth, Ireland

This is another must see in Iceland it's a easy walk in from the car park & The geyser when it blows is quite a sight .Dear Nick, dear Caroline, Thank you for your assessment. But there is a little mistake. We´re in the middle of Germany, next to the river Rhine. So please visit us too and enjoy our cold-water geyser in Andernach. :-) l 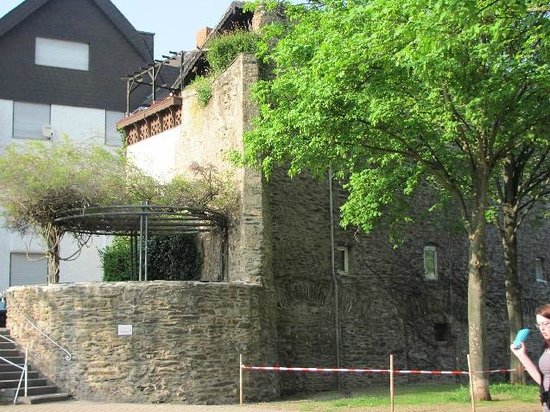 Unfortunately it was raining when we visited Andernach. That did not stop us from walking the town viewing it's historical city wall and surrounds.
Would have loved to have spent at least a whole day in Andernach taking in the beautiful town but our river cruise left all to soon. 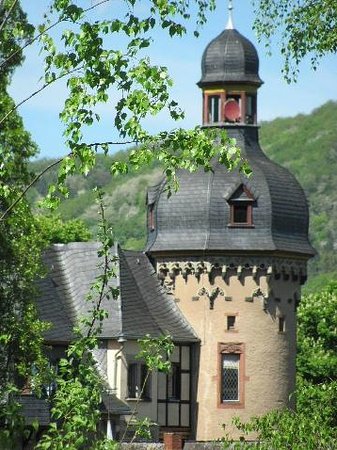 The Namedy Castle is a wonderful place to enjoy Music and have distinguished parties. Princess Heide von Hohenzollern attracts wonderful theatre and music events to the castle and people from all over the region love to come and enjoy outstanding Performances and events. Particulary the "Andernacher Musiktage" have earned wide recognition. It is possible to rent the Castles public rooms and Gardens for weddings and major events. 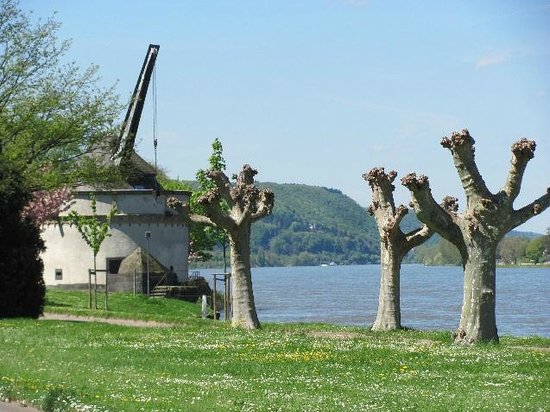 For 350 years it loaded the coveted millstones and other volcanic rocks on the Rhine ships. One of the many commercial products is the volcano lava, also called the "Eifel gold", which is in Andernach extracted and shipped since more than 2500 years. 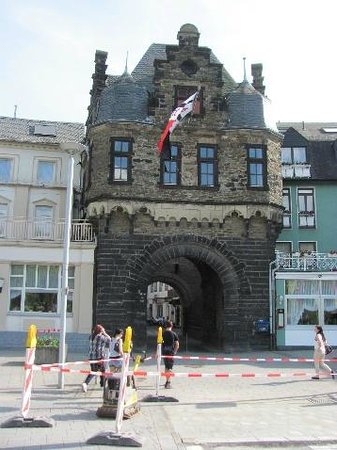 The Rhine port is the main entrance to the city from the Rhine side, it is one of the oldest dual port-sites on the Rhine and is one of the most important sites of the joint city reinforcements. The city side part was built around 1200. The two more than life-size Roman martial figures made from Tuff "guarding" the courtyard are vernacularly called "Andernacher Bäckerjungen" (according a 19th century legend). 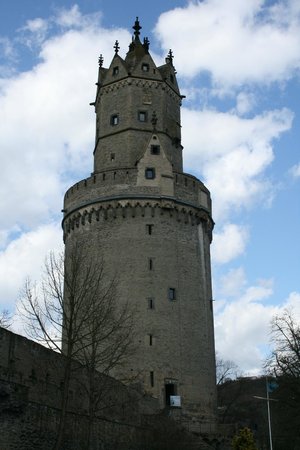 Entrance to the tower costs only 50 cent and after climbing 100 steps offers a great Panorama over the city and the Rhine, as well as an interesting small museum about the tower. There also is a small museum in the upper former “Jugendherberge” but this is closed during weekends. Is the landmark of the city as this tower can be seen from every direction. It is one of the largest medieval towers in Germany: total height 56 meters, 1440-1453 built partly on Roman foundations and is fully preserved: during the Palatine succession war it even withstood in 1689 an inflatable attempt by the French soldiers of Sun King Louis XIV, a witness of this is a hole on the west side of the tower. 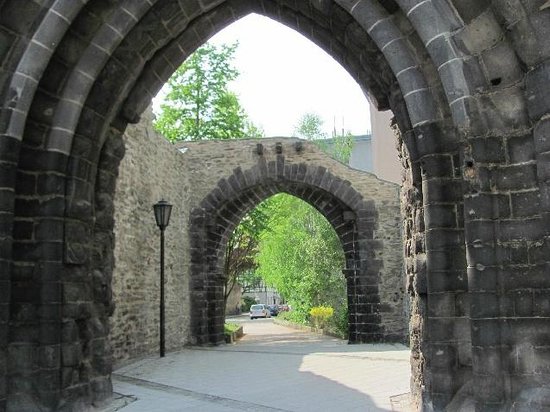 The "port of Koblenz", also "Burgpforte" (Castle gate), was built around 1200 with the aim to protect the Castle and was at that time the main entrance to the city, this port and Castle were destroyed by the French during the Palatine succession in 1689. Next to this Koblenz gate is the 12th century castle ruin of the Cologne archbishops located. 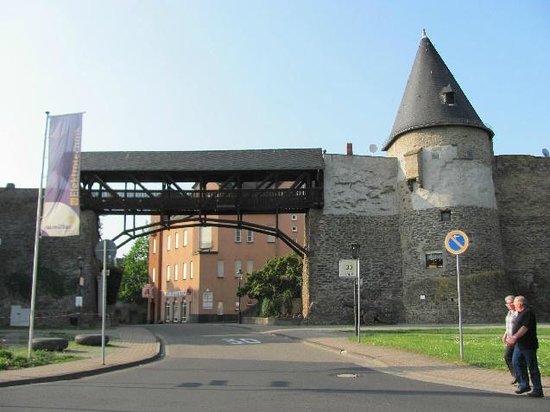 Part of the medieval city fortifications. Renovated in 1994, in the vicinity of the Tower is a wooden structure located which mimics an accurate wallwalk and overspans the passage to the market. Embedded in the wall an antique Roman graveslab from Firmus (50 AD) and a cannon dating from 1988.