What to do and see in Abruzzo, Italy: The Best Places and Tips

Abruzzo (pronounced [aˈbruttso]) is a region of Central Italy, with an area of 10,763 square km (4,156 sq mi) and a population of 1.2 million. Its western border lies 80 km (50 mi) east of Rome. The region is divided into the four provinces of L'Aquila, Teramo, Pescara, and Chieti. Abruzzo borders the region of Marche to the north, Lazio to the west and south-west, Molise to the south-east, and the Adriatic Sea to the east. Geographically, Abruzzo is divided into a mountainous area to the west, which includes the Gran Sasso D'italia, and a coastal area to the east with beaches on the Adriatic sea. Abruzzo is partially considered culturally, linguistically, historically, and economically a region of Southern Italy, although geographically it may also be considered central. The Italian Statistical Authority (ISTAT) deems it to be part of Southern Italy, partially because of Abruzzo's historic association with the Kingdom of the Two Sicilies. Arguably one of the finest Cathedrals in the entire world, St. Peter's is the spiritual center of the Vatican and the product of many of Italy's great Renaissance's architects, among them Bramante, Raphael and Michelangelo.

Join a tour to avoid ridiculous queues and hours of waiting and get to hear and appreciate the history. The basilica is extraordinary and in some ways grotesque in the grandeur. 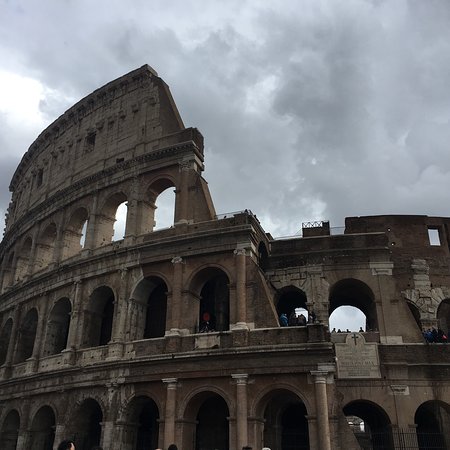 Perhaps the best-preserved of the monuments of ancient Rome, this huge marble structure was built to hold more than 50,000 spectators to witness bloody contests of might and the slaughter of wild beasts.

We were lucky enough to be staying in a hotel that was a 5 mins walk from the Colosseum.. because of this we never bothered to prebook tickets or pay for skip-the-line. We walked down to the ticket office at 8am, had a little wonder around and took some photos and then joined the ticket office queue around 8.20. There were probably 50 people in front of us at this time and by 8.30 (the Colosseum opening time) a further 70-80 people now queuing behind us so I would recommend getting there for 8am to avoid the long wait.
The queue for security check moved pretty quickly and we were inside in no time!
This was our second visit, the first being on a guided tour so we had a leisurely walk around this time.
The Colosseum is wonderful, the hoards of tourists can be annoying but you have to expect this. The girls in the ticket office were very friendly and provided any information needed. The staff inside at security were a little more stern but given their job and the hundreds of often rude tourists pushing their way through id be stern too!
The book shop inside is small but reasonably priced. I paid 5e for a Colosseum guide book, 10e for a Forum book and 12.90e for a book on the archaeological sites of Rome. The staff inside were friendly and worked down the queue at the tills fast.
The Colosseum is magnificent. Go and enjoy. Pre book if you cant get there early but if you are able to then arrive for 8am and this should help you avoid the long wait for tickets.

Founded by Gilberto Stanzioni in 1995, is a company of licensed professional chauffeurs operating in Rome & all over Italy. Our priority is to provide you with the highest quality of private tours, shore excursions and limousine service, ensuring that you always have a lasting memory of your special days in Italy.

We would like to thank Giliberto Stanzioni for perfectly organising our private shore excursion from Civitavecchia to visit Civita di Bagnoreggio and Orvieto. He is very polite , punctual and knowledgable and his car was spacious, clean and fully air-conditioned. Tour was very well organised so well worth money we spent . Definitely recommend Discovery Touring & Limousie service for anyone having Civitavecchia as a port of call or whilst visiting Rome. Thank you Gilberto...... alla prossima.

This is where Saint Benedict lived for three years as a hermit in a small cave before he founded monasteries. People visit this place to visit his cave (called the "sacro speco") as well as the monastery itself. It has some mosaics and frescoes dating back to 13th century, an "Old Chapter Room", an "upper" and a "lower" church, a chapel carved out of a cave, a monastery, a rose garden, etc. You'll also find here the oldest picture of St. Francis painted when the Saint was still alive.
A visit to this place is both interesting and edifying. It gives you a glimpse into the beginning of monasticism in Europe, the simplicity of hermit lifestyle, etc. It is one place pilgrims should visit at least once in their lifetime. Highly recommended! 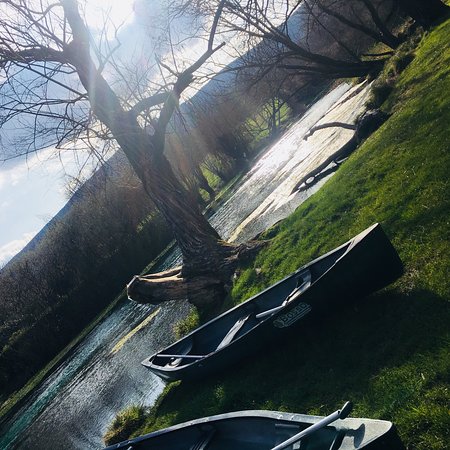 Il Bosso Soc Coop is a modern company operating in the responsible tourism field since 1999. It run several activities to be carried out into a wild and naturalistic scenery such as canoeing, trekking, nordic walking, mountain biking, thanks to these activities is possible to discover one of the best place in Abruzzo: the distric of the Tirino Valley into the Gran Sasso National Park.

A group of six of us went out on the canoes. Each canoe has a guide and they all spoke great English. Our guide Erika was able to answer all our questions and gave us so much information as we went along. The views are spectacular and everything felt very safe. At the half-way point you were able to swim in the river and try wild celery before the guide rowed you back so you could enjoy the scenery. I would really recommend this. 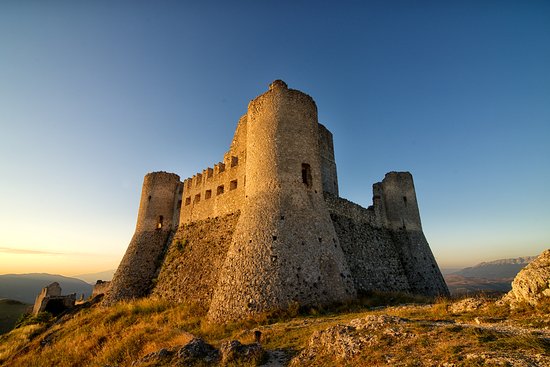 Reviewed By alex4777 - Purmerend, The Netherlands

This is a fantastic place to be. We visited around 14:00pm in summer. Very hot but at this altitude(1400m) the wind is refreshing cool. The place is absolutely fabulous to be, the old ruins in the mountain scenere. Even if the light (high sun) was not fantastic, the place makes it all good.
Tip: you can drive to aprox 10min walk from the scene. Park at the end of the road and follow the path. With walking shoes it's more fun to stroll around. On sandals keep the path first leading to the church di Santa Maria della Piete and than climb slowly up to the castle. (Same way back). 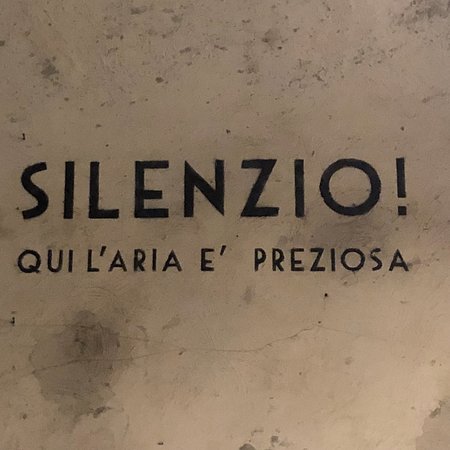 I've known about this place for a long time, but I never visited it. The work made in few years by the association of volunteers managing this bunker is simply amazing. The history of this bunker has been brought to light in less than five years, and through research carried on internationally and with so much passion that you can't help supporting what's happening there.
Although being led by a staff not involved in military studies, the visit offers a powerful insight of both bunker's technology and the history of people living and working there. Moreover, it moves inside the very chronicle of the World War II, as well as the Cold War. Indeed, the military authority managing this bunker has been Italian, but also German and American: the headquarter of the German contingent in Rome (led by Kesselring) was there, but following the end of the war NATO intervened, transforming it in the shield for the head of State, in case of a nuclear attack on Rome.
Bunker Soratte definitely worth a visit, but there is much more to enjoy. Indeed, it's set in the beautiful environment of the mount Soratte - leaving the bunker you'll find yourself in front of a considerable panoramic viewpoint.
Tips: the "Roma Nord" Railways reach the station near Sant'Oreste, a small town near the mount. Nevertheless, the best way to arrive there is by car.

Dedicated to the seven planetary divinities and featuring an interior of gorgeous marble, the Pantheon is one of the most impressive monuments of Augustan Rome.

Pantheon falls under the category of must see in Rome. The architecture is superb and the the dome inside the temple must be one of the most photographed items. The arts displayed here are exquisite and elaborate and this attraction can be very crowded since the entrance fee is free. It is such a beautiful building structure to behold. 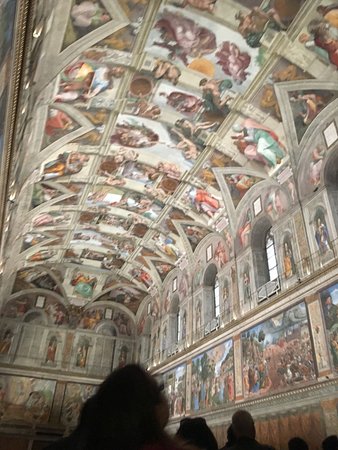 Probably the most famous chapel in the world because of its incredible artwork, notably "The Last Judgment," Michelangelo's stunning fresco covering 10,000 square feet of the ceiling and wall.

Reviewed By Grant I

Beautiful ceiling and awesome paintings. You are constantly pushing next to people while the Vatican security guards are yelling silence and stand up. It is funny to see all the f-yous that Michelangelo put into his works, towards people that made him mad. 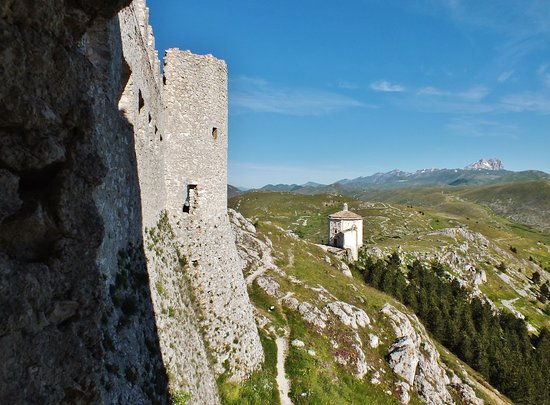 Reviewed By alex4777 - Purmerend, The Netherlands

This is a must see and easy (half) day trip from l'aquilla. Even during daytime it's impressive to see the church and the mountain scenery on the background. Around sunrise/ sunset I assume the light is even better for photographs. We visited during midday, but it still was worth a visit. Tip: bring your walking shoes. With sandals it can be done, like me, but i regret not put on my walking boots.
Location can easily be reached by car which you can park at the end of the road for a 10min hike.