Top 6 Things to do in Medina, United States

Medina is a village in the Towns of Shelby and Ridgeway in Orleans County, New York, United States. The population was 6,065 at the 2010 census, making it the county's most populous municipality. The village was named by its surveyor, Ebenezer Mix. It is part of the Rochester Metropolitan Statistical Area.
Restaurants in Medina

Incredible would be the word that I would use to describe this museum. There are an abundance of railroad memorabilia from watches, signs scales, punches, conductor hats, photographs and of course a variety of electric train sets.

The main exhibit is a huge train layout in the center of the exhibit room which is the envy of any man or boy that ever owned a train set.

All in all, a walk through of this museum is an educational tour during a period when railroads ruled the transportation and economic center of America. 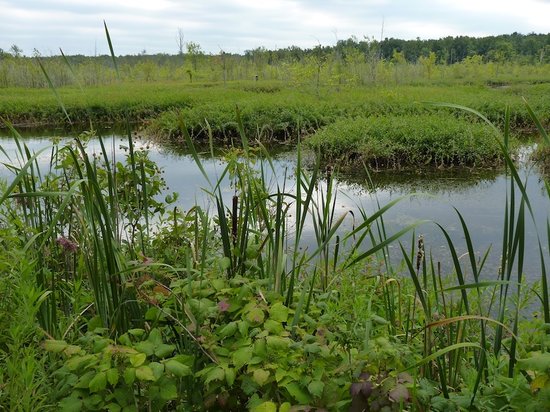 The 11,000-acre refuge is located midway between Buffalo and Rochester in western New York State.

Iroquois National Wildlife Refuge was named for the Iroquois League, the Native American union that resided in the Northeastern United States. The league was originally made up of five nations: Cayuga, Oneida, Mohawk, Seneca, and Onondaga. The Tuscarora entered the union in the 1800's.

At the end of the last glacial period, Tonawanda, a huge lake, covered much of Western New York. Over time, the lake drained. Only a few swampy areas remained. Wildlife flourished in the diverse habitat created. The area escaped local development in 1958 when the federal government established the area as a national wildlife refuge.

Iroquois National Wildlife Refuge is located mostly in the rural towns of Alabama and Shelby midway between Rochester and Buffalo. The Visitor Center is in nearby Basom.

The 10,828-acre refuge serves mainly as nesting, feeding, resting, and staging areas for migrating waterfowl. The varied habitats support over 265 species of birds, over 40 species of mammals, plus reptiles, fish, amphibians and insects. Bald eagles have maintained an active nest on the refuge since 1986.

Management at this refuge tends to the needs of species of special concern that include the peregrine falcon, osprey, black tern, black duck, and American woodcock that use the refuge during part of the year.

The place to begin one’s visit is at the Visitor Center in Basam. There are several interesting interpretative exhibits, some of which are interactive. There are some stuffed animals and birds on display.

There are separate papers outlining the rules and boundaries for sport fishing, trapping, waterfowl hunting, Turkey hunting, upland small game hunting, and deer hunting. Since hunting is allowed at certain times of the year, it's advisable to check before you go, if you plan to hike.

There are several bodies of water. The largest are Mohawk Pool, Seneca Pool, and Oneida Pool. The three are clustered together and make up most of the western portion of the refuge. The Kanyoo Trail goes through the center of this area. The western half of the refuge is more for wildlife observation, photography, and hiking.

The eastern half of the refuge is mostly land with smaller ponds, marshy areas, and creeks. This area is more conducive to fishing, photography, and wildlife observation.

During my visit, I walked around near the Visitor Center near Mohawk Pool. Then, I went to the Ringneck Marsh Overlook in the northwestern part of the eastern half of the refuge. In my stay in that area at midmorning, no wildlife chose to show itself; however, it was still a worthwhile visit as it was scenic and quiet there.

The Iroquois National Wildlife Refuge is great place to enjoy the outdoors with an easy hike, fishing, wildlife observation, and photography. It’s uncrowded so one can really enjoy the peace and quiet of this sanctuary for nature.

For its scenic beauty and serenity in the outdoors, I rate this attraction a solid 5.

I highly recommend a visit here when in the Buffalo or Rochester areas. After my visit, it was about a 35-minute drive to the Theodore Roosevelt Inaugural NHS on Delaware Avenue in Buffalo. So, it’s not very far way.

There are also some New York State wildlife management areas nearby.

If you found this review helpful, kindly click YES below.

Don't let other dissapointing meads determine your opinion of all meads come in and try out unique and flavorful creations.

I believe this is the only meadery in WNY, or one of a very few and it is part of the Niagara Wine Trail. This is a good place to visit when you are in Medina or if you are just looking to taste some mead if you have never had it before. All of the samples I had were good, but not spectacular. If you like bloody mary's, then this is the place for you! The have an amazing bloody mary made with ghost peppers so it is very hot. Be warned that it really is hot but soo delicious! They also have other cocktails on their menu if you want to try something different. 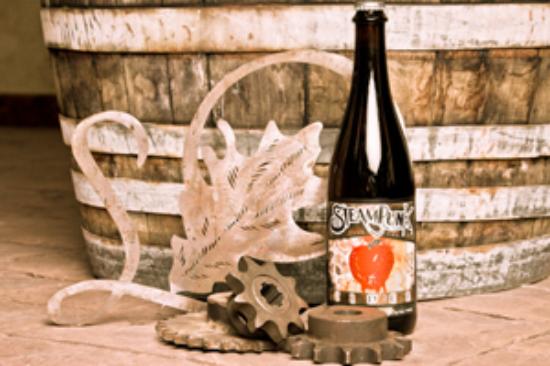 Don't let the trail map fool you...only 7 miles from Becker farms. Some of the best wines on the Niagara wine trail. Curtious and fun servers behind the bar. Very experienced wine maker too! They are open until 6 p.m. every day...don't believe the 4 o'clock closing.

Right in the middle of (or nearby) the Village of Medina (Orleans County) one can find an interesting phenomena. Old Orchard Creek flows under the Erie Canal then over Medina Falls. It is quite an unusual feeling to be walking on the towpath of a canal looking down at a waterfall. To top it off, you can drive a short ways away and drive through a tunnel under the canal (I understand it's the only road that goes under the Erie Canal). There is also a railroad museum in town and I guess there will be special Thomas the Train days there in May. We didn't stop anywhere but McDonald's on this daytrip but there appeared to be a few places to stop to eat. 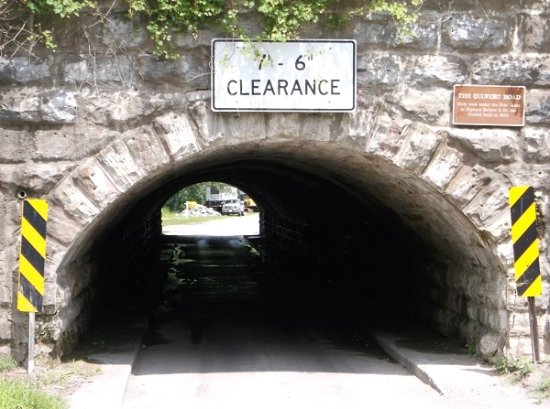 A Ripleys wonder! It was a strange sight to see, that is for sure. The road is in the midst of being nicely repaved, but that kind of ruined the ambiance of this historic culvert. Because of the roadwork, we couldn't drive through the tunnel, but we did climb the hill to see the canal. It was much narrower and shallow than we expected, at least at this section. Seeing this sight was worth the short 30 minute drive in the country, from Lockport.