Top 10 Things to do in Stranraer, United Kingdom (UK)

Stranraer (UK: /strænˈrɑːr/ stran-RAR; Scottish Gaelic: An t-Sròn Reamhar, pronounced [ən̪ˠ t̪ʰɾɔːn ɾãũ.əɾ]) is a town in Inch, Dumfries and Galloway, southwest Scotland. It lies on the shores of Loch Ryan, on the northern side of the isthmus joining the Rhins of Galloway to the mainland. Stranraer is Dumfries and Galloway's second-largest town, with a population including the surrounding area of nearly 13,000.
Restaurants in Stranraer 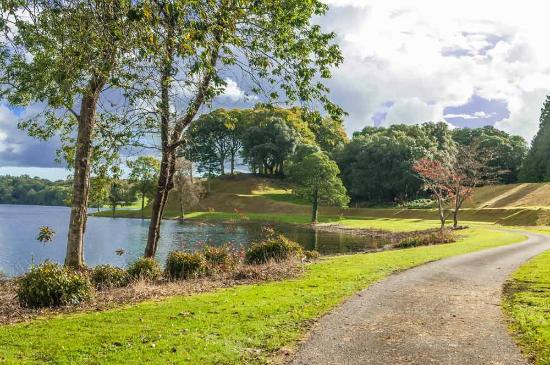 Welcome to Castle Kennedy Gardens, one of Scotland’s finest Gardens, set in 75 acres and offering something for everyone to enjoy. From stunning fauna, to beautiful scenery, sculptured landforms, magnificent walks and popular bird hides, the Gardens are a hidden treasure in South West Scotland and a perfect haven for relaxing and exploring. The Gardens and neighbouring Lochinch Castle also host civil and religious weddings and between them offer a diverse range of beautiful wedding venues for ceremonies and celebrations. We have a number of luxurious self-catering holiday cottages too for couples and families which are open for bookings throughout the year. Family home to the 14th Earl and Countess of Stair, the Gardens were the inspiration of the 2nd Earl of Stair in the 1730’s and are famous for colourful displays of Rhododendrons, Azaleas and Embothriums, many rare and exotic plants, 21 Champion Trees and a number of spectacular avenues and the romantic ruins of 16th Century Castle Kennedy. An elaborate series of terraces and land sculptures can be found throughout the Gardens forming stunning patterns of curves and banks. Despite their contemporary look and feel these were constructed in the 1730’s using men with carts and horse drawn equipment to move and mould the landscape. The stunning Avenues in the Gardens were originally planted with specimen seeds given by famous botanical explorer Joseph Hooker. Each Avenue was planted with a single type of tree, many of which can still be seen today. These include the 150 year old Monkey Puzzle Avenue, the Thuja Avenue and the Dettingen Avenue which is lined with evergreen oaks. The beautiful two acre Circular Pond filled with rare Victorian water lilies is also a highlight. Our charming Tea Room is the perfect place to enjoy a light meal of sandwiches, soup, baked potatoes, hot drinks, delicious home-baking and tasty children’s menu. Access to the Tea Room only is available without paying admission to the Gardens, making it an ideal journey break or unique location for a business or social lunch. This year we continue to enhance your visit to our Gardens with a wide range of events and activities for the whole family. These include weekly Ranger Activities which follow a monthly theme and our regular guided garden walks. And the romantic ruins of 16th Century Castle Kennedy provide a stunning backdrop to open air theatre productions. We hope you find a special event of interest to you and your family and enjoy your time in the Gardens.

This was just a wonderful day and a relaxing place to visit the views and walks are stunning had been a very wet start to our holiday so we grabbed the first dry day and headed here. Starting at the tearoom with a homemade scone what a treat these are homemade and great coffee . The tearoom is not modern our fancy but i can tell you this place can knock spots off any 5 star establishment . We enjoyed it so much that we returned for lunch the service by a the lady and young guy was excellent nothing was too much trouble and gave fab customer service. The Gardens were beautiful although the rain had never stopped for 2 days we still enjoyed the walk and the views over the loch wow .A must place to visit just so beautiful 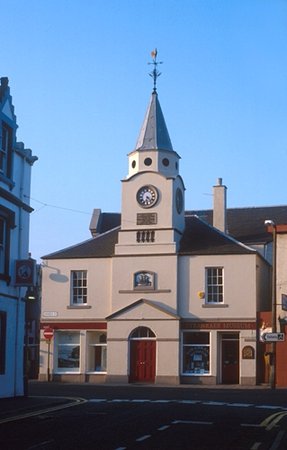 A great little museum outlining many historical aspects of life in Stranraer. Good for children also as there was a space exhibition upstairs and folk could try on various outfits. Up to date also with the recent achievements of astronaut Tim Peake. Free admission also. Donations welcome.

Situated in the centre of the town, this castle and the displays within it tell the story of the history of how the village then town was born. Pity the medieval houses didn't survive, because it would have enhanced the woe experience.
Well worth a visit. 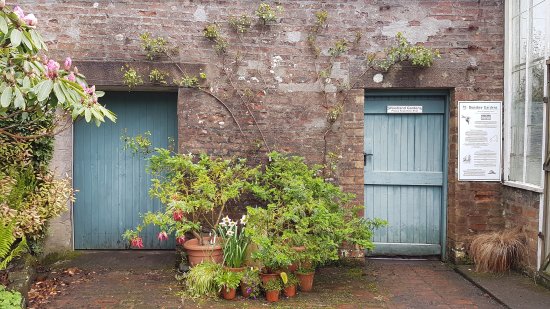 Went here on a fairly wet midsummer day. Nonetheless the Gardens were interesting, and there are extensive walks beyond the boundaries of the Gardens themselves into Portpatrick through some lovely wooded areas.
The tea rooms are very nice with a very nicely painted 360 degree mural on the interior walls.
We were staying in a property on the estate so didn't have to pay the entrance fee so I don't know how much the usual entry fee is. Stranraer iCentre is located at the edge of the town centre, a few minutes from the harbour front. We offer local information and advice for this hidden gem in the South West of Scotland. Stranraer is situated at the head of Loch Ryan on the southern tip of Scotland. There are many things to do in the area including fishing and walking. You can discover some of the most beautiful Gardens in Dumfries & Galloway. We also have great golf courses, one of which, the Creachmore, was the last course to be designed by James Braid. Nearby Cairnryan, has the shortest ferry crossing available to Northern Ireland. We offer a wide range of excellent Scottish products and services. Including: guide books and maps for the area; bookings for Stena, Citylink, National Express and Caledonian MacBrayne; accommodation bookings; souvenirs and gifts.

Lovely, chatty, helpful staff who guided us excellently and advised on some fantastic places to visit. Thank you.Thank you for your review of Stranraer iCentre. We are delighted you found our staff to be helpful and friendly as well as being able to inform and inspire you. We look forward to welcoming you back if you visit Stranraer again. 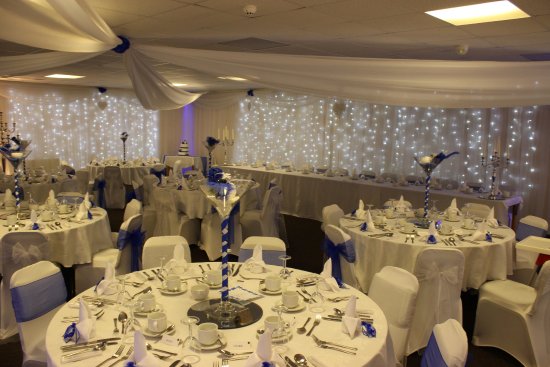 From the outside, I didn’t expect anything special as it is a sport facility and quite no nonsense and industrial looking, but once inside, wow! Hall covered in white net and fairy lights, so beautiful, with ample dance floor and lovely atmosphere. Bar prices good, and the food...the food! Gorgeous....really enjoyed it. Soup, chicken in a peppercorn sauce with veg., apple crumble and custard...all beautifully prepared and presented.
The staff were attentive and friendly, asking us if we were enjoying ourselves which I really liked as they don’t usually venture to ask, or comment, and the lady who ordered a taxi for us went above and beyond the call of duty to make sure we got it ok. Very impressed- thank you for a lovely evening and experience! drive up the single track road and park up, walk through the gate and follow the path to a glass window where there is short descriptions of the stones, the church itself is locked up and starting to fall apart, although it does have a lovely floor within it. 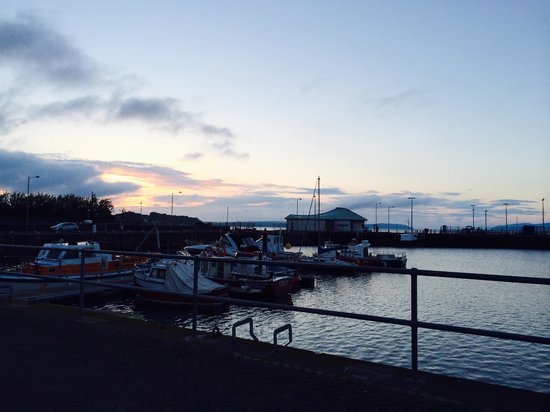 We now travel over to Scotland from Belfast to Cairn Ryan Ferryport bypassing Stranraer, which used to be the port of arrival. Ferries crossed to Larne and later to Belfast from the Port of Stranraer but to save time on the crossing this has now been shut down and is being left to crumble. Outside the ferryport there is a small harbour for pleasure boats.
The only reason to come on down the coast road to Stranraer is to visit one of the many restaurants. 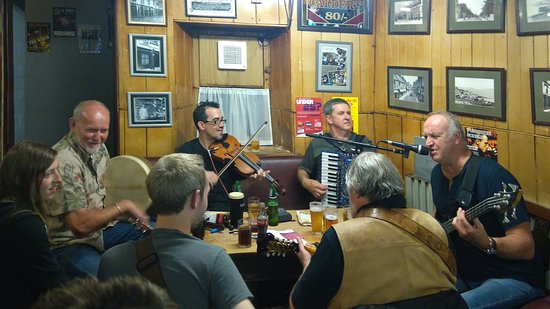 A family run pub, which serves the best real ale in the area. Always a warm welcome with friendly staff. Renowned for its excellent free traditional/folk, live music on Friday nights. It would be hard to find better, played by people who do it for the pleasure of it. Highly recommended. 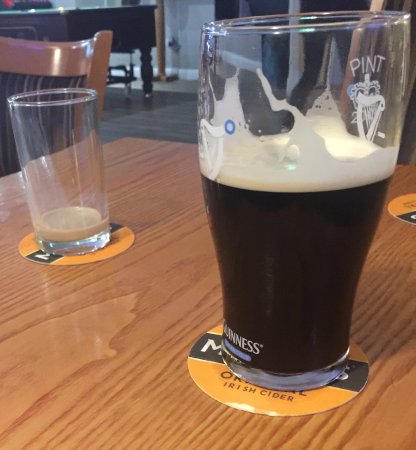 Good place to call for a drink. A good crowd in, good atmosphere and drinks at a reasonable prices. Efficient service from friendly staff. TV's for entertainment. Good bar, well worth a visit