Top 10 Things to do in Santiago del Estero, Argentina

Santiago del Estero (Spanish pronunciation: [sanˈtjaɣo ðel esˈteɾo], Spanish for Saint-James-Upon-The-Lagoon) is the capital of Santiago del Estero Province in northern Argentina. It has a population of 244,733 inhabitants, (2001 census [INDEC]) making it the twelfth largest city in the country, with a surface area of 2,116 km². It lies on the Dulce River and on National Route 9, at a distance of 1,042 km north-northwest from Buenos Aires. Estimated to be 455 years old, Santiago del Estero was the first city founded by Spanish settlers in the territory that is now Argentina. As such, it is nicknamed "Madre de Ciudades" (Mother of Cities). Similarly, it has been officially declared the "mother of cities and cradle of folklore."
Restaurants in Santiago del Estero 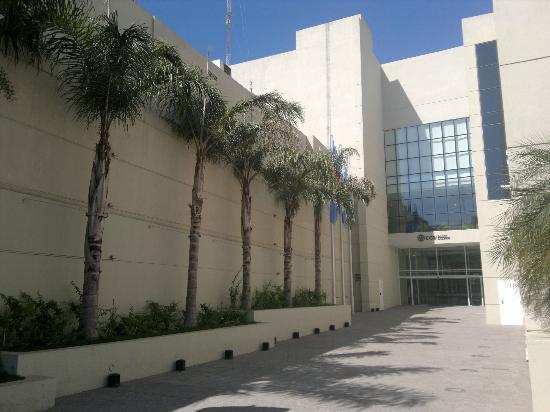 Bicentenary Cultural Centre is a museum complex that combines History Museum “Dr. Orestes Di Lullo”, Natural Science Museum “Emilio & Duncan Wagner” and Fine Arts Museum “Ramón Gómez Cornet”. The former “Cabildo” (government house during colonial times) has been recently refurbished and partially rebuilt and extended to bring together these three main institutions of the history of Santiago under one roof. The idea is not a bad one, and the pieces you find inside are diverse and many. From prehistoric animals bones to medals; from pre-Columbian pottery to contemporary paintings. The display techniques are appealing and contemporary, the building itself is spotless and smartly merges these three different areas. But.... the information is scarce (not a single map, nor a sign, nothing) and, which is even worse, originals and replicas are displayed without making any distinction. As an example, the back access to the building is an imitation of the “Colegio de San Gerónimo” Portico (Santiago de Compostela, Spain) and even when they do not say otherwise, they also choose to refer to it as “Romanic Portico”, which obviously is not. African sculptures are also imitations, as many other objects of the History Museum are.
All in all the place is worth visiting because even when it will leave you in want of more information, the pre-Columbian urns, pots, vases, figures are absolutely magnificent.
There is a very small fee for this attraction and is open from 9 am to 9 pm.
There is also a cafeteria on the ground floor, food is not bad and service is excellent. 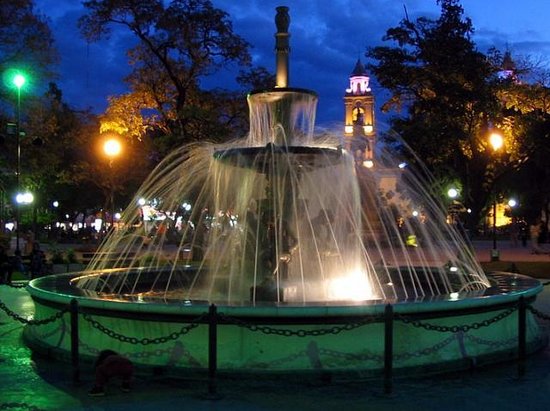 Plaza Libertad has recently undergone a face lift. Previously a predictable small city central plaza it has been transformed into an attractive pedestrian walkway where locals meet to chat about politics or gossip.... a favorite pastime of all Argentines. The tree covered square is lined with coffee shops, on one side the Cathedral, on another the Cultural Centre and in the middle an old fashioned bandstand where oftimes there are musical Performances. 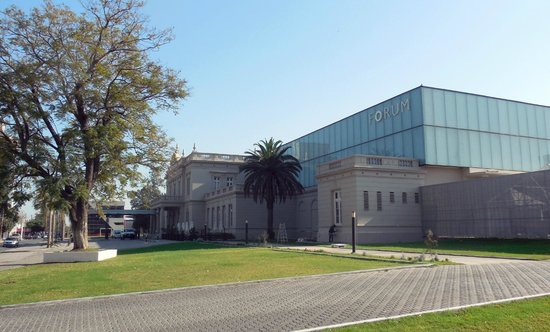 The Forum in Santiago del Estero used to be the main railway station in the days when trains were the mode of transport. Originally built by the English it stood abandoned long after the railway lines had been torn up for scrap metal and the sleepers recycled as fence posts. Today there isn't much left of the original station which has been turned into a convention centre. There is a stylish well furnished coffee shop inside where, even if you're not waiting for a train, you can get refreshments. 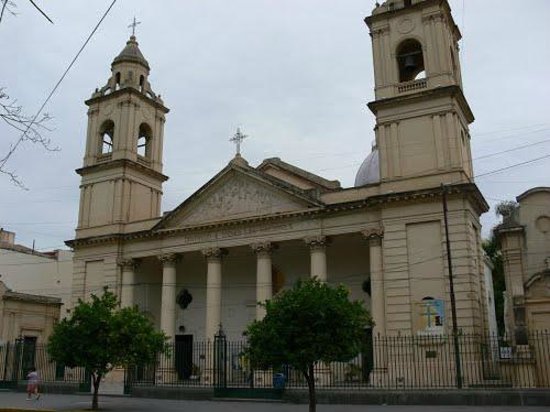 Over the years I have watched with great interest the renovation of the paint work in the interior of the Cathedral. It is now finished, is a tremendous improvement and the artist is to be complimented on a job well done. Inside is a cool respite from the over forty degree temperatures outside. Sit and contemplate. 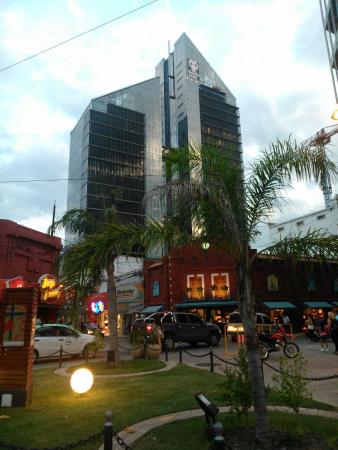 This large recently completed office complex is an interesting addition to the skyline of the poorest Province of Argentina. Built to house in air conditioned comfort the elite few, the twin towers have developed an inclination of late, attributed in all probability to the fact that the building is on sand and the water table is only three meters below. In years to come it may rival the leaning tower of Pisa as a tourist destination and really put this struggling city "on the map". 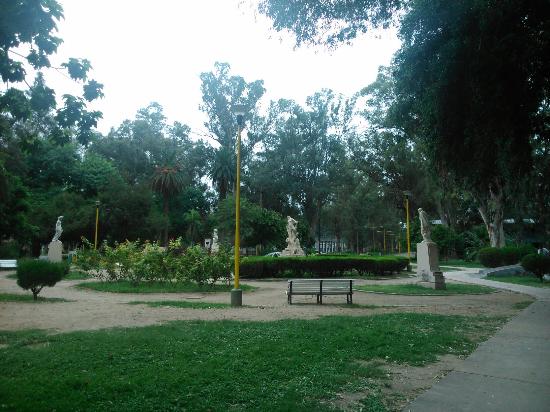 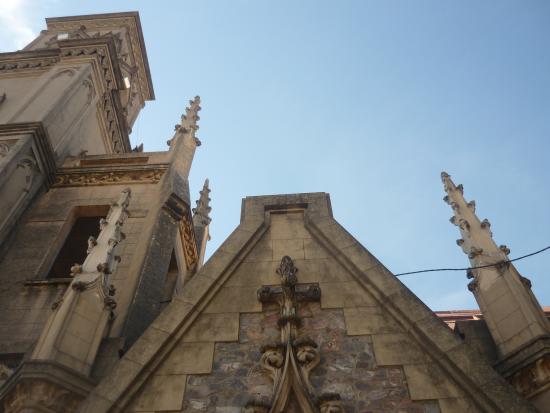 The Franciscan Order has been in Santiago del Estero since 1566.The first church building was located on the original site of the city.The second temple was built farther west, following the shift of Santiago result of flooding. The time and subsequent flooding of the Rio Dulce as deteriorated and had to rebuild, but in 1845 the building was demolished due to the danger posed by their facilities in poor condition.The parish church of San Francisco Santiago del Estero and Governor Juan Felipe Ibarra, at the request of Fray Miguel de Jesus Lopez contributed with donations to build the new church, completed in 1853. Three decades later, due to rain and the salt from the ground deteriorated. Once again had to be rebuilt and the opening of the building that endures to this day came on June 20, 1895. The restoration and maintenance is ongoing to this day, in order to preserve this heritage.The temple and monastery were declared National Historic Monument by Decree No. 123,529, dated February 6, 1948.The architectural style is neo-Gothic building with pointed arches, spiers and needles.Others believe that style is eclectic because they are present ornate Gothic and Corinthian and elements of neoclassicism and romanticism. Participated in the construction of the last facade builder and sculptor José Díaz Delgado Rafael Castro. Picture in the Church San FranciscoHe has great size and a Latin cross plan. It has three naves, choir, sacristy, ante-sacristy and two bell towers. The dome, eight segments, is clad in tiles Pas de Calais.Accessing it by steps leading to a covered courtyard, whose walls are observed several plaques with inscriptions remind priests of the Order or commemorate historical events.The gate of wood, with windows that show images of the life of St. Francis of Assisi lead to the interior, which also has magnificent stained glass windows that adorn and give light to the temple.In the aisles there are altars dedicated to San Lorenzo, San Benito of Palermo, Santa Lucia, San Luis Gonzaga, San Francisco Solano, Santa Rosa de Viterbo, St. Jude Thaddeus, San Cayetano, Santa Clara of Assisi, Jesus of Divine Mercy Sacred Heart of Jesus, Altar - San Francisco Santa Ana, San Joaquin, San Antonio de Padua, San Roque, Santa Rita, Our Lady of the Valley, etc.. Most of the images is very old bill.On the floor are slabs indicating the burial place where the remains of Priests of the Order. The high altar, wooden gold-leaf pine is of great size and beauty.To the right of the temple, galleries conducCelda Colonial Chapel of St. Franciscoen to Cell Chapel, eighteenth century reconstruction of the cell, in the same place where St. Francis built with his hands the dwelling where he lived during his stay in Santiago del Estero , during which time he evangelized Spanish, Creoles and Indians, using as weapons the Bible, the cross and the violin.It's a simple room with mud walls and thatched roofs and in which were placed some original woodwork.It saved the chasuble, the cord and stole of the saint died in Lima, Peru in 1610. 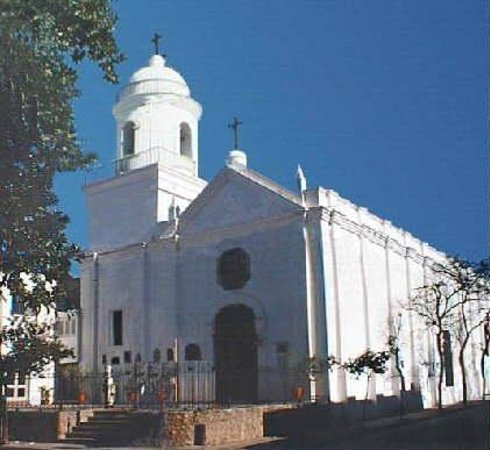 The historical background of this temple is as follows:The Mercedarios were the first order in the city going back to approximately 1557.However, In 1580, it hosted the First Provisional Cathedral of Santiago Del Estero as the Mother Church was destroyed.The flooding from the Rio Dulce back in 1628 took with them the first building and a new temple was built in the same location of where it is today. In 1817, a strong earthquake hit the city and collapsed and again it was built, but in 1824, two years after the inauguration and because edilicias failures, collapsed, but in 1823, it had ordered the suppression of the Order of Mercy to be a single parent, having been auctioned property. Furthermore, the congregation knew the santiagueña guard and maintained respect and love for his church and later a new building took shape with the support of Governor Ibarra who was a devotee of the Virgin. The same was inaugurated back on September 24, 1836. Incredibly, the following year a fire left it in ruins. It was finally rebuilt in 1851 and renovated in the mid-twentieth century, performing ongoing maintenance on it as usual.On February 24, 1942 it was declared a National Historic Landmark, according to Decree No. 112,099.The temple has a single nave, with masonry walls painted white. The roof and tile roof are supported by a wooden structure inside. The courtyard is raised regarding the sidewalk and guarded by bars.On the walls of the front there are numerous plaques referring to religious and historical facts. There is also a bust by sculptor Robert Delgado, of General Manuel Belgrano whose mother's family was originally from Santiago del Estero.The main facade is neoclassical, with a strong influence of traditional architecture. It has a round bell tower with three bells, the oldest dating back from 1739.It has a single door on which there is a triangular pediment which highlights a wrought iron cross and shield of the Order of Mercy.For a time the remains of Governor Juan Felipe Ibarra rested on this lot, but in 1875, his grave was desecrated, being moved to a secret place which even today is unknown.Inside are the magnificent stained glass highlights, along with carved confessionals. It is the image of the Virgen De La Merced along with a wooden baton ITIN which were both donated by Governor Juan Felipe Ibarra.There are also the Christ of the Holy Sepulchre who is also called Reclining Christ which is an ancient polychrome-size image which traditionally chairs the Friday procession at Easter and several images dear to the Catholic people Santiagueño feel like St. Jude, Our Lady of Sorrows, Jesus Nazareno, San Ramon Nonato, the Christ of Health and San Pedro Nolasco.

This is Santiago's oldest church. Small but quaint with a rather humble decor, it's a good part of a walking tour of the city, just a few blocks down the street from the main Cathedral on 24 Septiembre street. 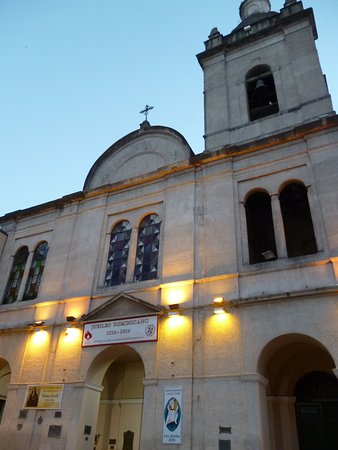 The Order of Preachers or Santo Domingo built his first temple in 1553 in a location that does not have too much precision. What is known is that the temple had to be abandoned because the government forced them to leave, until they returned in 1587 and 1593 and had a new temple.Definitely established in Santiago del Estero built a new temple in 1615 to replace the previous one was completely deteriorated. This new church suffered from floods in the area obliterating it completely, which is why the Dominicans decided not to rebuild and carry out their services in a small chapel. When the city moved westward, the order built a new monastery and temple until approximately 1793, because the facilities were in very poor condition, moved to the building that had belonged to the Jesuits expelled in 1767, taking his church and school. As all these buildings were in ruins, was erected in that place the present temple in 1881. Without a well defined architectural style, the temple we see today is in the neighborhood of Las Catalinas, witnessing the passage of the history of the province and the country.Inside, is venerated religious relics and historical as the Master Jesus, the Immaculate Conception and the Holy Shroud or Turin Shroud, which is a copy of the shroud that wrapped the body of Christ when he came down from the cross after crucifixion. It is a negative portrait of Christ on the canvas caused by the blood of his wounds and the vapors leave the body. It is unique in America and the second in the world for its fidelity to the real Shroud of Turin. Is exposed from the December 7, 1986 on one side of the altar, laid out on a case vertical, which I turned to see both sides of the sheet.At Easter the showcase is the busiest of Santiago.