Top 10 Things to do in Montgomery, United States

Montgomery is a city in Hamilton County, Ohio, United States, settled in 1796. The town was a coach stop on the Cincinnati-Zanesville Road, later known as the Montgomery Pike, with an inn, two taverns, a grist mill and a carding mill to process its agricultural products. It would remain a rather sleepy hamlet until the 1960s when it became an affluent bedroom community for people working in Cincinnati. It retains its historic downtown with many other 19th-century houses scattered throughout the community. It is currently accessed from exit 15 off Interstate 71 and exit 50 off Interstate 275, and it is the eastern terminus of the Ronald Reagan Cross County Highway about five miles northeast of the Cincinnati city line. The population was 10,251 at the 2010 census.
Restaurants in Montgomery 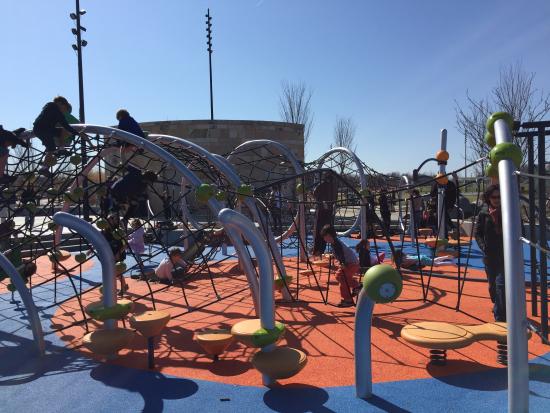 Reviewed By alawerdiomed - Fort Worth, Texas

bad response form General Manager, I thought the stuff needs training, how show hospitality, buy I discover that the General Manager also needs training to solve the guest concern and their problems, I am very shocks' thought I will have a great experience, I hope they don't trade everybody like me will be well bad for there reputations!!!!!!! 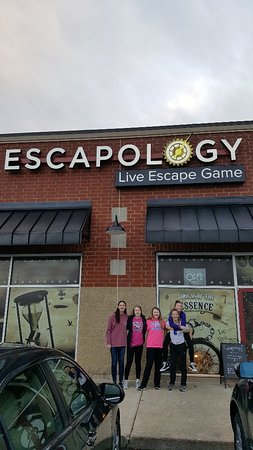 Time Travel is a reality. The Time Displacement Institute (“TDI”) was created by the Federal Government to monitor and fix illegal changes to the existing timeline. You and your friends are visiting TDI for a tour of the facility when sirens and alarms are blaring in your ears. With no time to spare, you and your friends are enlisted to travel in time to complete a mission and escape. Please visit our website, then select Cincinnati to view our daily game availability times and to book your mission.

There are 2-3 places in town offering escape rooms. They offered three scenarios, and we chose 'Extinction'. The setup was good as expected. However it was overly complicated for the average family. Perhaps 15-20% of families could complete it in the time allotted. It would have helped to know this when making the booking. Every other year family from around the country meet here for a family reunion. Catching up on what's going on. Having water balloon toss, and other games. A nice pavilion. Always a blast and very reasonable! 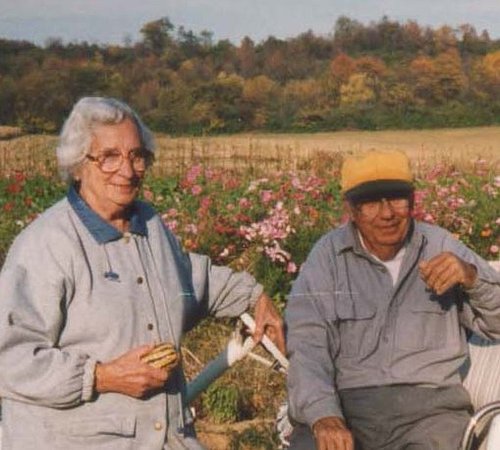 Gorman Heritage Farm is a 122-acre working farm and outdoor education center, which invites its visitors to explore and learn the history, methods and values of a working family farm in a natural setting. We are located on Reading Road in Evendale, Ohio. The Farm is one-half mile south of Glendale-Milford Road.The Farm consists of 30 tillable acres, a farmyard with a variety of animals, a garden, 40 acres of wooded hillside, and a natural pond. We enjoy visits from members, casual visitors, school groups and many others during the course of the year. The paid staff includes both farming and administrative professionals, supported by a strong cadre of volunteers. Don't miss our annual Sunflower Festival, always the first full weekend in October. Cut your own sunflowers from our acres and acres, find your way in our corn maze, take a hayride, hear some great local live music, visit our food trucks and arts/crafts vendors. Most of all, make memories to last a lifetime!

In comparison to say Browns Farm
in Ross this place was pretty terrible. I'd love to know what exactly they spend your money on because the grounds were very very poorly kept. The children's garden was full of tall grass and
weeds, my daughter couldn't get down and crawl at all. There were very few animals to see. What bothered me most is they had no produce available for sale in the middle of July, really??

I just really felt you got nothing at all for the money. I'd never suggest anyone visit this place. 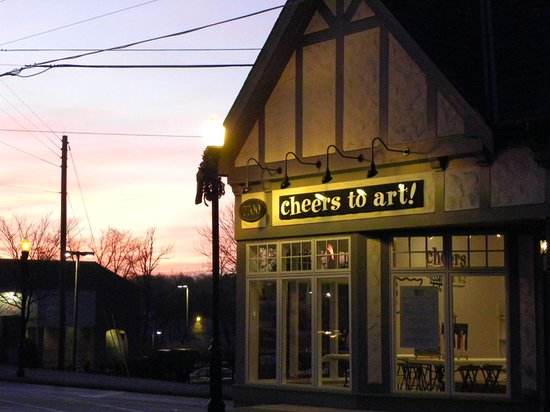 I went to Cheers to Art with a group of coworkers and my husband. We had a great time and even better since it was wine down Wednesday where they have half price bottles of wine! Great wine at great prices. They have a great...MoreThank you so much for taking the time to write such a kind review. Hope to see you again soon. Cheers! 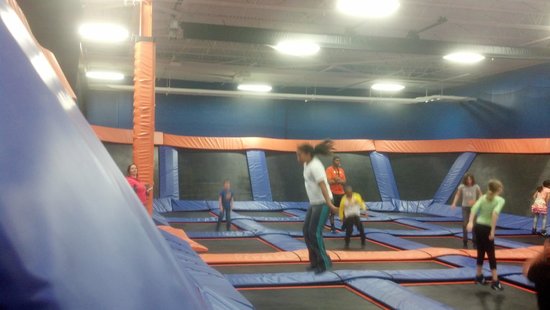 Sky Zone features the worlds first all walled trampoline playing courts. Come bounce off the walls-literally! Dip, dodge, duck, dive and fly with 3-D Dodgeball. Try a SkyRobics fitness class, host a birthday party, corporate event or other special event. It's truly the ultimate play experience for kids and adults of any age, size or physical ability!Before You Jump Tips:1. Every jumper needs to have a signed Springdale liability waiver in order to jump. Jumpers under the age of 18, must have it signed by their parent or legal guardian. The form is available on our website. 2. Size separation is enforced on our courts. For safety reasons, all jumpers will be placed near jumpers of a similar size. 3. Dodgeball is a popular activity and cannot be guaranteed.4. Purchase your tickets online ahead of time to avoid disappointment, this is highly recommended, especially on Fridays, Saturdays, Sundays and on any school holiday.

The location is a little out of the way but it is a destination. It looks like it couldn't be that big but it is quite large. There are several jump areas, a party room and snack area. We went to a birthday party there....MoreThank you so much for your positive feedback. We are happy you enjoyed your day at Sky Zone!

7. The Queen City Brewery of Cincinnati 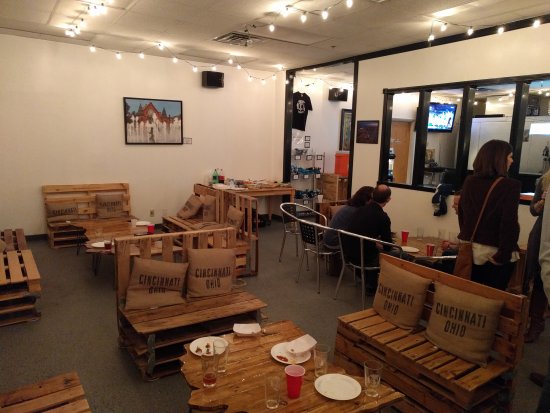 This is a newer place with the brewers just starting to stretch their collective creativity for beer styles. Their flagship brews are very, very good. I am hesitant to say excellent because I reserve that for the upper echelon of micro-brews (and I've had more than you can imagine). The inside is very fun with benches and tables inventively made from leftover wooden pallets. There is one TV near the bar which can accommodate about 12 people comfortably. Don't necessarily go for the atmosphere, but DO GO for the beers! The Loveland Castle, is just that, a small castle nestled on the shores of the Little Miami river. The castle and it’s grounds are very casual, everything is self guided. It only takes 15-20 minutes to tour the property, but don’t miss the video on the second floor detailing the reason for the castle and the building process. We had our small dog with us and the caretaker on duty allowed us to take her inside, as long as we promised to clean up any mess she may make. Our 6 year old niece was with us and kept saying how “ cool” the castle was. Kids are free, its $5 a head for adults. There is no plumbing in the castle so be aware bathrooms are portalets outside and there is no food or drink available. The castle is worth a look. 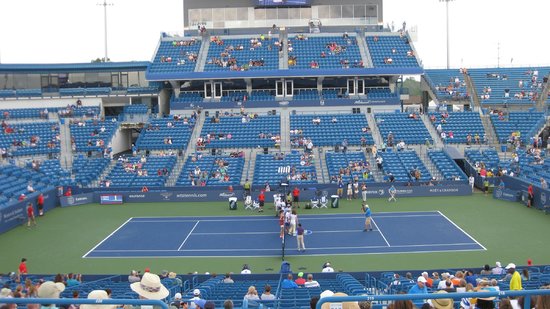 This is our third time attending the W&S tournament. In 2017 (this year) we attended the opening Sunday morning session from 10 a.m. to 5 p.m. We had box seats ($100/each) on center court which were lovely, however we spent a lot of time out of our seats walking around the other fifteen courts watching practices or visiting one of the other three stadiums, taking a seat and watching a set or two of the qualifying matches. We saw many of the star players practicing on the outlying courts and we saw several stars at the entrance to the players' center (where fans could wait to get autographs).

Our box seat tickets came with access to the Racquet Club, which is a covered patio attached to Center Court with comfortable seating, bars, TVs to watch the matches or other sports, and a buffet. As I recall the lunch there was about $17 although we did not eat in the Club. (The Racquet Club shelter access was especially important last year when there was so much rain during the matches.) We also had preferred parking very close to the Lindner Center for an extra charge which I appreciated--and I believe after the torrential rains that occurred last year during the tournament management upgraded a lot of the parking and improved parking logistics.

The crowds were not very big during our visit so we enjoyed strolling around the grounds, visiting the food court, stopping for a wine cooler, listening to a band, and doing a little shopping. I think our day was a special promotion for high school students as I saw a lot of young people with polo shirts with their tennis team logos. There was also a hospitality tent for prospective Miami University students. Our day was also a feature day for Dayton fans. So I believe there are many special promotions for tickets if you check around for better pricing. There are also a number of corporate hospitality tents which are lovely air conditioned venues that we have visited in past years. And if you need tennis equipment and supplies, stop at the big 'Midwest Sports' tent on the grounds. (And they have a big outlet store not very far from the Lindner Center just off 275 at 11613 Reading Rd, in Sharonville too).

The Western & Southern tournament is a fun way to see some great tennis. It would be a wonderful treat for any avid tennis player. It's much more laid back than the US Open or Wimbledon which I have attended a few times as well, but it is a great experience. If you are thinking of attending with young people, taking in the tennis on one of these early days would be ideal. And there is also Kings Island amusement park, the Reds, and FC Cincinnati Soccer if you want to put together several days of fun for the family. We will probably go back later this week for some of the finals and I will let you know how that goes. 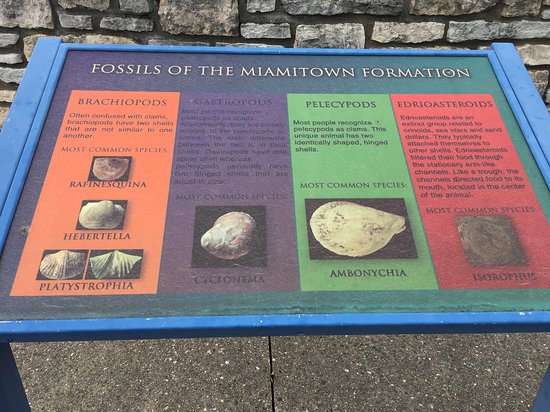 We were travelling around the area visiting state parks.....and saw information on this location. It sounded interesting.....so we stopped in.

The park is fairly small.....but it has great signage describing the various layers you were looking at.

Some of the slopes are a bit steep....so wear comfortable shoes.

My wife and I found several really nice fossils......and we each kept one......to take home.