Top 10 Things to do in Giethoorn, The Netherlands

Giethoorn (Dutch pronunciation: [ˈɣitɦoːrn]) is a town in the province of Overijssel, Netherlands with a population of 2,620. It is located in the municipality of Steenwijkerland, about 5 km southwest of Steenwijk. Giethoorn is often referred to as "Little Venice" or the "Venice of the Netherlands".
Restaurants in Giethoorn 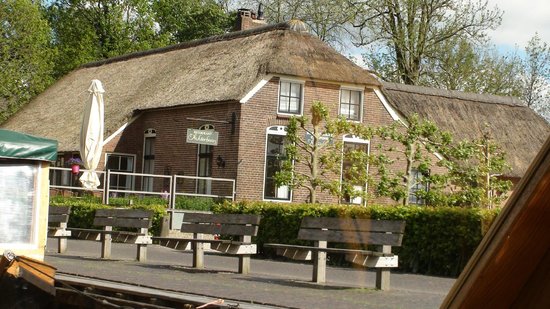 Giethoorn has gotten some listings in travel sites about being one of the most beautiful spots in the world, so on a recent trip to the Netherlands, we had to make a stop to see for ourselves. Definitely glad we did, right down to renting the little motorized punt boat. There are small barges that you can take you out into the canals through town, but you'll have a LOT more fun if you do it yourself. Truth be known, there are LOTS of companies renting boats - we enjoyed Smit Giethoorn but don't feel that they are the only option. Regardless of whom you go with, GO TO Giethoorn! 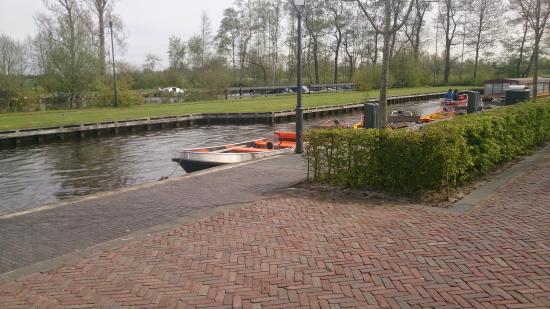 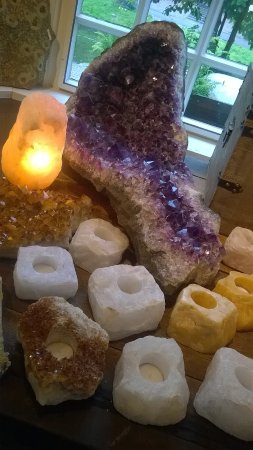 To me this mineral collection looks quite stunning. I've seen other such collections, but here every piece is displayed in such a way that you pay attention to it. Or maybe it's the beauty of the minerals themselves. There is a large egg of an extinct ostrich, apparently the world's largest fossil egg. And there's more fossils, but that's not the focus of the museum. I think this is a nice distraction from the touristic village of Giethoorn and its boats. 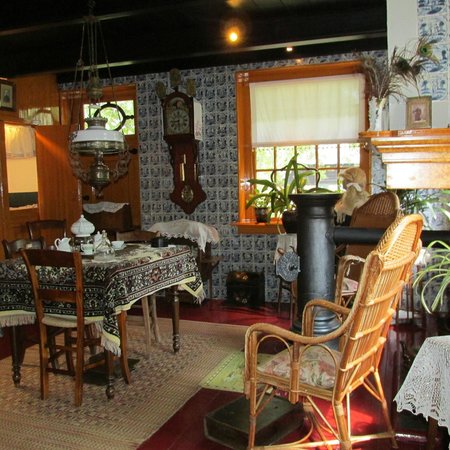 Giethoorn is a little village offering a number of attractions. Beautiful old style homes and buildings, walkways along the little canals, boat hire, shops, restaurants, museums, bungalow hire, B&B, cycle hire. This was an amazing surprise. We spent the entire afternoon wandering around and just enjoying the atmosphere. It could also serve as a romantic getaway as seen from the many young couples enjoying the boating and having fun. It is also pet friendly. It is one of the places one could include in a visit to Holland and the rural areas. 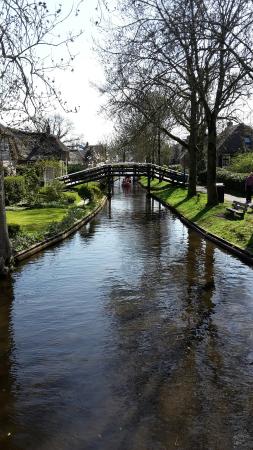 Small, quiet town located in the northwestern part of the province Awrisl (Overijssel), Netherlands.It is recommended to dedicate an entire day to this town.
A magical place, must visit it. Entry is only allowed vehicles on the outskirts of the city. Parking is not a problem to find at all. There are two options to explore the town: one leg and the other on a cruise. First, it is better to walk around and get to know this amazing town. Narrow paths surrounded by rivers of water areas that surround the house. Every few meters there is a wooden culvert.Which leads to another part of town. Amazing homes, have been taken from fairy tales. And well manicured Gardens. You can wander hours and not feel time goes by. After a long trip on foot, you may want to hire a vessel sailing in and out of the canals that surround the house. And then sail the Great Lake and the amazing nature reserve. 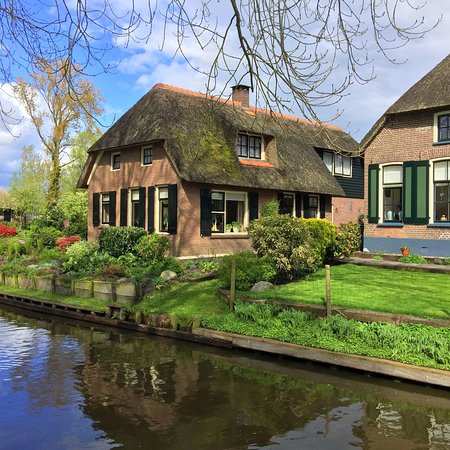 Professional canal cruise company which provides guided tours through the Dutch Venice: Giethoorn. Boat-, bikes and Canoerental. Restaurant with typically Dutch cuisine like pancakes, sandwiches, meat and fish plates, dinners and grill, also pizza and pasta's like spaghetti.'t Zwaantje has it's own large parking (free for guests) and is situated directly next to the busstop center Giethoorn.All the boats, including the canaltouring boats, are driven by electrical engine. The guided tour is with life guide in Dutch, German and English or via audiotour. Going with a socalled whisperboat yourself, maps available in Dutch, German, English, French, Spanish and Italian.

Getting to Giethoorn from Amsterdam can be tiring and time consuming. The most convenient solution is to take a direct train from Amsterdam Zuid to Zwolle then bus 70 to Giethoorn; alternatively, you can get to Utrecht then take another train to Steenwijk; once in Steenwijk, get on bus 70 to reach Giethoorn in around 15 minutes. Be aware that buses run on a reduced schedule on Sunday: the last direct bus to Steenwijk is at 6 pm and the last one to Zwolle (which is not direct, you have to change in Zwartsluis) is at 6.40 pm. The entire trip will cost you around 50€ so consider spending at least one night in town.
Get off at bus stop Dominee Hylkemaweg to be right at the center of the village. Walk along the Promenade beside the main canal to get to old town Giethoorn and enjoy the beautiful views. Or even better, rent a boat at one of the many rental agency on the Promenade.
't Zwaartje is the first and biggest one you will run into when walking from the bus stop to the center. We rented a small electric boat (they also have bicycles and canoes) for two hours spending around 40€ (you can get a slightly cheaper fare at the smaller agencies further away). The boats are very easy and safe to drive, they don't go very fast which is a good thing considering how many inexperienced tourists rent them! The owners will give you a map of the canals with a few suggestions on the tours to take. Although we only rented the boat for two hours, we managed to complete the 3 hour tour they suggested - I highly recommend it, it gives you a unique opportunity to explore the lake and the Weerribben-Wieden national park. I assume the tour can take a lot longer if you visit during a very busy day.
Giethoorn and its surroundings are magnificent, don't miss an opportunity to visit - you won't regret it. 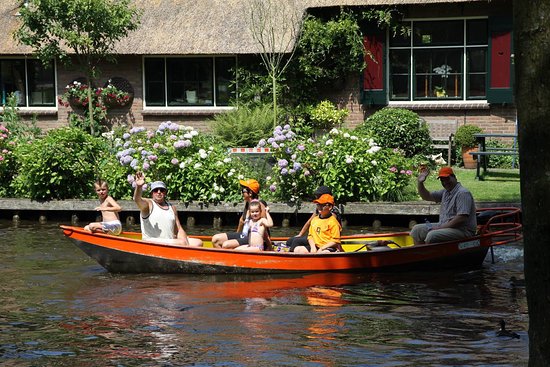 Ron, a "native" Gieters, gave us a wonderful tour of his village. He was very knowledgeable and could answer all of our questions ranging from the history of the area, agriculture to roof thatching!
We were on the electric whisper boat, which is much better than the petrol powered tours, as it is a lot easier to hear the tour guide.
Would highly recommend! 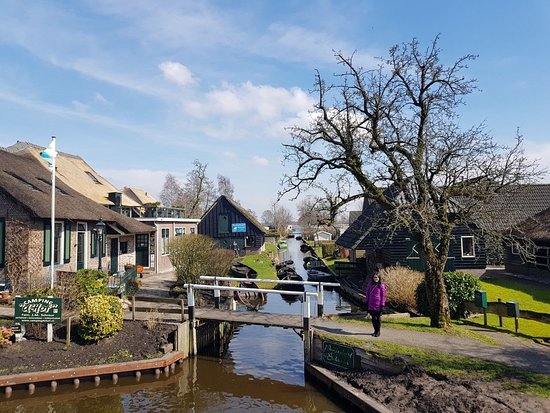 This cruise tour company cannot possibly get it wrong: it is situated in a village straight out of fairy tales. Yet, they managed to spoil my time on their boat. My family of 3 got into the boat early. It filled up quickly. As we were approaching the cruise time, a group of 4 older women came and wanted to sit together. However, there were only single spots left. The tour guide left the situation in the hands of the manager, an older gentleman, who bullied a man into changing seats next to another person. He was going to separate us as well, but I stood my ground. Finally, 2 of the 4 latecomers sat together and the others were spilt.
The gall of these women went further: one of them demanded that her side lower the window, which had been open so everyone could enjoy the view. It was cool, but the view was well worth it.
So not only did the company bend over backwards to accommodate this party at the expense of others who arrived early, but also penalized everyone by allowing them to dictate the window status.
Poor logic and people management. 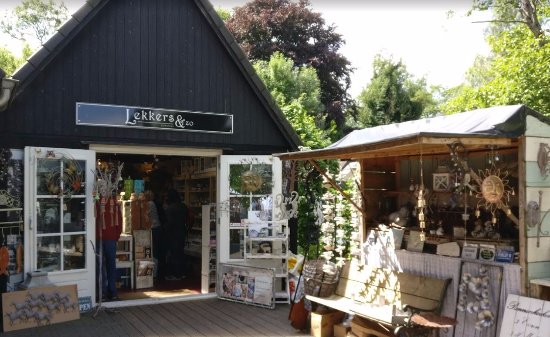 This is an absolute must. If you love boutiques that are independent that offer unique ideas, this is the place to come. The owner is extremely friendly and handcrafts the soaps (as well as other gifts) in the shop. It is small and fully packed with wonderful gifts that will make you want to spend more time in the shop (although it is not that big). We were going to purchase three bars of the hand soap as well as some other items when she suggested that we would save money and have more buy purchasing one of the bungles. We were not disappointed - these are amazing. The Bunzlau Castle soap dish was the perfect addition to our sink area. This is what boutique shopping is all about!!! 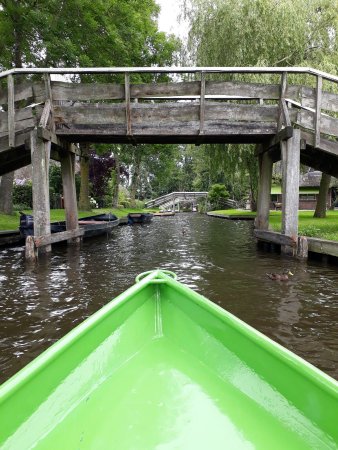