Top 10 Things to do in Banja Luka, Bosnia and Herzegovina

Banja Luka (Serbian Cyrillic: Бања Лука, pronounced [bǎɲa lǔːka]), or Banjaluka (Serbian Cyrillic: Бањалука), is the largest city and the de facto capital of the Republika Srpska entity and the second-largest city in Bosnia and Herzegovina after the capital Sarajevo. Traditionally, it has been the centre of the Bosanska Krajina region, located in the northwestern part of the country. It is home of the University of Banja Luka as well as numerous state and entity institutions of Bosnia and Herzegovina. The city lies on the River Vrbas and is well known in the countries of the former Yugoslavia for being full of tree-lined avenues, boulevards, gardens and parks. According to the 2013 census, Banja Luka has 199,191 inhabitants.
Restaurants in Banja Luka 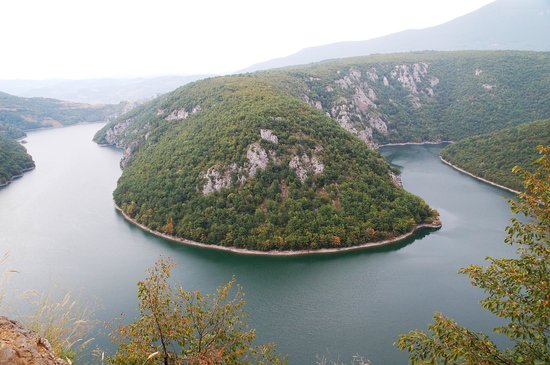 In some part very good for relaxation in some part you can enjoy rafting, canyoing. In the city center you can seat on the bank or in restaurants. There are also few camp sites. 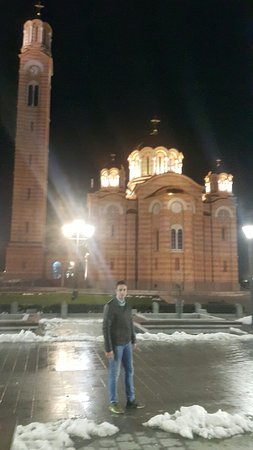 Christ the Savior Cathedral Church is one of the most important orthodox churches in Bosnia&Herzegovina. It is located in a big square, in the center of Banja Luka, the main city of Republika Srpska (the Serbian region in the Bosnia&Herzegovina). The place is very beautiful, and the square is a very good site to sit down, relax and eat something while you see the big and very beautiful religious building. Pitifully, I cannot go inside, because it was closed, when I arrived in the city.
(See also Museum of the Republika Srpska, Tvrdava Kastel and Republica Srpska Art Gallery) 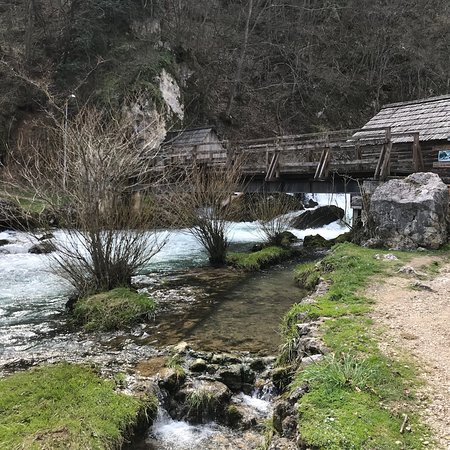 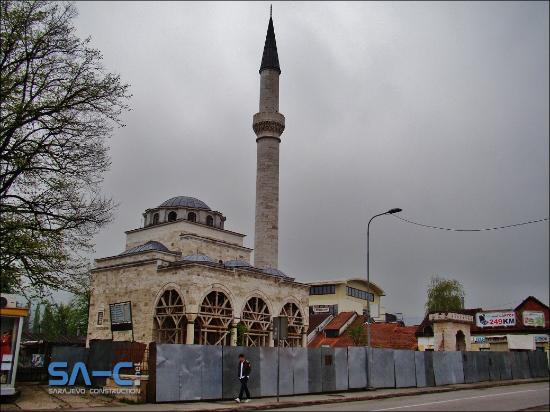 Ferhat Pasha's mosque, known as Ferhadija, was built in 1579 and represents (with Gazi Husrev Bey's mosque in Sarajevo) the most beautiful monument of Ottoman sacral architecture in Bosnia. All 16 mosques in Banja Luka including Ferhadija, and also some Catholic churches, were destroyed by Serbs during the war 1992-1995 in city where there was no war conflicts. They were destroyed using explosive during the night. Remains of Ferhadija, destroyed on May 7th 1993, finished in Vrbas river and on dump. On the place of Ferhadija was later parking space. In 1998 Serb extremists didn't allow Banja Luka's mufti Ibrahim ef. Halilović to be burried on the place of ex Ferhadija. In 2001 extremists attacked believers who came to lay the cornerstone for new Ferhadija and one man was killed. Reconstruction took 11 years, all found remains and traditional building techniques were used so new mosque is identical to original one. It was solemnly opened on 23rd anniversary of destroyment.
Ferhadija is breathtaking both outside and inside. Beautiful carpets, colored glasses and ornaments inside mosque seem very attractive. Inside the Ferhadija complex there are souvenir shop with both Islamic and traditional Bosnian souvenirs and cafeteria where you can try original Bosnian coffee. When I wisited there were young and very kind guides Adnan and Senad working there and they are ready to answer any question. They also showed me room for ritual washing (wudu/abdest). My visit turned into half an hour long pleasant talk about mosque, Islam and life of Bosniaks and young people in Banja Luka. Visitors have to wear long trousers and there are free scarfs for women to cover their heads. Before entering you just have to put your shoes outside. I think every visitor of Banja Luka must see this unique mosque. 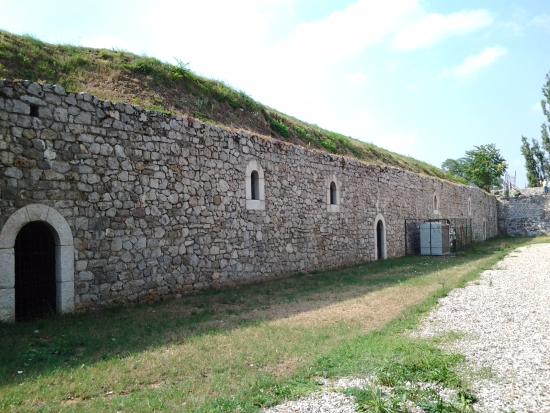 Surely it's one of the best places in Banja Luka but certainly it's nothing special. Still worth the visit and perhaps spending some time on the river side next to it. 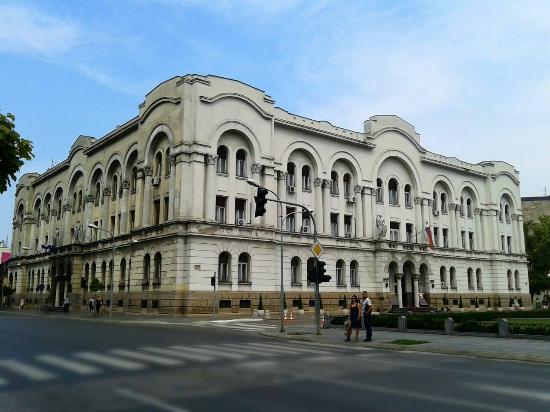 Reviewed By around93 - Udine, Italy

Banski Dvor hosts nearly every day an event , and it is impressive the variety of free evenement they offer : exibitions , Concerts , round tables , book presentation .. and Banja Lukaa is a very pretty city, you will be amazed by the people , landscape and food :) 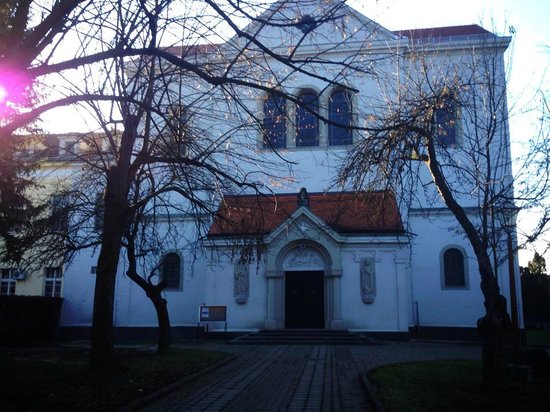 If you are visiting Banja Luka, one interesting thing to do is to visit the Trappist Monastery. Trappists are an order of Catholic Monks. The facility and church are gorgeous and peaceful, on the outskirts of Banja Luka. It as pretty impressive. I was amazed that the city of Banja Luka does virtually nothing to emphasize one of the few touristy things the town has to offer. The monks used to run the brewery, and I loved this old advertisement for the Trappist Beer. This smiling monk would be a fun marketing image for the city. The monks used to do a wide range of things, including woodworking. Attached is a photo with one of their chairs. Unfortunately, there are now only two monks left at the Monastery. Before WWII there were some 260. As they explained to us, they lost most of their properties and facilities to the Communists after that war, but one of them still makes Trappist cheese. We bought cheese from the monk. The contact person if you want to arrange a tour is Pater Zvonko Topic: 051-300-951. Otherwise just show up for mass on Sunday mornings at 10 am. We did, and they were so thrilled to have foreign visitors, they offered us a full tour (which was fascinating). 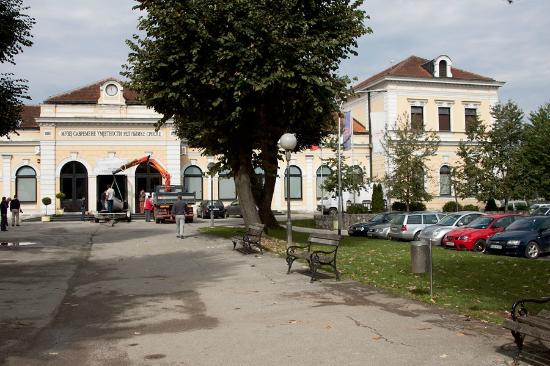 The Museum of Contemporary Art is in a historic building-- a lovely old train station that was converted in 1980 to be used for other purposes. Here you will find the largest collection of contemporary Serbian art in Republika Srpska. The small museum is also centrally located -- it is actually just across the street from the old Cathedral which is another main attraction. Entry was free, and when we went, one room was being used for a wedding! A noisy gypsy band was playing outside -- quite the video opportunities! There were also men playing chess on an oversized board in the green area by the museum. We enjoyed a very good photography exhibit -- a Serbian woman photographer who in the early 1900s made use of the then-new and high tech Kodak camera. When you visit Banja Luka, this art museum is a place you must see to learn more about the culture of the area and appreciate Serbian art. 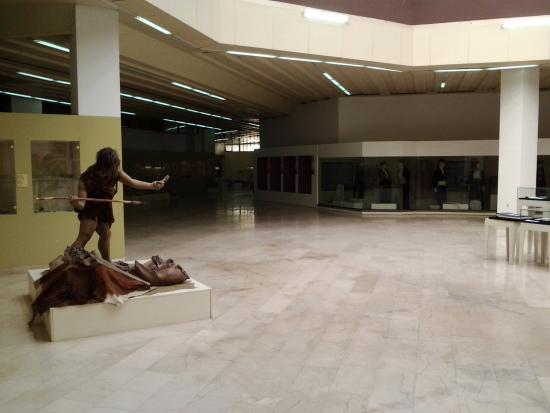 This museum wasn't loaded. But it was fairly large for this size city. There was a nice variety and some very interesting exhibits here. I would recommend a visit here. 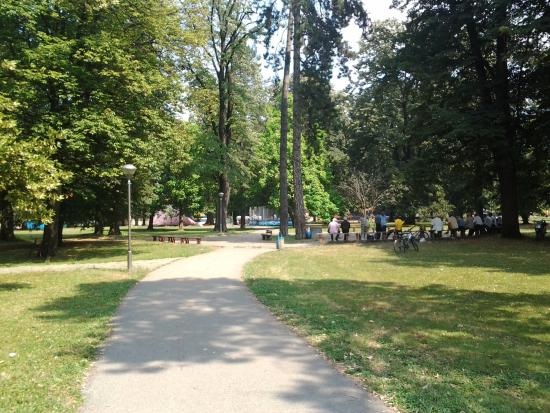 This is a really nice sized park located downtown. There are many places to sit here. And they have a number of things for children to do.