Viseu (Portuguese pronunciation: [viˈzew]) is a city and municipality in the Centro Region of Portugal and the capital of the district of the same name, with a population of 99,274 inhabitants, and center of the Viseu Dão Lafões intermunipical community, with 267,633 inhabitants.The city of Viseu has 57.000 residents in it`s historic center.It is an immemorial city.
Things to do in Viseu 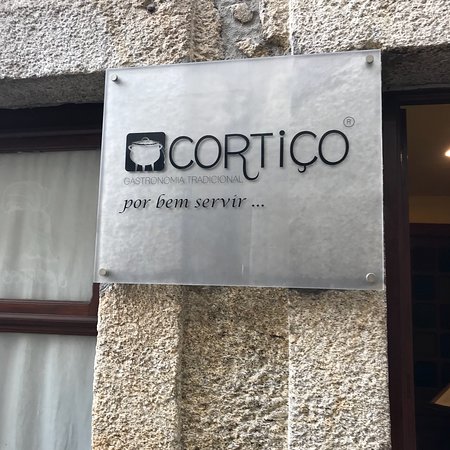 Stayed in Viseu two nights at the Pousada, and thought we would eat out. We came across this totally unpretentious little restaurant in the centre of town, and looking at the menu outside, with a waiter standing by, expecting to be encouraged to go in, were pleasantly surprised to be left alone. So, we went in. An elderly man, who looked like he might be the proprietor greeted us politley, without fuss, and showed us to a table. Small place, beautifully set up, no frills, like home. Not a huge choice of menu, we opted for the veal stew. He suggested that we order just one portion, and that that would be enough for two. He was right. For the wine, he only wanted to know the colour, so we asked for red. All this so far may give you the impression of a bistro type eatery, or a rural auberge in France, but trust me, it was far better. The veal, when it arrived, turned out to be the tastiest I have ever had. The accompanying vegetables were sublime. The red wine, served in a wooden pitcher was of a more superior quality than you would get in posh restaurants. For dessert he could only offer us pears, so we settled for just coffee. The bill came to 35€ with tip. And here comes the ultimate confirmation of the excellence of this place: we went back the following evening, as I had seen octopus on the menu, and it was succulent, juicy and tender, served on a sizzler. The wine again was very good, and this time he had chocolate mousse and creme caramel on offer for dessert, both of which were light, not too sweet and perfect to finish the meal off with. With coffees and the tip, it came to 55€. The rest of the clientelle all seemed to be local Portuguese. The owner(?) who served us both evenings was very polite without being cheesy. No fuss, no ceremony, just genuine hospitality with brilliant food. A rare jewel. 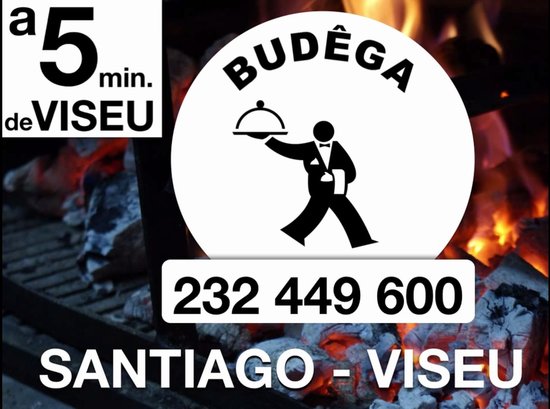 Old fashion way of tipical portuguese food; good environment and nice attending service. Wine list poor, but with a good regional representation. This was the telegrafic presentation for those in a hurry..
Rock bottom evaluation: don't expect french look alike waiters, but you get a tipical smile and a always available service. And yes they speak french, english and spanish... People are simple and worried about you.
About what makes you go there: the food. Outstanding! I've been in many restaurants, mainly in Spain, where they sell you, so they say, the best meat in the world..., but rarely, i tell you not with quality of this place. One might say, as it happened to me on a particulary day, the meat was not so tender, but believe me, most of the times it melts in your mouth....!
The "tiras da barriga", is absolutely delicious, tasty and you always want some more...Also "alcatra" piece is excellent; the "picanha" is also good, but common, i'm afraid.
All this is served with potato slices made on the grill (as well as the meat, of course) , white rice, salad and/or vegetable and beans rice, wich i recomend only in winter, and it is superlative, fabulastic...!
Dessert options are many and tasty, and between the fruit offers, i recomend mango slices.
As always, portuguese coffe to relax, wich is one of the best in the world, if you don't mind me saying this...
So, go there hungry, and leave ready to take a siesta somewhere...
Have fun!

For meat lovers (grilled or roasted) Casa Arouquesa allows to obtain a meal of excellent quality. It has a good wine list with varied options. The space is nice and quiet. Good location in the entrance / exit of Viseu in the direction of Coimbra. 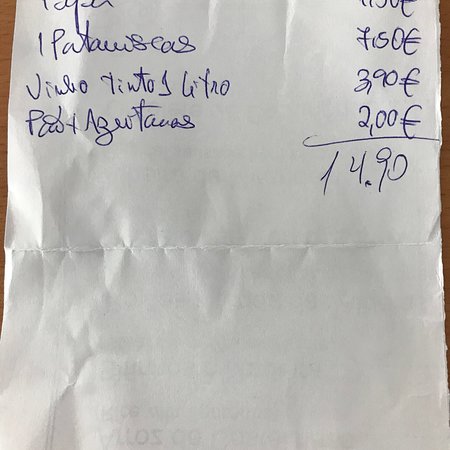 We came for lunch on a weekday; not very busy. The dining room immediately gives a feeling of "old times", and the food is very much aligned. It feels almost like you are eating what your grandma used to cook.
We both had sole , very fresh and then a very tasty "bolo de bolacha" ( with coconut, which is very unusual) .
Very friendly service at bargain prices.
This place deserves your visit! 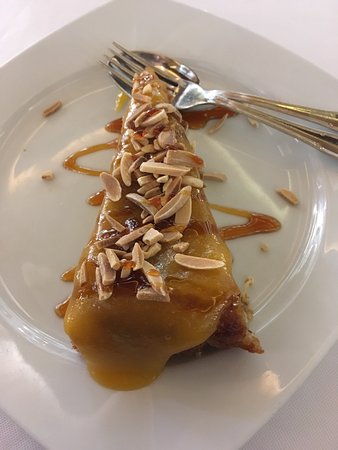 Have passed by this place every year on the way to visit grandma. Finally stopped in today. Best steak in Portugal. Tender and flavorful. "Posta a magarenha" was delicious. Average prices. Huge place. No Reservations accepted so may have to wait for a table but well worth it. 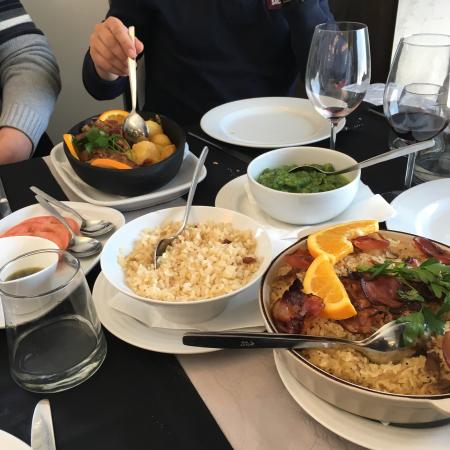 We visited this restaurant by invitation of our business partner. It was really nice food with nice wines. I can recommend this place. 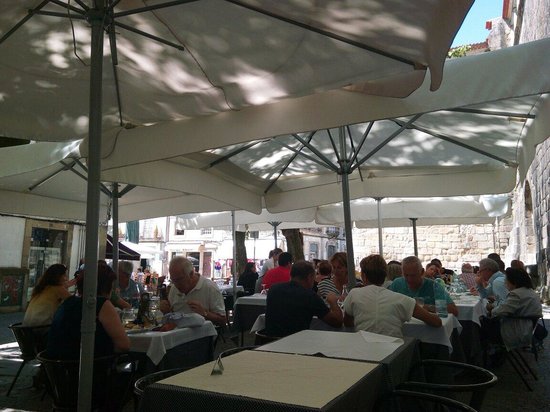 Having known this restaurant from previous trips to Viseu, it was a surprise to see it revamped. Located close to the Cathedral, it oozes history, but the now whitewashed walls present it with a twist of modernity. The amusing restaurant-themed pictures that hang on the walls are in-tune with the service, which is very welcoming and friendly; they are always on top of things and ready to make suggestions.
Our party of eight mostly opted for the stake, which came with a wonderfully smooth creamy sauce, and French fries. Some ordered the octopus rice and one the vegetarian dish. While we waited, we had a local cheese, smoked ham, olives and bread. Everything was full of flavor and delicious!
During the course of our meal, the restaurant got full. We could see families, couples and groups.
This traditional restaurant has adapted to a new era, but managed to keep old clients while welcoming new ones.
Will come back for sure! 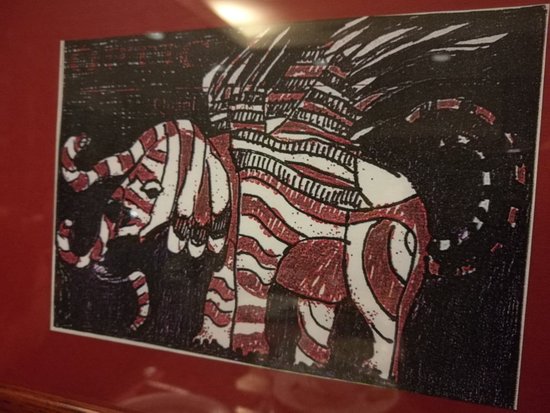 First class service. Lovely ladies.
Been on many occassions.
Clean! Cleanest toilets in Portugal.
Pizzas and beef and chips style food all freshly cooked to order.
Amazing value.
Not the most delicate or authentic pizzas (too much cheese), but good all the same.
All freshly cooked PROS
- Food quality: To me the main PRO of this restaurant, the food served is made with quality ingredients and perfectly cooked;
- Menu variety: A few options of genuine portuguese food, also the wine sellection is impressive. Wide and with great top quality wines;
- Service/staff: very efficient and professional, also friendly not too much, the right kind of sympathy for a restaurant;
- Price: Is not the cheapest options in the city, the average price per person with starters, main, dessert and drinks is around 15€/20€, depends the ordered wine also.
CONS
- Not easy to find it, is really in a dead end, without the mobile phone indications I would never find it. But there's plenty of space to park the car;
- Small restaurant, booking in advance may be helpfull.
DO I WILL RETURN?
- For sure yes! 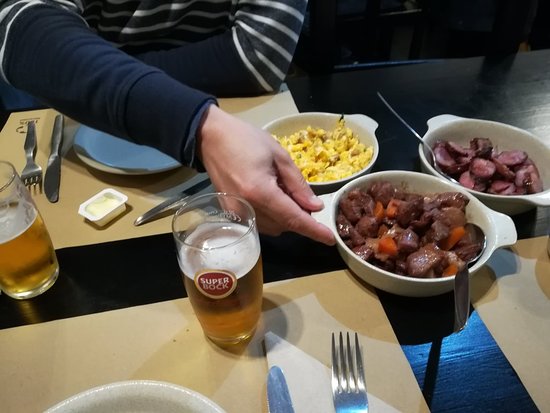 Portuguese tapas and only tapas. Some are really tasty (chicken) others no particular taste nor special food
Disappointment on salty vegetable, octopus etc.
So food not worth it. Good wines choice
Smiling and helpful staff
they have a menu in English. Small restaurant u need to book
Price is upper range for Portugal