Vela Luka (pronounced [ʋela luka] ( listen)) (Italian: Vallegrande) is a small town and a municipality in Dubrovnik-Neretva County in southern Dalmatia, Croatia. The town is located on the western side of the island of Korčula at the bottom of a wide bay which has many indented coves. Vela Luka developed at the beginning of the 19th century in a deep sheltered bay. Its name means "big harbour" in Croatian chakavian. Inhabitants of the Island of Korčula and Pelješac often refer to it simply as "Luka" (the port/harbour). It has several hotels and a medical centre called Kalos (for rheumatic disorders and rehabilitation). The inhabitants are farmers, fishermen and workers in tourism. Also the town has other smaller industrial plants.
Things to do in Vela Luka

After Reading great reviews, hearing some hype about this place and tried so many other places in the Island, we were excited to go check Konoba Mate out. Pretty nice setup Seating next to a vine with uniquely shaped grapes hanging of off it I haven't seen before. I would have preferred benches with some back support though. We ordered all the dishes up front. For starters, we ordered their famous grilled goat cheese-filled figs wrapped in a bacon strip. Pretty innovative and interesting combo of flavors, but they were delivered cold. And it only went downhill from there. After 1hr and 40 minutes after arriving, we were served the main course. Despite being quite used to Dalmatian take-it-easy style (we are on vacation afterall), we thought this was quite excessive. It was also interesting that a group that arrived after us was served the main course ahead of us. Nobody came and even asked if we need anything or explain the wait. Kids ordered their goat cheese ravioli with sage which they claimed were tasty although they said they could easily master another piece of two (you get 6 pieces per person). My wife scored it with tuna pašticada that was very tasty and well executed - it was also the dish recommended by our friends who go to Mate regularly. It was also plentiful, we all had a try. I got the short end of the deal by ordering grilled lamb and an order of grilled vegetables. I've had this dish elsewhere but this is the first time it consisted of about 50% bones (see pics). The only one grateful was my dog who seems grateful after crashing them. The grilled vegetables were completely cold - also the first. I noticed they charged us for bread (we only ate a couple of pieces) which many restaurants still don't do. I find it kind of silly to be charged for it with not an inexpensive meal knowing how cheap the bread in Croatia is.
I probably would have written this review if the waiter upon me telling him about the wait and lamb and that he can't expect we will return, responded with something more customer-friendly than: I won't return next year either. I paid the bill but will be spending my money elsewhere on the Island as there are plenty other great choices. 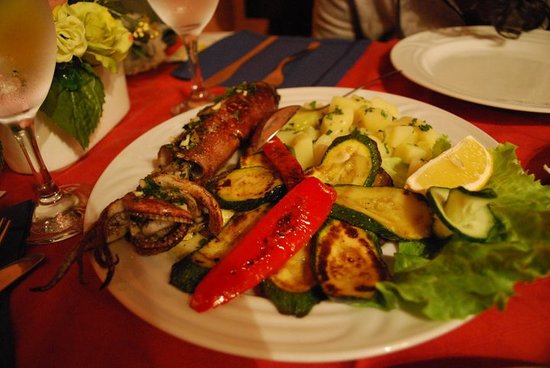 This food was delicious! It is a family owned place. We did not have Reservations so we could not sit outside but inside was perfectly lovely. We could see everything that was going on which was interesting. They cook the food in what looks like a brick oven but it has coals and a grate that they cook on. I had the prawns, my daughter had mussels, and my husband had the seafood pasta. It was all delicious. They do speak English which was helpful for us, but nearly everyone does. We enjoyed this dinner very much. 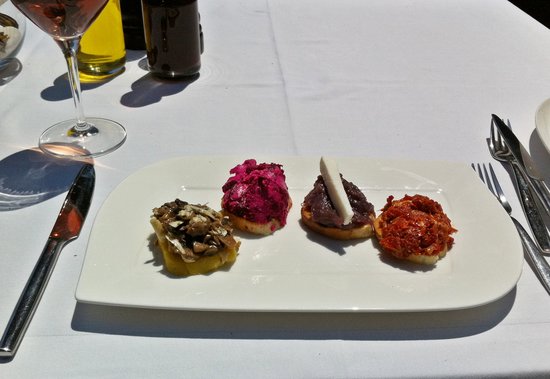 We read mixed reviews on LD but was highly recommended by another restaurant Silk and our group could not have been happier. We had prompt and friendly service - meals were delicious including the scallops and scamp bisque followed by succulent and tender lamb and veal steak. Friends tried the moderm macaroni truffles - squid also very yummy. All in all sitting outside on Terrace very enjoyable. Wine list high quality (but not cheap) - meal price not cheap but definitely reflects the food quality and service. Our groups best meal in Croatia. 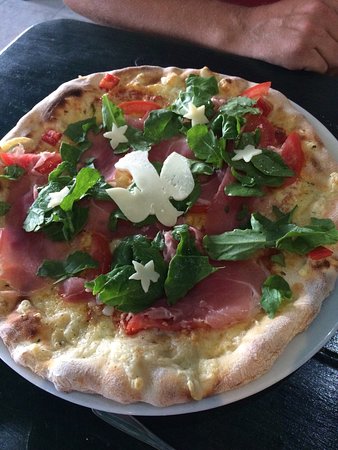 I have been many times in Vela Luka, but havent discovered Pizzeria Alfa before now, and now that i have im just really satisfied.. their pizza is GREAT and they also have other good dishes but the pizza is something special, remember to reserve a table becuse its almost full of people everyday! 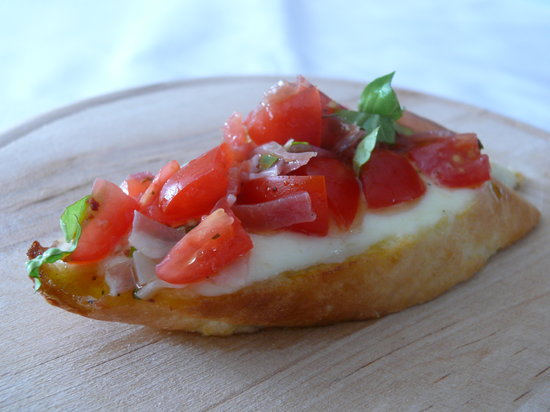 Great place to dine and enjoy the evening off after a hot day on the beach. Big Terrace with warm hospitality, enjoy the environment. Foods was good with reasonable pricing, would recommend this place for those who stop in Korcula island. 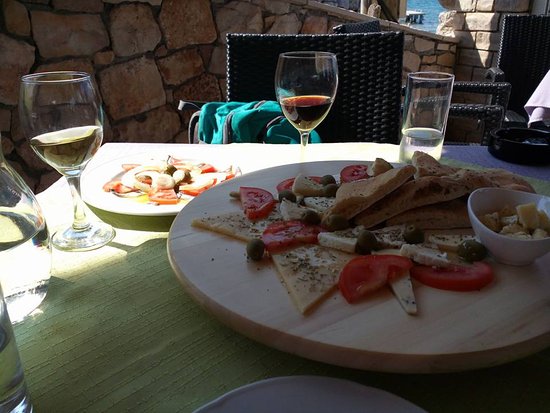 Firstly, the location is unrivalled and absolutely stunning! We ate here twice during our stay in Korcula, the food is beautiful, the service on point but that view! That stunning view. I would definitely return here again if visiting Korcula in the future. Highly recommend. 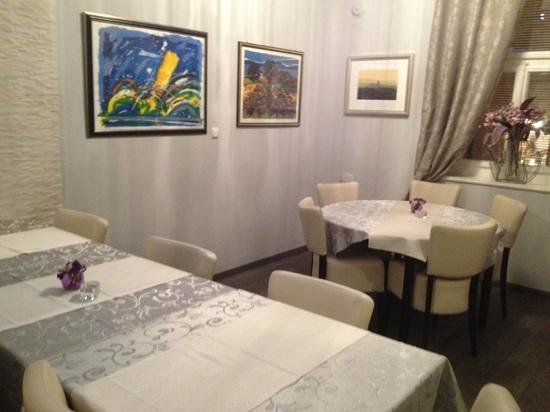 We had a great meal at this unusual place. We sat at the window and enjoyed the breeze. A great selection of seafood but we started with a selection of anchovies, cheeses, olives and salad.
We enjoyed the whole dining experience and especially appreciated the friendly service from the young guy serving and the local version of grappa at the end of the meal. 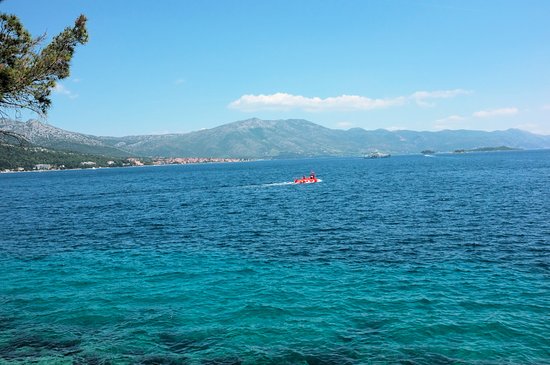 This was the most expensive meal we ate in Korcula, but worth every Kuna.
The menu was limited, but excelled in quality. I had the tasty vegetarian homemade pasta with truffle sauce and my partner enjoyed his pasta with chicken.
The Deserts were also delicious. I opted for the trio which I'd recommend if you can't decide which of the puddings to have.
I'd suggest booking in advance as it seems to be a popular place to eat. 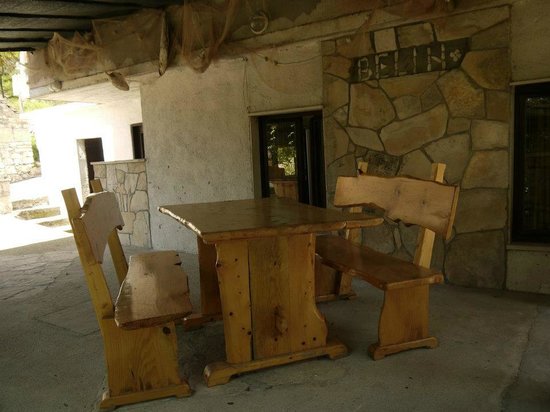 Konoba Belin is quiet domestic restaurant in Zrnovo village offering home made food and vegetables,fresh fish and meat from grill, halfboard and rooms ,home made wines in a pleasant family atmosphere, working from 01.05 Till 01.10 Every year and every day from 18-24. Our guests are on the first place, all other things on a second. We are here to serve you.The restaurant is 4 km away from Korcula town, on the Zrnovo village entrance, 50 meters off the road, just folow the BELIN sign. Also if you have problem to find us or to come to us please call us and we will pick you up Also we can arange meals and all sorts of partys for bigger groups up till 90 persons.YOU DONT HAVE A CAR WE WILL BE YOUR CAR :)))) NO CREDIT CARDS. WE ARE CLOSED FROM 30.09 TILL 01.05 EVERY YEAR

We were taken here as part of our Sail Croatia cruise and it was a delight for dinner. A wonderful host who greeted us with nice grappa and figs. We had a delicious local dinner and would definitely recommend the restaurant to anyone. A highlight of our trip 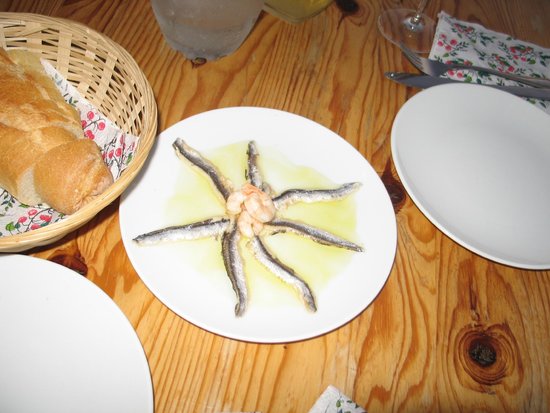 Don't let anyone tell you this place is overpriced! I've seen that on a few reviews for restaurants in Croatia. Truth is, eating out in Croatia is often a tad more expensive that some EU countries. But let's compare apples with apples. Gavuni charges the standard going rate for Croatian restaurants, and top it off with great food and great service.
We anchored in the Lumbarda Bay and were drawn to Gavuni due to its wonderful location right on the water's edge. It's not a big place, and the homely atmosphere, chunky wooden furniture and smell of a wood fire lured us in.
Right from the start, the service was friendly and helpful. It is a family operated business, which almost always guarantee a good grade of customer service and a personal touch.
We could not fault any of our food - full marks on speed of preparation, presentation, and most importantly, taste.
The Dalmatian ham and cheese platter, with a generous side helping of fresh bread, was almost a meal in its own.
Our waiter presented a decent selection of fresh fish on a platter - caught on that day - from which to choose one for grilling (priced per kilogram). We went with the black scorpion fish, new to us, and enjoyed its mild but pleasant taste. Having your fish grilled on coals of a wood fire of course adds an extra dimension, and it would be hard to go wrong with any choice of fish. Grilled veg and crisp potato slices on the edge complemented the fish well.
Also be sure to sample the wines produced on this island of Korcula. It's an island with a rich history in viticulture, boasting its own specific varieties. Ask your waiter at Gavuni to recommend nearby wineries to visit.
A lovely gem of a restaurant - be sure to try it out!