Tegernsee is a town in the Miesbach district of Bavaria, Germany. It is located on the shore of Lake Tegernsee, at an elevation of 747 m (2,451 ft) above sea level.
Things to do in Tegernsee 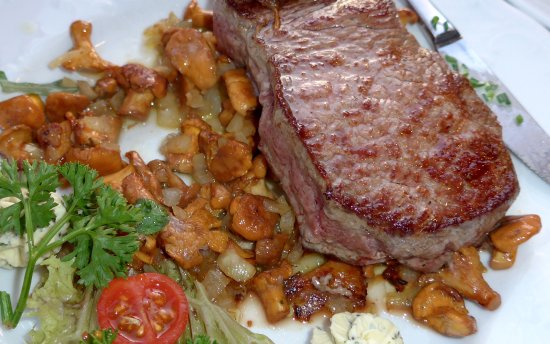 High up on the mountainside with stunning views over Lake Tegernsee is this authentic Alpine restaurant with great local food and excellent friendly service
The restaurant had been recommended to us by German visitors who were regulars in the region and we were certainly not disappointed. So much so that we had lunch there one day, sitting outside in brilliant Sunshine whilst admiring the view and dinner there two nights later in heavy rain, sitting inside and enjoying the cosy, Bavarian dining room. The food was delicious with enormous portions. The shredded pancake with cinnamon and apple sauce is a must! The value was excellent.
Do not be fobbed off by their initial adverse reaction to any visitors other than Germans. There are very few foreign visitors in this region as the German people have kept this area a closely guarded secret. Nevertheless, everyone that we have come across has been exceptionally friendly and helpful, regardless of our inadequacies with the German language.
Highly recommended 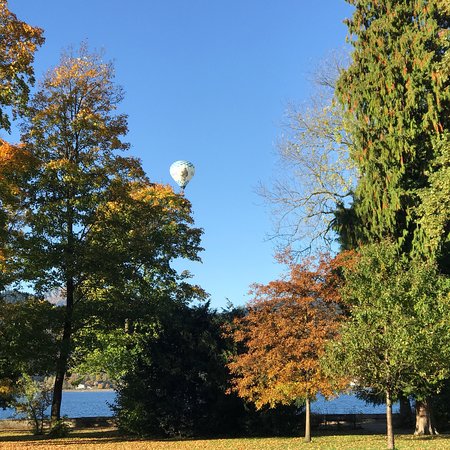 The Benedictine monastery of Tegernsee, which was founded in the year 746, provides the first indications of monasterial brewing. But the earliest date of which we can be certain is that found on the marble plaque on the wall between the pub table and bar in Braustuberl, which is there to this day. On it, in old German text, reads: "The monastery brewery of Tegernsee obtained electoral license for the sale of beer on 22 Feb 1675". This was the date of the official birth of Tegernsee Braustuberl. With the dissolution of the monastery in 1803, Tegernsee was very different. The state seized ownership of the entire monastery. The monastery church became a normal parish church. The monks disappeared. But the lucrative brewery and Braustuberl continued to run. This was the &apos;fault&apos; of the first Bavarian king. Or to be more precise, his wife. Queen Friderike Wilhelmine Caroline, it is said, fell in love with the valley by the lake and persuaded Max I. Joseph to buy it. From 1817, the grand couple converted the former monastery complex into a royal summer residence, which heralded the start of the beginning of tourism in Tegernsee. The old monastery brewery became &apos;Koniglich Braunen Brauhaus Tegernsee&apos; - and King Max I. Joseph became the first in what is now five generations of a full line of Wittelsbach brewing men, and not to forget the Queen Dowager Friderike Caroline who also made a more than competent lady brewer. It has remained in Wittelsbach hands, passed down through the family, and today goes by the name &apos;Herzoglich Bayerisches Brauhaus Tegernsee&apos;. It has been owned by Duke Max in Bavaria since 1968 and his daughter Anna is now managing the brewery.

I had been the year before in glorious weather and was so impressed I wanted to show my husband. The weather was anything but glorious, rain tipping down. Still the large outdoor area under heated awnings was reasonably busy on a Wednesday lunchtime. But once...MoreDear qub47, thanks for your great review and your visit! We hope to welcome you soon again and wish you all the best till then! Best regards from Bräustüberl!

The restaurant looks quite nice. We ordered drinks (very expensive) and when we were ready to order the waiter was very unhelpful and rude. In view of his behavior we decided to pay for the drinks and leave as we can't tolerate this kind of attitude anywhere and certainly not in a rather expensive restaurant. When we paid, the waiter was even more rude and he actually went to a table with customers and had the nerve to complain, gesticulating in all directions.
Another man, whether a manager or the owner came to apologize but that was too little too late and such waiters should be dismissed.
We will definitely ensure that noone we know goes to this restaurant.
Following this can't comment on the food! 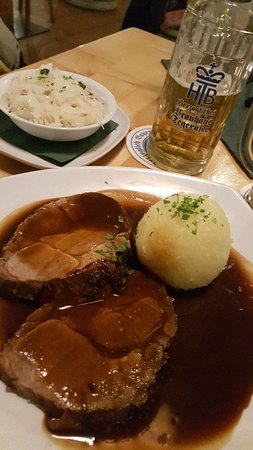 Me and my girl went there 3 times out of 4 !!
That says it all...
The food is SO fresh and good, or as my girl calls it: heartwarming, the service is impeccable and super friendly and the atmosphere is just right, not too dark, not too bright, not too noisy, just very pleasant, no outside Seating though !!
We had fish, chicken curry, schnitzel, kaesspaetzle, all excellent quality, side salads very fresh and tasty dressing and CHEAP ( mains are 8 EUR to 12 EUR )
I can highly recommend this place !!
Be aware, they take NO orders after 9pm, so don't go too late !!
One of our friends came late from Berlin one evening, so we had to eat at the POST across the street, paid double for half the quality ;)
Enjoy this place it is really worth it 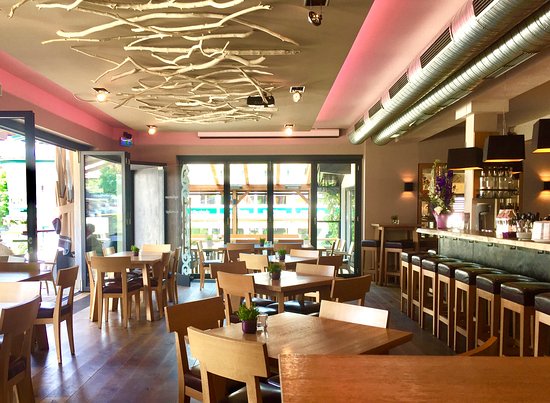 We had cappuccino and cakes here. The cakes were really good and the coffee as well. 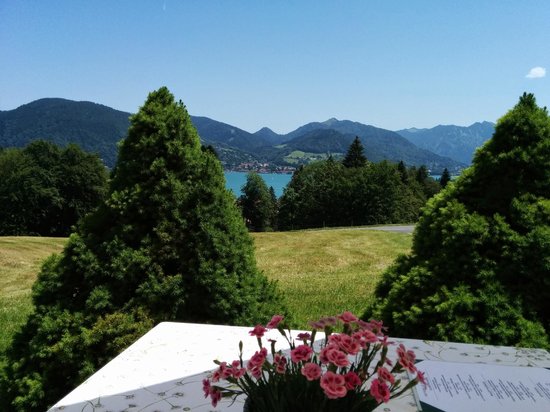 Anyone who has been a guest house in the open burner, knows that it is up here especially nice with us. Whether for a snack, dinner or a lavish celebration: You can expect treat! Because our kitchen to indulge in the best white and our service team is always happy to help. As our guest rooms are so inviting and the view from our patio on the Tegernsee always enthusiastic. And because you will feel at any time personally welcome. "The best motivation is to make our guests feel at home."

I go here since nearly 20 years. Quality constant and always above average, but never brilliant. A lot of old fashioned dishes on the menu like Kalbshaxe and Forelle Blau.
Very lovely view over the lake.
Not suitable for socially insecure visitors. The typical customers are social upstarts with black Cayennes, and she wearing a LV bag, or shabby-looking old rich. 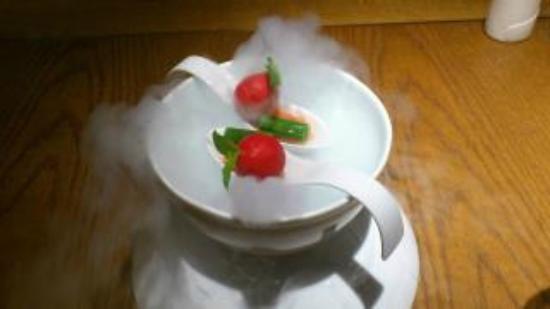 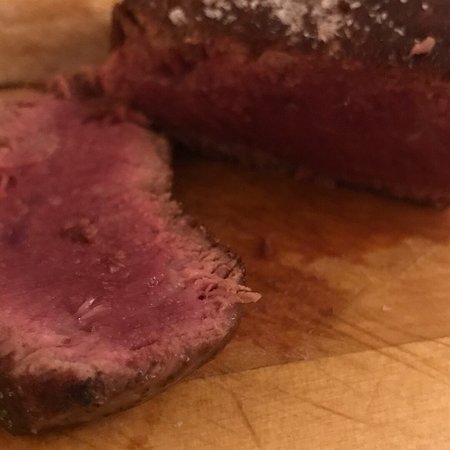 Food quality was good but I found the service very irritating - the waiter who served us first ignored us after some point entirely and his female colleague continued with the service. It may have been a language thing? Maybe he didn't feel comfortable speaking English? In any case it made us feel uncomfortable. 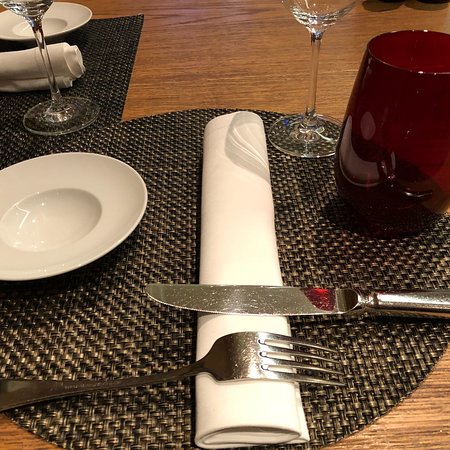 Benvenuto (welcome) to the Italian side of the Tegernsee! The ?Il Barcaiolo? restaurant celebrates ?cucina casalinga? their Renaissance - and places the best Italian housewife recipes at the core of exceptional fine dining. With just the right wine, fine starters, first courses and second courses, or sweet delicacies, you can enjoy the relaxing atmosphere of this place. The ?Il Barcaiolo? restaurant welcomes its guests with sincere, amiable and, most importantly, authentic and diverse culinary delights from the most well known Italian regions. Buon Appetito! Enjoy your meal!

We had dinner in the restaurant during our stay in the hotel.
The food is very nice italian food starting with a nice bread platter with foccacia, sausage and olives. Minestrone and panzanella were very tasty as starters followed by nice home made pasta.
Only drawback seems to be how they deal with Reservations. We had to be there at 18.30 to get a table but the restaurant stayed empty for quite some while. People came in without a reservation and the ones they knew seem to still get a table. Others not. 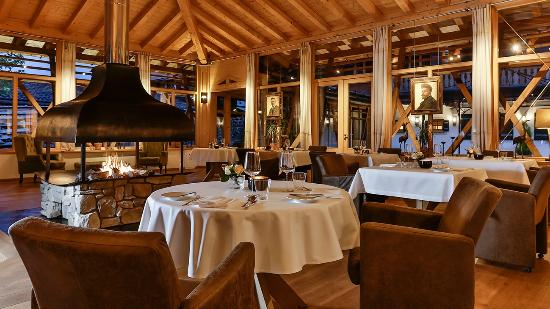 Whether you opt for fine dining in the Dichterstub&apos;n, or friendly waitress service in the Hubertusstuberl - in the Egerner Hofen in Rottach-Egern, Lake Tegernsee, everyone is welcomed with equally fine culinary delights. The Dichterstub&apos;n is a hommage to Rottach-Egern&apos;s Literary past. It is not only connoisseurs who enjoy the food here at the Dichter and Schriftsteller, but also anyone who enjoys fine dining, is served from the artists working in our kitchen, who have been awarded a Michelin Star for their gourmet delicacies. Under the instruction of the two head chef Michael Fell, the team prepares regional creations of the highest level. On the menu, for example, you will find trout fillet on tossed savoy cabbage, and potato puree, slices of sirloin in shallot sauce with grilled potatoes, or sliced curd cheese with apricots and raspberry sorbet. The Hubertusstuberl stands for all that is fine, in traditional Bavarian hostelries. You will also find hearty regional dishes served here.

the food was fantastic from beginning to end. the 'landei' is a fabulous appetizer, the veal two ways as well, especially the braised calf cheek (to die for). wine selection very good, recommendations of waiter not as good as they could have been; i know a fair amount about wine, though am not a true expert, but i knew more than he did, which should not be the case at these prices. he also came by far too often and talked far too much.
it's a lovely drive to the Tegernsee, perhaps germany's most beautiful lake. the hotel is close to the lake, but there's no view, at least not from the dichterstube, which has no windows, but rather walls covered with low-quality portraits of lesser known german poets (thus 'poet's room').