Sfakiá (Greek: Σφακιά) is a mountainous area in the southwestern part of the island of Crete, in the Chania regional unit. It is considered to be one of the few places in Greece that have never been fully occupied by foreign powers. With a 2011 census population of 1,889 inhabitants living on a land area of 467.589 km (180.537 sq mi), Sfakia is one of the largest and least densely populated municipalities on the island of Crete. The etymology of its name is disputed. According to the prevailing theory, it relates to its rugged terrain, deriving from the ancient Greek word σφαξ, meaning land chasm or gorge.
Things to do in Sfakia 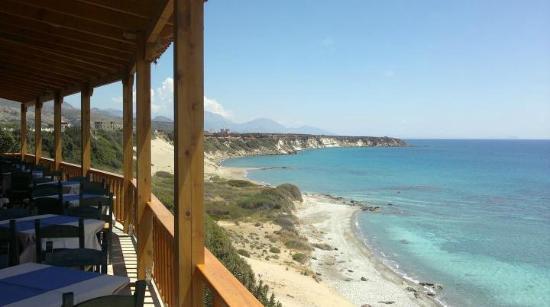 .confusing drinks menu with no size or price for beer and no receipt given.
4 euros for 400 ml of beer is crazy.
Was going back to eat here but no way now.
I can get better beer for 2.50 euros for 500 ml
Dont rip tourists off...
It's bad for business.
Don't use the blue sunbeds either owned by the same business. 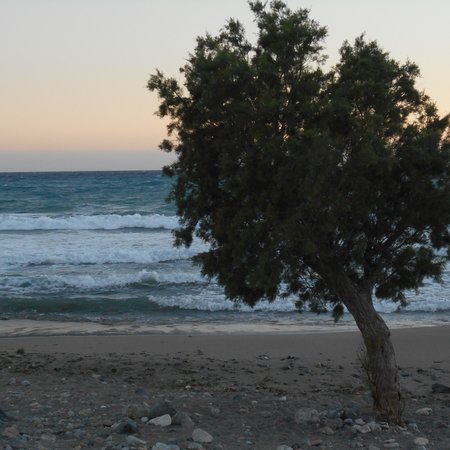 We were staying in Vamos and enjoyed the lovely drive over the Mountains to visit Frangokastello Beach. We discovered this lovely taverna 2 years ago and so were keen to visit again. We wasn't disappointed, the food was lovely, fresh and good sized portions. The stuffed vine leaves, stuffed tomatoes and small fish were all excellent. The taverna was lovely and clean and the owner serving was helpful and friendly. We only ate here for lunch as we had quite a journey back to our villa, shame. 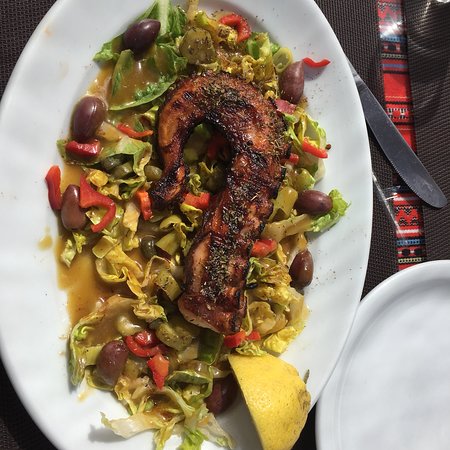 Reviewed By Rūta A - Vilnius, Lithuania

We have been visited this many times before and it is still the best! Garlic bread is best we have ever tried, also that spaghetti with tomato sauce. And cheese croquettes!! And stuffed wine leaves. And greek salad. Everything was perfect. Nikos and his family are the best. We hope to come back, it was very very good. There was 2 dinner at this taverna this year and we were not able to finish our food neither the first evening or secound so they packed this for us. Really huge portions! 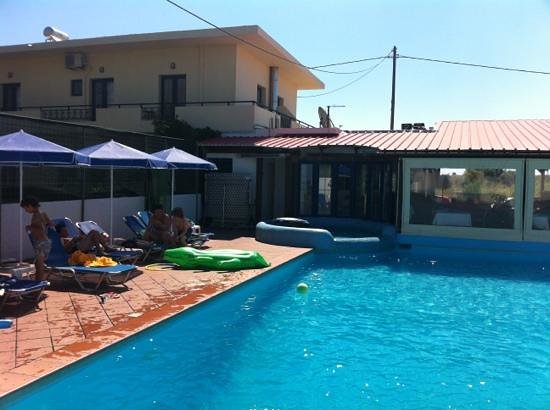 This family-run taverna is well worth visiting. It has a good varied menu of local dishes. I particularly enjoyed the chicken in figs. The second time we went, it was very full, a sign of its popularity, though it made service a bit slower. 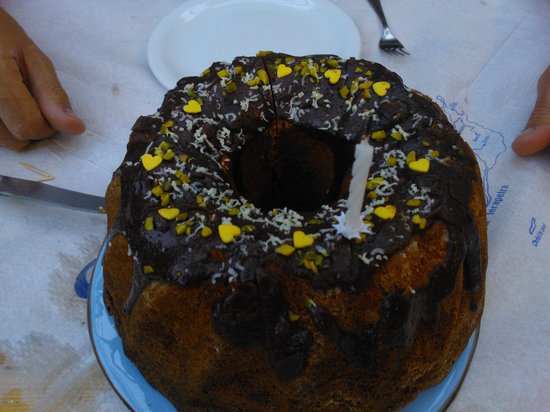 The food is good average taverna fare: nothing very special and not specially well cooked. Is it rather resting on last laurels? 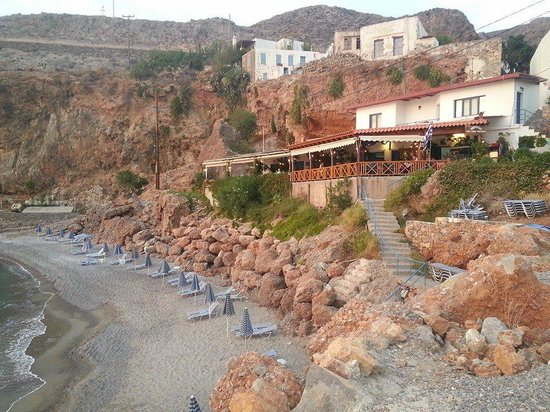 Came for dinner, had a plate of spaghetti vongole 16 euro. Beautiful flavours, we shared it. The clams were large and alittle tough. Served by an older gentleman who seemed a bit grumpy. Mama we saw hovering around in the kitchen. Directly above the beach, sounds of the surf rolling in. No internet they only take cash. Recommended. Huge menu, free fruit and raki at the end of the meal. 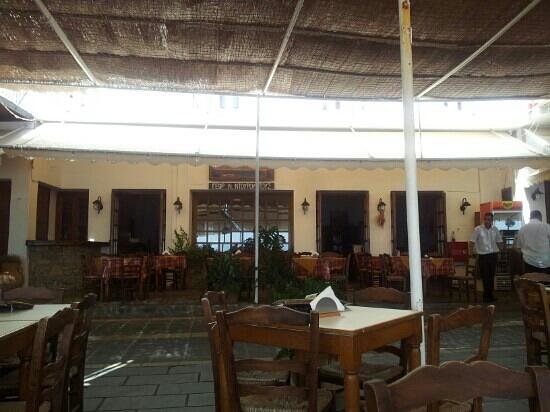 In the heart of Sfakia, the most traditional region of Crete, we have been providing hospitality for almost 30 years. Welcome to Samaria Livikon Hotel & Restaurant offers an exquisite seaside restaurant for your breakfast, lunch and dinner. The menu consists of a full palette of local Sfakian and traditional Cretan dishes, and international cuisine. All is freshly prepared by our staff in our modern and professional restaurant kitchen. You can eat outdoors on our shady Terrace with full sea view, or indoors. Our friendly staff speaks Greek, English, German, French, and Russian, and can help you with choosing your meal. We also serve a selection of local Cretan wines, draft beers and many other beverages, and fresh Sfakian pastries. Our hotel and restaurant have many guests and groups that are visiting the hotel year after year, of which the staff is very proud.

Came for dinner only 10% of the tables occupied yet service was quite slow and not that welcoming or friendly; had a Cretan salad which had cheese, dried figs, lettuce and pomegranates; and mussels cooked in tomatoes peppers and cheese sauce (tasty). Followed by 4 scoops of assorted ice cream- a soda and 2 glasses of white wine, the bill came to 32 euros. Nice table overlooking the beach with the sound of the waves crashing on the beach. 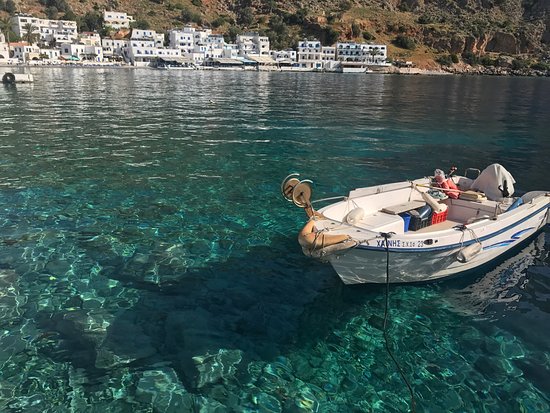 This lovely restaurant is in the beautiful village of loutro with stunning sea views. The food is delicious with the calamari being the best in the village. The food is pre cooked and is in chilled cabinets on display (this is usual at some restaurants in loutro). George is a fantastic host. Well worth a visit. I had the meat balls which were delicious. 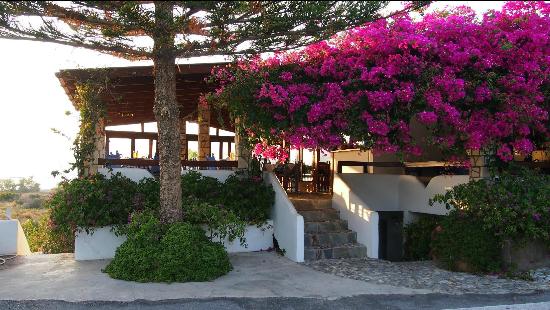 It wasn’t immediately clear why the tavern got its name from until we sat down at our table and looked to the west as the sun set. The scorching August evening revealed a green area that clearly benefits from abundant groundwater running from the nearby gorges. The food was outstanding – a fabulous green salad with figs and a baked tuna dish. Couldn’t fault the place, just a splendid location and food. 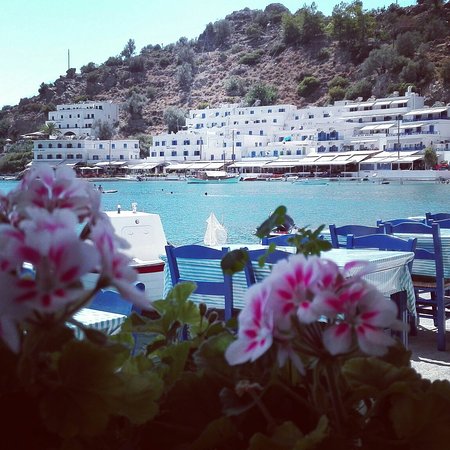 Delicious food, incredibly helpful and friendly service in this brilliantly located taverna on the beach in the middle of the bay. Lovely atmosphere. We had lunch and dinner here and returned next day for breakfast. The cooked dishes were all fresh and wonderful and their grilled lamb chops were superb. Cannot recommend highly enough. Thank you to all the great staff there.