Top Restaurants in Province of Terni

Top Attractions in Province of Terni

The Province of Terni (Italian: Provincia di Terni) is the smaller of the two provinces in the Umbria region of Italy, comprising one-third of both the area and population of the region. Its capital is the city of Terni. The province came into being in 1927, when it was carved out of the original unitary province of Umbria.
Things to do in Province of Terni This is a fine dining restaurant. Food delicious, my first experience of truffles, the homemade pasta with truffles beyond delicious. Scallops, rabbit, all yummy. Wine very good too. Service charming, efficient and attentive without being intrusive, perfect! So many restaurants get that balance wrong. A restaurant of this quality would have been far more expensive in the UK so good value for money too. 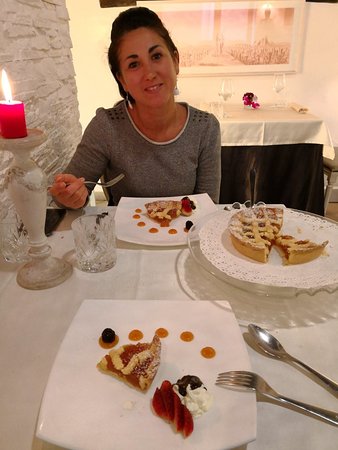 Beautiful food, we have the antipasti platter, truffle pasta, vegetarian salad and the duck breast for dinner, the platter was amazing with lots of local meats and cheeses, plenty of fresh truffle grated over pasta, duck beast was cooked beautifully and the vegetarian salad with tomato and buffalo mozzarella was divine. Not much English spoken but we managed to get by, great atmosphere and friendly staff. Reviewed By Gianluca B - Foligno, Italy

Thank you Maurizio and Mauro for organizing this beautiful event at your place! What a wonderful time to donate money in favour of this precious research for Neuroblastoma cancer of children and infants...
Food was great as always, thank you for everybody's generosity!
Thank you very much to all the sponsors: L'Ulivo in primis and then la Cantina di Monte Vibiano Vecchio, Beddini, Il Tartufo di Paolo.
Also a special thank you to Andrea Paris, who offered his exhibition and entartained all the guests with his magic tricks.
Wonderful dinner and wonderful atmosphere!!! When my friends from Terni told me we were going to Labro for a meal in their favorite restaurant I was curious - Labro is a small village on a hill...what possibly could be there?
Possibly the most amazing food and restaurant in Umbria!
Mauro was so very lovely and his food - DELICIOUS and MOUTH WATERING! The ambiance of the quaint restaurant was so cozy and inviting.
It was a remarkable experience. I shall return there the next time I'm in Terni, no doubt! 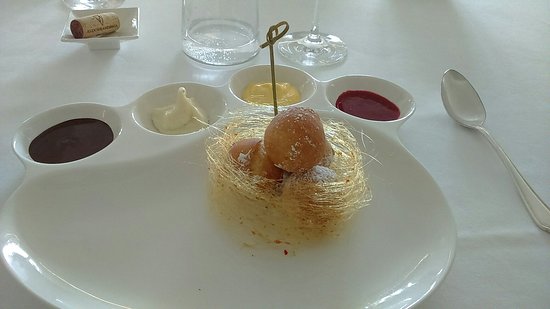 It has been a long time ago since I was at a restaurant with two Michelin stars but it was well worth the money. It is clear that the Trip advisor rating system can't apply to this high category of restaurants so don't compare it with my other ratings. I have added some photo's to give an impression since it is hard to describe the highly creative quality of this restaurant. Special compliments for the very friendly service and not too formal ambience. My favorite was probably the stuffed artichoke which got them a price in 2011, the egg inside that is still liquid is a good combination with the crusty outside. They are renowned for their fresh water fish dishes, as a main dish we had pike from the lake and that was excellent. 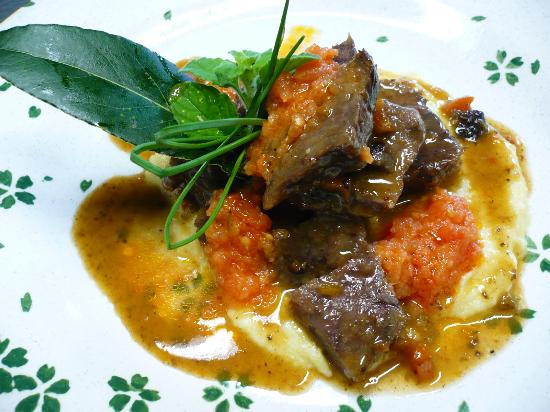 Our meal was of great quality in terms of food: in the taste, the presentation, the originality. However, our meal was ruined by the extremely slow service and the fact that a small plate of tortellini "in bianco" (oil and cheese) for my child was charged 20 euro. I would not suggest this place to anybody with children. 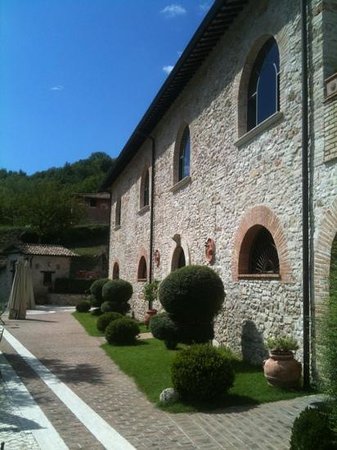 We love this place. Just outside Rieti close to Contigliano and the sanctuaries of St. Francis of Assisi. The owners are lovely, considerate - they want to ensure the most pleasant dining experience for you. Elegant ambiance & structure. Service impeccable. Restaurant gets especially booked up at weekends & holidays. There isn't a view a such but the setting is very pleasant and tranquil.
Cuisine is typical of Lazio and especially typical of the province of Rieti but prepared creatively. Menu is only in Italian and staff don't really speak English but everything is so good here whatever you choose will be delicious! Always been satisfied with the wines too and our favourite dessert here is the port mulled fruit inside a caramelized suagr basket - large enough for 2 people to share, in our opinion!
We were here in Sept 2012 (evening dinner) and again in Dec 2012 (lunch) - all nicely decorated ready for Christmas. There is a small bar area where you can try the local grappa after your meal.
Definitely returning! 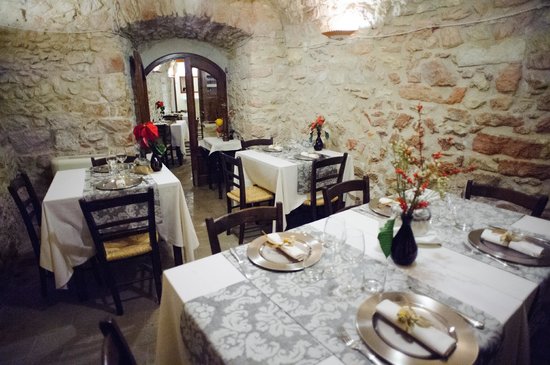 We came to dine at this special restaurant on the recommendation of an Italian guide book updated in 2015. It considers this restaurant is one of the best 10 restaurants to try in Italy in 2015. We came with the high expectation and left with total satisfaction. The welcoming little antipasti (different kinds of local cheeses, pizzas and bruschetta with prosciutto) were delicious and beautifully presented. We ordered 3 different antipasti, ranging from the 6 years old aged prosciutto from Umbria that was sweet and not dried out, to delicate and light eggplant parmigiana to a creamy baked egg with foie gras and truffle. The creaminess texture was the result of the long low temperature cooking at 60 C for an hour. I appreciate the texture and innovative approach though I did not really taste any foie gras. The home made pasta wild asparagus was one of the best pasta that I've ever had anywhere. The texture of the pasta made with grano duro and egg white was firm with a bite to it. We ordered four different desserts and every one was excellent but I have to say that the gelato of pastiera blew my mind away. It is created based on the traditional Pastiera Napolitana filling, but instead baked in a tart form, it's made into gelato. What a great creation. If anything to be less than perfect, it was the main course (turkey breast roll filled with foie gras). The owners/chefs are passionate about the quality of their ingredients and it definitely reflects in their food.
In addition, we ate on the Terrace with beautiful view. It was as though we were dining in a private garden. The service was warm and attentive. They did so many little things to enhance our dining experience. For example, two of us ordered the pasta dish (primi) and two of us did not. While they brought out the primi, they also brought a small taste for the two who did not order the pasta so that we did not just watch the other two eating.
Oh, don't miss checking out their restroom. Even the small aspect demonstrates their attention to details. 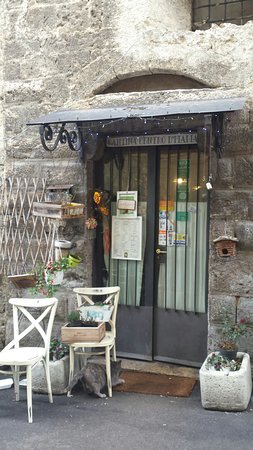 Lovely restaurant serving delicious food at a fair price. The ingredients are high quality and it shows. Excellent, friendly, knowledgable service. The antipasti are fantastic, the pasta - homemade,of course, is very tasty. We will definitely return. 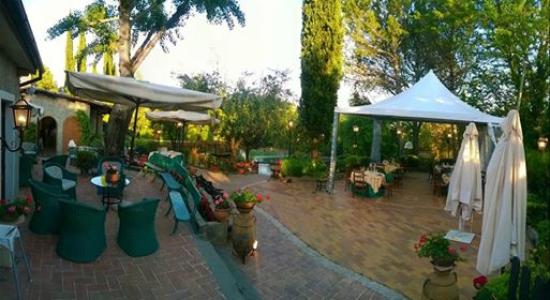 In a warm environment and welcoming, the restaurant " La Casina nel Parco", offers fresh products, presenting them in simple preparations and tasty.The Casina nel Parco is certainly the ideal location for excursions and for romantic dinner by candle light.

Nice countryside setting, good service, excellent food - order carefully: we each had antipasta, HALF portion of pasta, main course and still weren't able to finish - way too much food. Menu choices make a change; most restaurants in the area tend to serve very similar food); there are several separate dining rooms and in Summer an outside area. Definitely recommend, particularly in Summer for eating outside. Both times we've been in Winter/eaten inside - noisy with small children running around despite it being late in the evening.