Lincoln is a town in Grafton County, New Hampshire, United States. It is the second-largest town by area in New Hampshire. The population was 1,662 at the 2010 census. The town is home to the New Hampshire Highland Games and to a portion of Franconia Notch State Park. Set in the White Mountains, large portions of the town are within the White Mountain National Forest. The Appalachian Trail crosses in the northeast. Lincoln is the location of the Loon Mountain ski resort and associated recreation-centered development.
Things to do in Lincoln 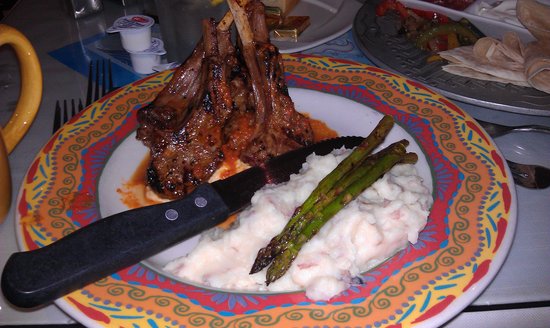 Food from around the world with a New England touch.

My daughter and I visited the Gypsy Cafe on Monday February 19th. It was extremely busy and service was slow. We order the Brussels spouts as an appetizer which was excellent. We order chicken Souvlaki and Falafel. Food was excellent. I highly recommend Gypsy Cafe, but don’t visit on a holiday weekend! Was great for a quick breakfast bite before we hit cog railway. Counter service. Egg sandwiches, bagels and some pastries with coffee. Gluten free galore if you're looking for that. Line can get long. A few tables to eat at inside or out. 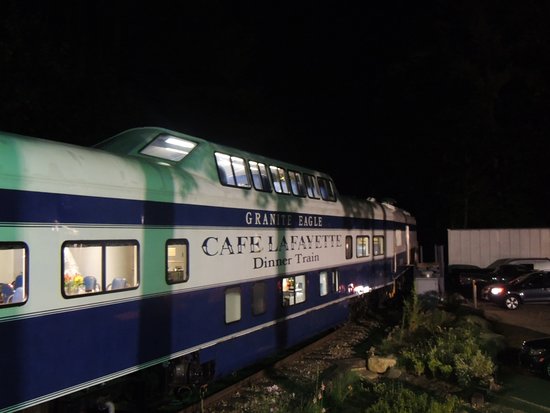 We've been on this before, so we knew what to expect...or so we thought...

Ali (one of the owners) will surely know who is writing this review, as my wife and I spoke with her twice about issues.

Things got off to a bit of a rocky start, as we were seated right next to the bar, and the initial activity as we were all seated at once didn't bode well, but the bartender told us it would get quiet after the initial rush, and he was correct.

We ordered our apps and meal, and that's when things started to go sour.

I got the apple, onion and brie crostini, which was good, though uninspired, and not very warm.

My wife got the mushroom ragout, which was overly salted. She mentioned that to the waitress, who said she'd "let them know". No offer to get her something else (which will come into play later).

Salads were fresh, but small. They were very tasty.

For my entree, I got the Roast rack of lamb. This was very good, thought the vegetables on both our plates seemed to have been under the heat lamp a little too long and were dried out.

My wife got the Eggplant Rolatini, which was just inedible. Sauce on top was slightly blackened and the eggplant itself was just a soggy mess. No texture and no taste, at least none worth tasting.

We wound up calling Ali over to talk about it, and then found out how happy they would have been to get my wife something else, which the staff should have offered as this happened, not after the plates were cleared.

We also mentioned to Ali that the 2 windows opposite us (behind the bar) were foggy because the seal between the 2 panes of glass must have failed, and it makes it almost impossible to see through. To which she replied essentially (this is not a direct quote) 'we know the windows are a problem, but no one has complained before and it would cost us over $300.00 each to replace them'. If you know they are a problem, repair them. And why do my wife and I care how much it will cost. We just paid $170.00 ($85 each) to sit at a table where we could not see out of one side of the train.

BTW, she said the train was completely sold out, however there was a 4 top in our car that was empty for the entire trip, so not so sold out.

No real apology from Ali, and shortly later we got the check. We certainly didn't expect to be comped the entire check, that would not have been reasonable, but some adjustment or consideration would have been appreciated, and given the issues and the poor food and handling of the issues (plural), appropriate. Nothing.

At $85.00 per person, this is not a cheap night out. It's a unique experience that we have enjoyed 3 or 4 times before, and always raved about it.

Perhaps now is the time to mention that this is the first time we've taken this train trip since Ally and Michael bought the business.

Anyway, to cap the whole evening off, my wife approached Ali quietly once we were back in the station to tell her we had not tipped the staff, her response "I know". No further apology, As it it were our fault that the food wasn't good and the service was not either.

Then Michael chimed in and almost shouted "Don't come Again". Great way to treat someone who has just dropped over $200.00 at your establishment.

No worries Michael, we won't... 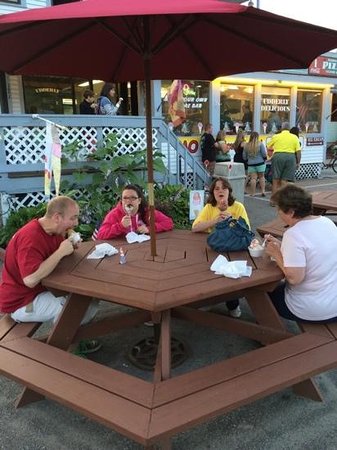 Was in the area over the weekend looking for some ice cream. Online it looked inviting and make your own sundaes! When we got there, ZERO parking. Place is on a corner, street signs say "no parking on street" and parking lot (4 SPACES) is confusing since it shares with a pizza place. We parked across the street in the Municipal Parking. Upon entering the menu was real confusing and no mention of how the sundae thing works. In fact the toppings for the sundaes were in the very front of the store in the sun with a can of whipped topping not being chilled. Toppings were all over the place. We decided to skip the sundaes and just get some scoops. First, most places we have been to when you get 1,2, or 3 scoops its generous scoops. I even worked at a place that gave generous scoops. NOT HERE! Almost portion controlled. I got two scoops that were very small. And then the price for kiddies! I decided to pay with my CC. The staff was so clueless they couldn't get the card to work? Its a tourist strip in the mountains and your CC can't work? We paid cash and left. Not impressed. Ice cream itself was so-so. No huge flavor. Reviewed By Becca A

Stopped in for a late lunch/early dinner with my husband and 2yo when we'd just gotten to town for a week. Great selection of high-quality meats, eggs, and dairy for sale, in addition to the delicious sandwiches Dan made to order. He even offered to make a simpler sandwich than the menu items for my son if needed. Our lunch was maybe a little more than some people might like to pay, but SO worth it for the taste and quality. Didn't try any of the cookies or other yummy-looking baked goods yet, but we'll be going there again. The produce from their farm wasn't ready, but Dan was also helpful in directing us elsewhere for fresh, local produce to stock our fridge for our stay. 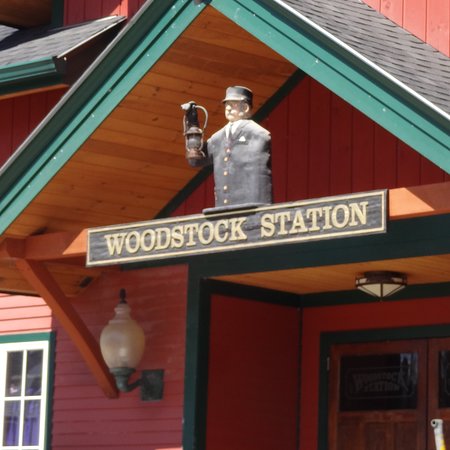 The Woodstock Inn, Station and Brewery is a North Country dining, entertainment and overnight destination. The dream began in 1983 as a Bed and Breakfast, and has since blossomed into a multiple award-winning Restaurant, Inn and decorated Craft Brewery. We are dedicated to providing exceptional and personalized service to all of our guests. We have 40 individually appointed guest rooms spanned across five unique buildings set amongst New Hampshire&apos;s scenic White Mountains. Serving breakfast, lunch and dinner our restaurant highlights the locally sourced ingredients obtained from our network of New Hampshire&apos;s distinct businesses, including our very own bakery, which produces Spent Grain Beer Bread from the brewery and homemade sticky buns to compliment every breakfast guest. Learn about the brewing process and sample some of our award winning brews everyday at noon. $9 includes a glass, tour and tasting. Sign up on a space available basis online! Or try a Brewer&apos;s Weekend (featured in Rachael Ray Magazine and the New York Times), where you can come learn how to brew beer in our unique microbrewery! Stay two nights which includes full country breakfast each morning, Friday night brewer&apos;s reception, lunch Saturday, Brewer&apos;s Dinner Saturday night, a commemorative T-shirt or Hat and learn the brewing process for the day (samples included). Enjoy the Great Taste, from our Special Place!!! Some of the wonderful New Hampshire made products we feature are from Fadden&apos;s Maple Syrup House Bonnie Brae Venison Farm Robie Farm PT Farms

We went here because we heard great things about the beer choices and varied menu and kid-friendly environment. So so disappointed. We waited for 1/2 hour, then were seated at a booth with table on the end for our party of 9- back to back...MoreWe are sorry for your poor experience Susie. It is our intention, even on the busiest of nights, to give inspired service and excellent food. Unfortunately, we dropped the ball that night. Please try us again to see why we are New Hampshire’s Premier Brewery! 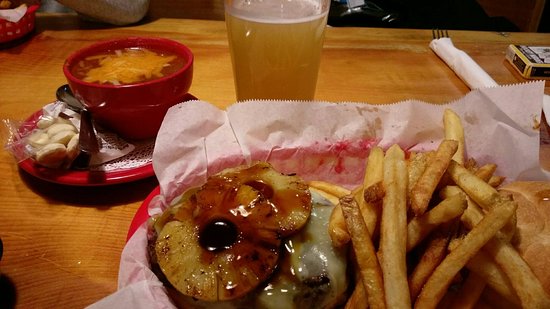 We take pride in our thick and juicy Black Angus burgers - grilled over an open flame - homemade soups & salads and other mouth-watering selections from our menu here at our Main Street location in Lincoln, New Hampshire. Compliment your meal with a brewskie or a freshly-made margarita from our full-service bar as well! Here from out-of-town and searching for a place to grab a meal? Come on by - we&apos;ll take good care of you!

Had lunch and was impressed with the food ordered and menu options. A true pub style restaurant with high tops and regular seating. Got a grilled chicken sandwich with fries both the quality and portions were above average. The waiter couldn't have been nicer or more attentive. Add it to your list of you are in the area. Admittedly the portion for a cone is generous. But this is it.
In my view this place is overrated. We experienced a lot of places with much better icecream than this.
Also to mention: a positive and friendly attitude with customers would be something to improve.
This was the first and the last time to stop by at this place. 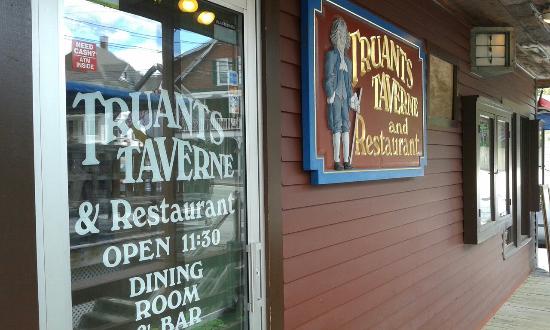 We had supper at Truant's. They had the fireplace going is was so nice. We had the French Dip Sandwich with french fries. The roast beef was so good. The sandwich was so delicious. The portions were great. My girlfriend had the broil haddock and her husband had the fish and chips. Every thing was great. Everything that I saw come out of the kitchen look delicious. Will go back when in the area. 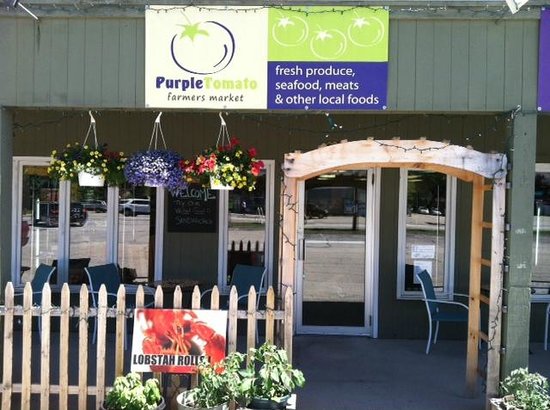 We&apos;re focused on offering & supporting locally produced foods including: fresh produce, local meats & cheeses, baked goods and lots of other yummy options from our onsite kitchen. We have lunch sandwiches made from local and organic ingredients including veggie and vegan options. We offer grab and go dinner options, lobster rolls and other fresh seafood choices all day.

We decided to have lunch here based on the recommendation of the woman at the visitor center. We expected a restaurant, not a small grocery store.

We ordered the lobster rolls since there is a large sign stating it was the best. I have to say, we were expecting more than we received.

The lobster roll was ok but definitely not the best, we have eaten much better in Maine and much cheaper. At $14.99 each we were disappointed that all you get is a roll with some lobster. It was very dry.

Since our hotel was in White River Junction we couldn’t take the sandwiches to go so we sat at a table outside while a car idled right in front of us, certainly didn’t make for an appetizing lunch.

If you don’t mind eating outside this is the place for you but if you want a real restaurant, don’t stop here.