Holladay is a city in Salt Lake County, Utah, United States. It is part of the Salt Lake City, Utah Metropolitan Statistical Area. The population was 26,472 at the 2010 census, a significant increase from 14,561 in 2000. The city was incorporated on November 29, 1999 as Holladay-Cottonwood, and the name was shortened to Holladay on December 14 of that year. It was reported in the 1990 census as the Holladay-Cottonwood CDP.
Things to do in Holladay 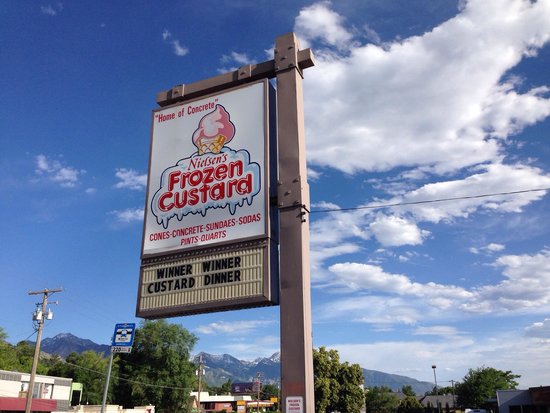 Seems a local favourite and very reasonable, queues of cars and people alike, we tried a few flavours including a concrete block with raspberry and strawberries and that was delicious, if you try a concrete block, 1 is enough for 2 even 3 people When I entered the restaurant, the host greeted me by name (I must have been the last reservation).

The decor is lovely and there is a big screen displaying the kitchen food preparation.

My waiter explained numerous items on the menu. The restaurant also had a small cocktail menu and I really enjoyed the lime-martini.

The beet appetizer was a work of art. It had a wonderful combination of flavors. The soup had a lot of complex flavors. My salmon entree was served with a miso sauce that was frothy. The salmon was tender and cooked to perfection. However it was fishy-tasting. I’m not sure if the restaurant got a bad supply that day or ??? I just figured it was a one-off. Fish is not the specialty here- meat is. The menu is eclectic. Foodies would love this restaurant.

My server was very attentive so I tipped him well. The host was waiting for me with my jacket on the way out. The staff made me feel like a VIP. 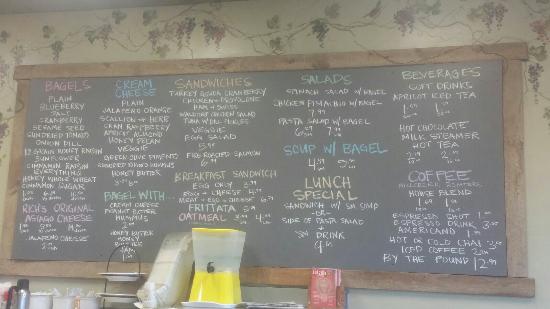 If only Rich's had later hours I could go for a bagel any time of the day! Enjoy the selection of bagels and cream cheese along with their coffee. Both Holladay and Sandy locations are great with efficient service and relaxing atmosphere. 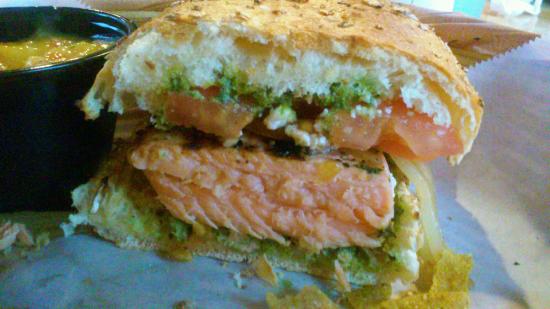 Their sign says gourmet Mediterranean and it is a cut above the typical neighborhood Mediterranean restaurant. There are Cous Cous dishes, pasta/noodles, flats (pizza), sandwiches and salads on the menu. I had their Chicken Cous Cous Carbonara and it was very flavorful and plentiful. You place your order, pay and take a number. I had barely gotten my drink, real silverware and found a seat when my meal was delivered to my table. Service and decor were both good. It is not far from my home and will be a spot I will go back too. 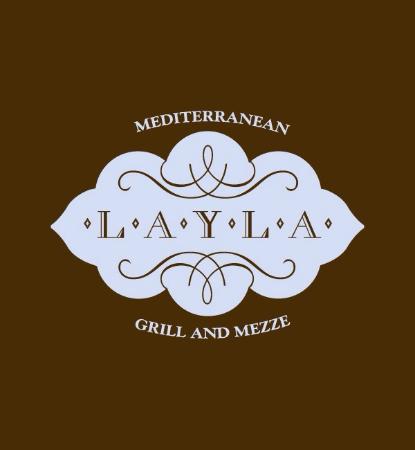 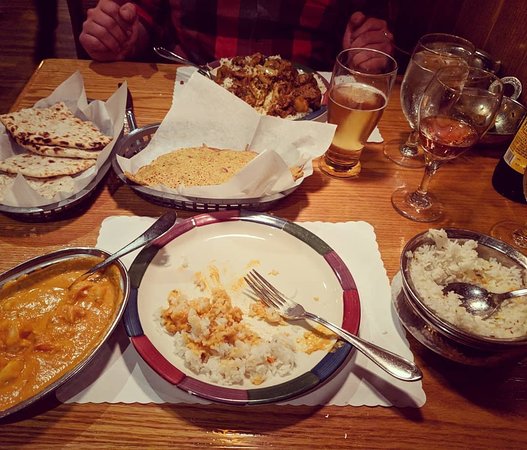 Eating at Bombay House is about much more than just food. It is a complete cultural submersion for all five of your senses. The rich aroma of exotic spices; the rhythms and songs of an ancient culture; warm, intimate lighting; vibrant murals portraying scenes from Indian life and legend; oven-toasted flat bread warming your fingers as you tear a piece to eat; the exquisite flavor of sumptuous food cooked to perfection and served with the same care and courtesy extended to family and guests of the highest honor. Bombay House is about providing you with a truly exceptional experience.

This Indian food restaurant has been in our city for many years. Their reputation has sustained as a quality provider of authentic ethnic cuisine. The ambiance is warm and decorated in a culturally consistent manner. The servers are pleasant and were willing to describe the large menu. The food was well presented . At our table the reactions ot the food varied from delicious to disappointing. This variance could be simply explained by individual taste and expectations. Overall,the group enjoyed the experience and would return again. 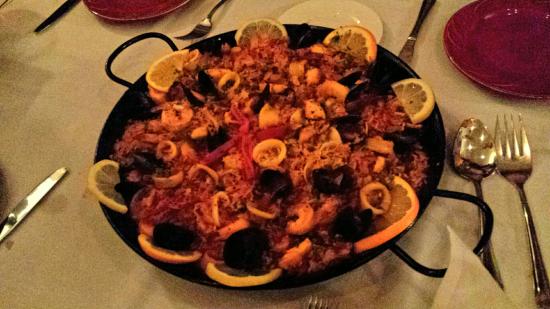 The concept of Cafe Madrid is hundreds of years old. Exceptional food and world class service blended into an intimate, charming environment, providing a rich and memorable dining experience. Imported from Spain, this concept has become a reality for the people in the Salt Lake area.

Reviewed By Cass B - Ajijic

We returned to Café Madrid, one of our favorite restaurants in SLC, with our son and his wife with high expectations...which were exceeded. We shared four tapas...all outstanding...and three of us had the paella special...which all raved about. I had the pan seared snapper with pasta and a sensational pesto sauce. We travel extensively and have dined in some of the world's top-rated restaurants. This dish was superior to any fish dish I have had from restaurants like le Bernardin or the French Laundry. Spectacular! As were the desserts, especially the chocolate mousse with orange meringue. Can't wait to go back. 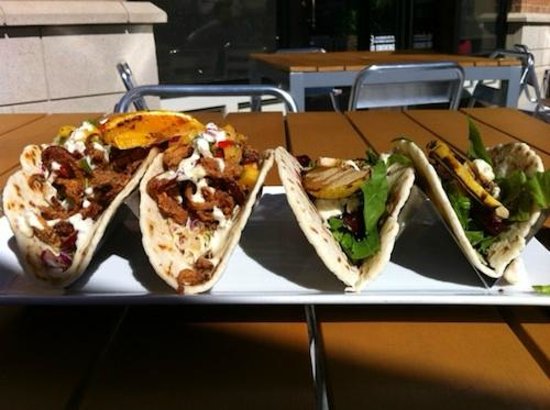 Tacos were good. I like the variety. We got the fish of the day, duck, and pork. Next time I'd get the shredded pork. I didn't care for the one we got compared with the other two. I'd say skip the guacamole too and just get salsa. They had a sign on the door proclaiming they had to raise the price of the guacamole due to an avacado shortage. I don't know where they buy their avocados but at the time they could have just gone to Reams and bought some for $.88 cause they had an abundance and they were the best avocados I've had all season. So that and the portion size made me feel ripped off. Our server was very nice though and when I thought about ordering the jalapeño beer she told me about the taster size for $.25 which was great cause it wasn't for me but I recommend you try it if you like beer. All in all I want to go back again and try other tacos and the dessert (it looked amazing). But if it's busy I probably wouldn't wait to eat here and try back another time. 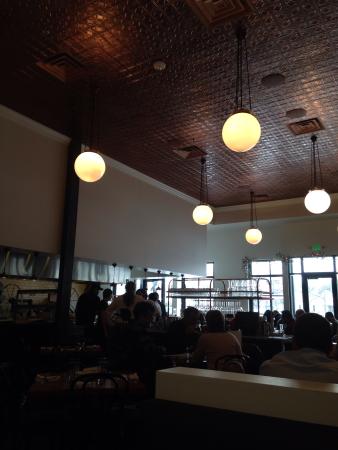 This location is near to home so when dining and drinking outside is wanted this is the choice. Service usually is very good. The menu tends to have some different pairings of foods which is fun to try. Sometimes I feel the menu could change more. Not much in the way vegan choices. They do have specials to mix it up a bit. 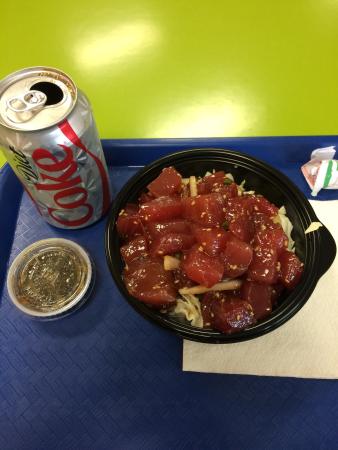 I was absolutely surprised to find this place. Granted there is a pretty big Polynesian population in this state, but a place that specializes in Poke is a bit out there. And it is not a side thing, it is pretty much the only thing they serve.

Love it though, these guys carry through and serve a very good, and true, form of Poke. I had my reservations about the place when we went there, but once I noticed they had Limu Poke I knew I had to try it.

The Poke is very good, flavors are done right and the owner is very concerned if you like the dish and what he can do to adjust it to make you happy. The variety of how the bowls are mixed is enough to give you an option at always trying something different.

The only two strikes I have for the place is that they don't have poi and it is too far from my house.