Ballyferriter (Irish: Baile an Fheirtéaraigh, meaning "Ferriter's townland", Irish pronunciation: [ˈbˠalʲənʲ ɛɾˠˈtʲeːɾˠiɡʲ] or An B[h]uailtín),), is a Gaeltacht village in County Kerry, Ireland. It is in the west of the Corca Dhuibhne (Dingle) peninsula and according to the 2002 census, about 75% of the town's population speak the Irish language on a daily basis. The village is named after the Norman-Irish Feiritéar family who settled in Ard na Caithne in the late medieval period and of whom the seventeenth-century poet and executed leader, Piaras Feiritéar, was a member. The older Irish name for the village An B[h]uailtín ("the little dairy place") is still used locally.
Things to do in Ballyferriter 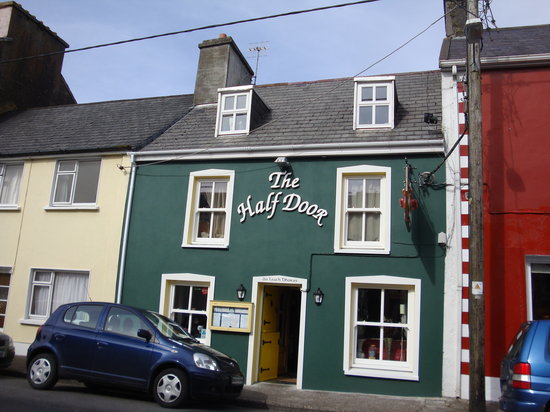 Prices are steep. Appetizers are at least Eu10, entrees are at least Eu30+ , desserts Eu8. I am a big seafood eater and have grown up with seafood. The best part of the meal was their chowder. The other dishes were ok... The chef at Out of the Blue is more creative and has a better palate. 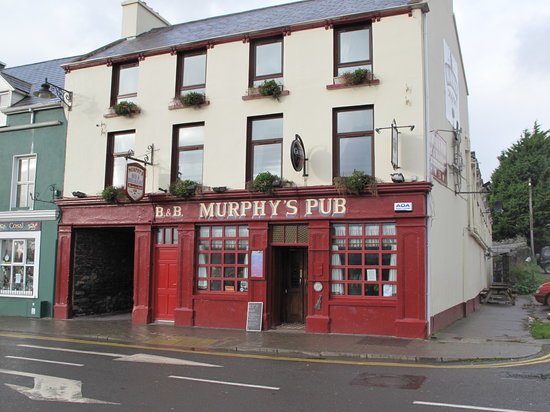 We stopped by here for dinner, I am a vegan. The menu doesn't offer many vegan options, which is perhaps something to think of next time menus and meals are being thought of and printed, but it has a whole section for vegetarians and on that, I found a nice red sauce pasta option that was suitable for vegans. For this reason, I didn't mention it to the staff, so I can't say whether more vegan meals could of been suggested to me from the chef, but I am sure they could have. The pasta dish was delicious and my 8 year old daughter loved her food too. The meal sizes were great and priced fairly too. We all left full and happy.
The staff are beyond friendly and one barmaid in particular made my daughter feel very special by how nice she was to her.
The establishment is that of traditntal Irish pub style and I doubt it has changed much over the years, but that's what I like about it and if you want and 'old Irish vibe' I would highly recommend here. 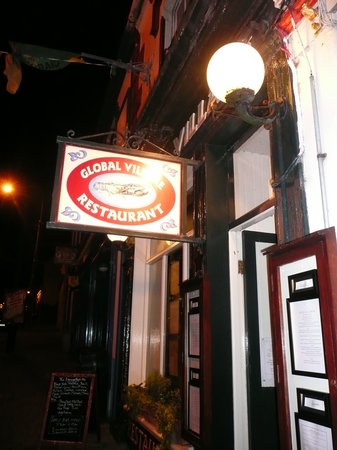 Modern methods, touched by tradition, bring the purest local ingredients to life in a harmony of taste and tone. The kitchen is the centre of our creation, bringing together the classic and the modern to craft the tastes of today. Our restaurant is warm, relaxed and welcoming.

Really enjoyed our meal in global village. We were a party of 6 and everyone was equally as happy...for starters we had crab, pigeon and duck croquette..all delicious....for main course we enjoyed the black sole, hake, beef and lamb...once again all equally as tasty and delicious. The food is refined, elegant and perfect portion sizes. Staff are lovely and knowledgable. Highly recommend eating here. 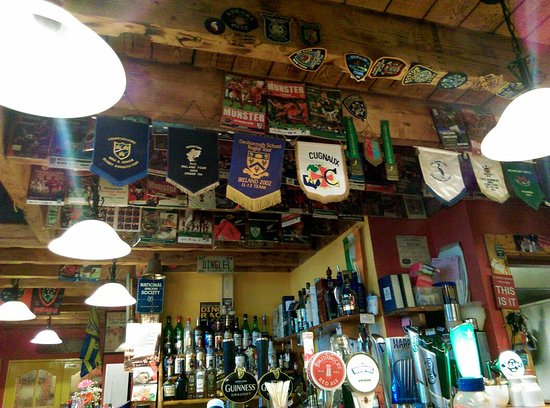 Ahh, here it trulyis, the taste and atmosphere of Dingle, Ireland! if you like trains, If you have watched the movie "Ryan's Daughter' you will find the absolutely delightful Danno as your effervescent and lively host! Danno, altar boy in the movie, is the fastest draw according to Kit Carson at the 1960's Dingle Carnival!! Challenge him to a rubber band draw at the Bridge in Midnight!!! The Restaurant.smell the peat fire, dine in a romantic Railroad atmosphere and enjoy one of Dingle's finest restaurants.! Always a Dingle favorite...made more so by Danno's personal Irish charm!! MMMH, MMMH! Great!!

5. Out of the Blue Seafood 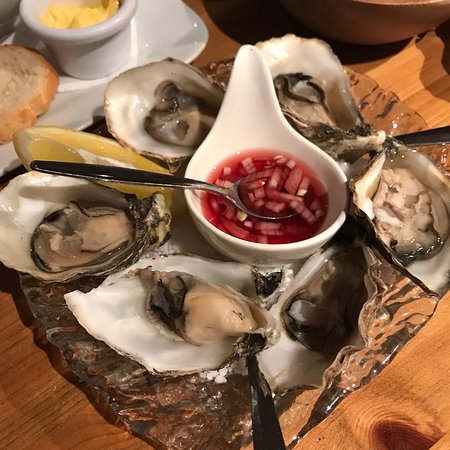 A Seafood Only Restaurant, perfectly situated on the harbour in Dingle. Pretty fine, interesting, colourful, fun and fresh dining for a Shack !

Excellent choice of fresh fish dishes served with a great range of supporting vegetables and side dishes. Both the hake main course, and the John Dory/turbot/scallops combined really hit the spot. The service & venue were both excellent and contributed to a great night out in Dingle Ashe&apos;s Bar & Seafood Restauarant, is owned & run by Thomas Ashe & Sinead Roche. The bar has been in the Ashe family for over 165 years. Using local fresh ingredients, Seafood & Lobster a speciality, we have created a menu to suit all appetites & price ranges. We serve lunch daily 12-3pm, & Dinner nightly 5.30-9.30. We offer a keenly priced early-bird menu, a kid&apos;s menu & an extensive a la carte. An Extensive wine list & local hand crafted beer, along with a full bar is also available. A must is our famous seafood chowder mentioned in many guide books, incl, Rick steve&apos;s, lonely planet, formmers to mention a few.

I actually didn't directly eat in this restaurant (my friend did and she said it was amazing) but I was very sick at this point in the trip and they were SO kind to me. We were staying in their apartments upstairs and they brought soup and bread up into my room, as well as a Hotty Toddy. I paid after, but I thought it was just the sweetest gesture. They really wanted to make sure I had everything I needed. They were so sweet and my friend said it was very good food so please go and support them! 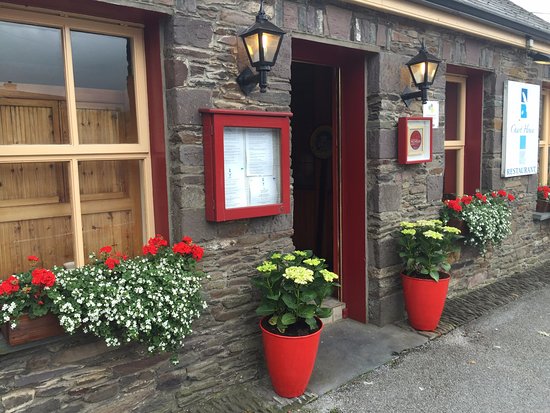 Recommended and booked by our Hotel, (Castlewood House). We had an excellent evening. Great choice of menu, Fantastic food. I recommend the tasting plate starter. We both had fish and it was excellent. The staff are lovely. Due to a back injury, I could not...MoreThank you for your review, delighted you enjoyed your evening with us and hopefully your back is on the mend Looking forward to welcoming you back Kind regards Jim Murphys Ice Cream is the flagship shop of this upscale Irish ice cream company. As well as an array of ice cream flavours, they serve delicious coffee and hot chocolate. Some of the flavours you might find are their world famous Dingle sea salt ice cream, Irish brown bread, Dingle Gin, and Irish rainwater sorbets, and many more.

Okay Dingle is a tourist spot but the price of this ice cream is ridiculous.If portions were more generous okay .Plus nothing offered for sugar free or even a special of the month ,,etc.....No kiddie cones for really small children.Ive been many places all over Europe where they offer great homemade ice creams but not at these prices and portions. 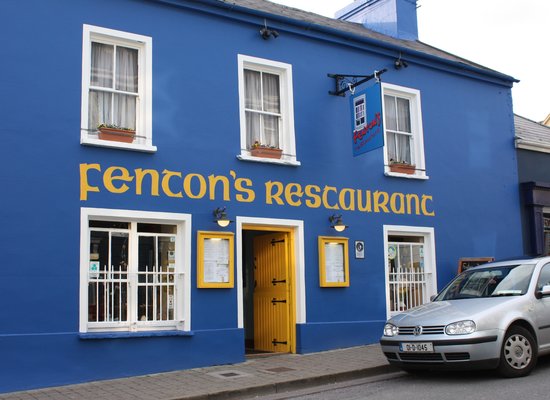 Myself and my friend just had an amazing dinner. I had the fish trio and she had the lamb, all of it accompanied with vegetables and potatoes.
The dessert menu had several choices which it was great to decided one one to chose.
The chardonnay wine was ideal with the dinner.
We don't have to forget how helpful the staff was with us, making sure at all the time our dinning experience was a 5*.
I recommend this restaurant to any foodies people. 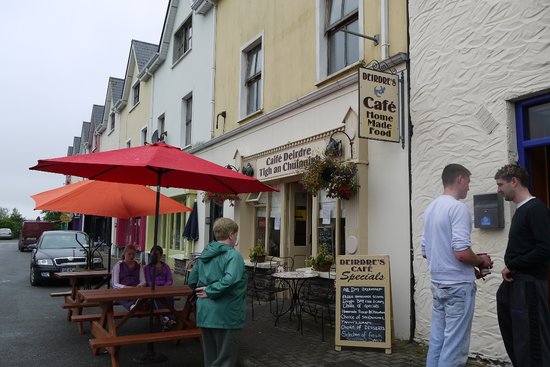 We went to Deirdra's three times for either breakfast or lunch during four days in Dingle after finding it by chance. The food was delicious--especially the seafood chowders, which were spectacular! The fish in the chowders was super-fresh as Deirdra's husband catches it the same day. One time we went, the restaurant wasn't busy until after we'd been eating awhile and Deirdra was able to chat for a bit, which we enjoyed a lot.