Arica (/əˈriːkə/ ə-REE-kə; Spanish: [aˈɾika]) is a commune and a port city with a population of 196,590 in the Arica Province of northern Chile's Arica y Parinacota Region. It is Chile's northernmost city, being located only 18 km (11 mi) south of the border with Peru. The city is the capital of both the Arica Province and the Arica and Parinacota Region. Arica has a mild, temperate climate with some of the lowest annual rainfall rates anywhere in the world, consequently there are rarely any clouds over Arica. Arica is located at the bend of South America's western coast known as the Arica Bend or Arica Elbow. At the location of the city are two lush valleys that dissect the Atacama Desert converge: Azapa and Lluta. These valleys provide fruit for export.
Things to do in Arica 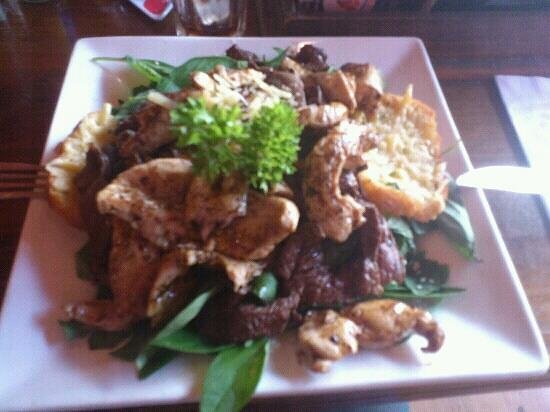 Finding a decent place to eat in Arica seems harder than it should be: you can walk around downtown for a while and see very few decent restaurants. So with limited choices, the attractive looking Cafe del Mar stands out. When we arrived for dinner, we were "sold" by the blackboard outside promising a 3-course salmon dinner at a reasonable price. The deal was also on the printed menu. Unfortunately, the waiter told us that was only available for lunch. It's incomprehensible to me for a restaurant to leave a blackboard outside for a special that's not being offered, but things aren't always so straightforward in Chile.
We then scrambled to find something else to order, as there aren't a lot of obvious dinner choices on the menu. We decided on seafood crapes and hamburgers as alternatives. Both were reasonably priced (4000 to 5000 pesos, as I recall) and tasty. The food was well prepared, and the service was decent, considering how busy the restaurant was (which I attributed to few other decent dinner options).
Bottomline, not a terrific dining experience, but a decent one. I doubt you'll do much better in downtown Arica. 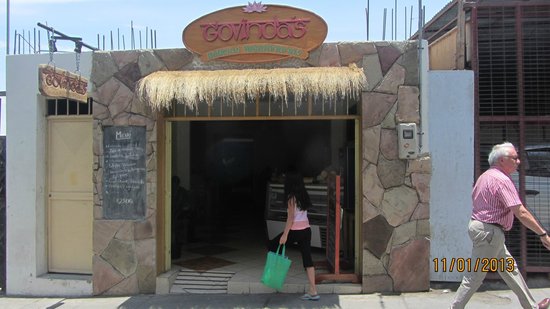 Higly recommended - for something completely different. The setting is inside a well-aired location with quaint tables and chairs, and buddha keeping vigil in the corner. They offer a set menu with choices for starters and mains. The vegetarian food is extremely tasty and comes in generous portions. They also serve very refreshing herb-infused water. I really enjoyed the experience ... very down to earth, nothing extravagant yet good value for money. 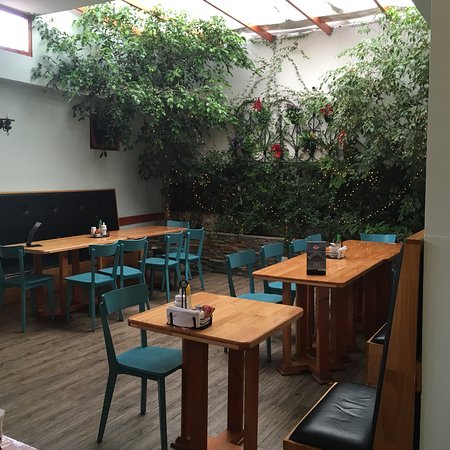 Great food, great atmosphere and great service! We had dinner here twice and loved it! The pizzas are very tasty and the prices are very reasonable. Would definitely recommend! 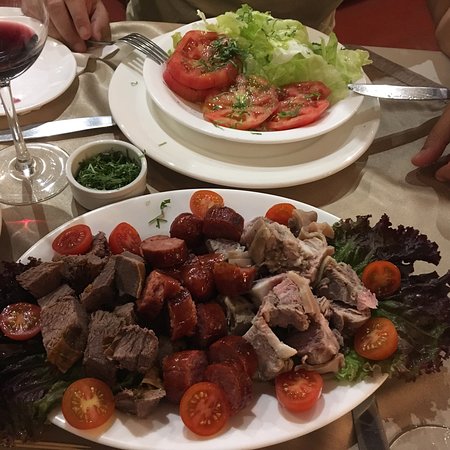 Restaurant with 30 years of experience, Located in the center of Arica, offers specialty in grilled meats, typical Chilean food, fish an seafood.

They treat foreign and young clientele like garbage, I didn't even recieve the plate that I ordered.
Upfront the person greeting me seemed very friendly, but after I received my starter I could hear them snickering about me in the back.
(I have dreadlocks and a sort of hippie look, probably look poor in their eyes)
The starter consisting of a ceviche was great, but it wasn't very much better than the 1000 pesos ceviche down at the harbour, considering the price tag I was expecting something more.
The steak I ordered came with literally no garnish whatsoever, and it was not even rare like I asked, more of a medium well.
Would eat here again if they dropped their prices by at least half, at the current price there are tons of better options. 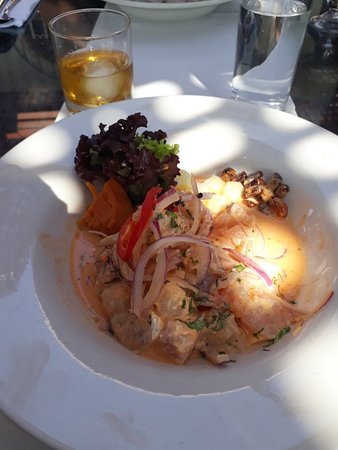 excelent peruvian food it has a great card of dishes the best for me are: lomo saltado, aguadito de pescado, pulpo nikkei, trio de causas, causa crocante good service on the beach 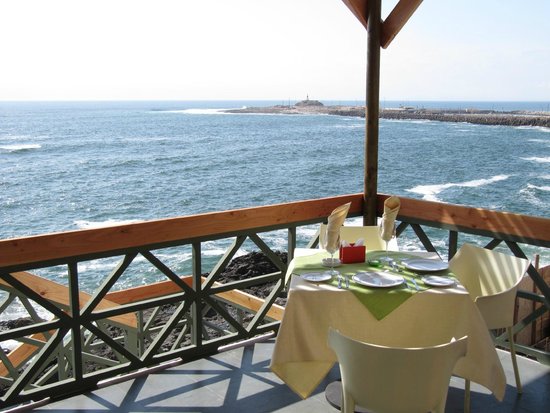 Reviewed By Richard B - London

We were staying nearby and had been recommended the Maracuya as a good place to eat in Arica. It's on the coast just south of town, and has a lovely sea view - the Terrace area in particular. We visited on a Monday evening and inevitably it was fairly quiet. Service was excellent, as was the food - sesame toasted tuna was the standout while the Maracuya mousse as pudding was really nice too.
Sitting outside with the waves lapping the shore, great seafood, nice ambience and a good selection of drinks too. A very nice evening at this top end restaurant. 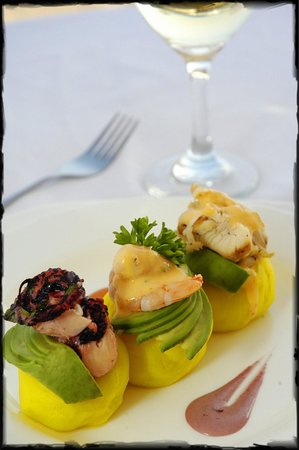 VVaro&apos;s is a restaurant with letter style menu consists of three stages: entry - main course and dessert, everything is your choice, you can choose your menu from a variety of 8-10 types of preparations. Every day you will find a variety of fresh seafood and meats such as loin of beef, pork, lamb, duck, chicken and form an important part of the preparations of typical local dishes. Varo&apos;s is located in the heart of Valle de Azapa, an environment which is functioning with the green of the vegetation with the arid hills surrounding the valley. Restaurant environments are widely comfortable outdoor spaces to enjoy the fresh air or their indoor dining. A nice and cozy decoration to make you feel pleasant and relaxed. Regarding the bar service, we have a wide range of Pisco Sour cocktails and typical local fruits, like fresh fruit juices with refreshing natural juices which are prepared. One of the attractions of the service are carts with entries to the table and then the great variety of desserts to choose from.

Very disappointing food and service... No one to greet people and eventually just sat down as we were hungry. After what seemed like ages someone approached us and we asked for a menu, kind of looking at us like we were idiots because they don't have an actual menu. Serves us right for being tourists and never having visited their restaurant nor country for that matter.
Appetizers were the highlight of our visit and mediocre at best, main course were disappointing all around (party of 3). Apple strudel as they dared to call it was definitely an abomination to apples and strudel.
I'm not high maintenance at all nor were the others, but this was just not good food nor service and not worth our time and money. 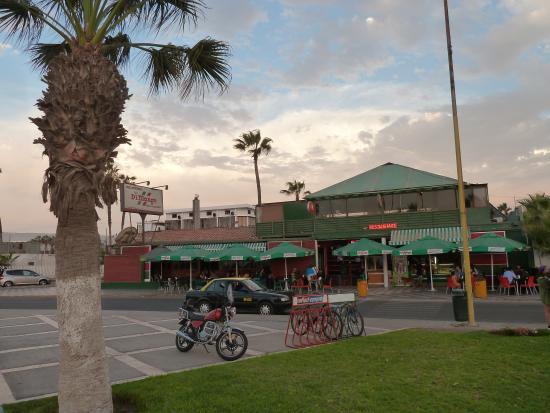 Given the 28*temperature we stopped the Cab and entered. ... A mango and mixed fruit or Copa di Mango which disappeared rather quickly. Being less adventurous I settled on a Corona. Service was good and staff friendly. Different way to ask for bill et cetera just tap the appropriate button on the table food list. 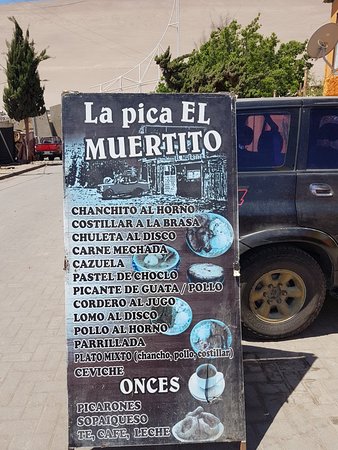 We went on a really busy afternoon. It is very popular with locals and the food is basic traditional Chilean fare. The staff seemed friendly despite the busyness, with the exception of our slightly stroppy young waiter which was unfortunate, but it was still nice. 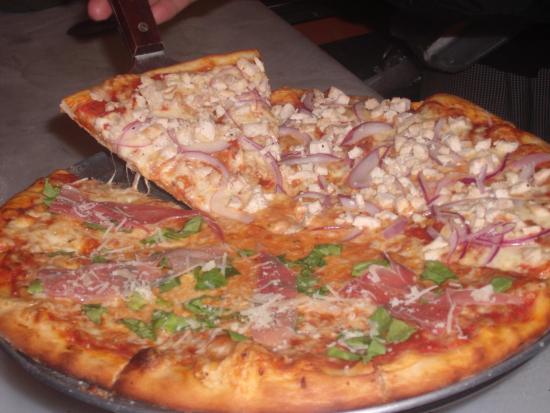 Arica is a bit of a one horse town so not much happening.most shops were having their siesta.
We luckily found the Lucano pizza restaurant.
The owner spoke English and both she and her staff were very pleasant.
The was delicious and not expensive.
We paid with USD and even the exchange rate she used was not extortionate.
Local crystal brand cerveza. Cold and delicious
Recommended to visit