The 10 Best Things to Do in Svendborg, Denmark 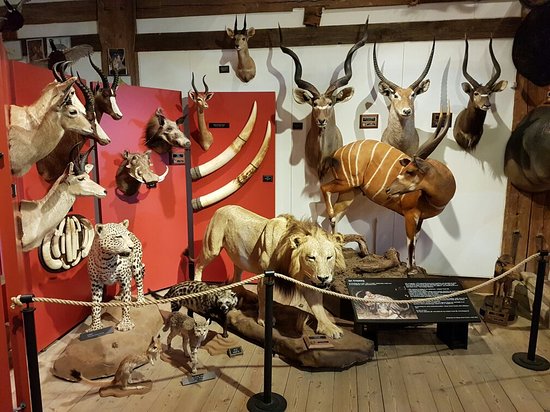 You can't really beat a wander around a Danish castle, in the rain, on a slightly cold day, when you can't really decide what else to do.
But it is a pretty castle, the house is nice enough, the grounds are pretty and the view across the sund is quite spectacular. If you have time take a wander down to the forest and a walk down to one of the other Beaches.
One word of warning, make sure there isn't a special event on when you intend to visit or you won't even get onto site without parting with a lot of money! 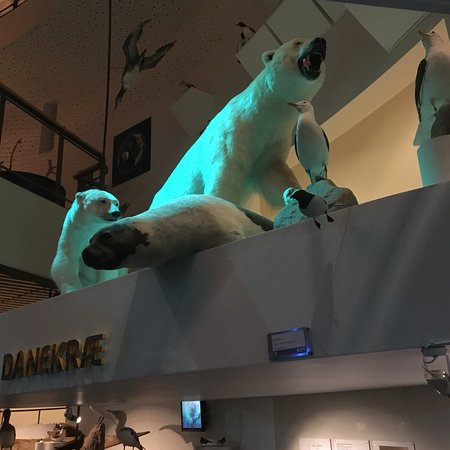 The red deer bellows. There is lightning. The bear wants to be cuddled. Get close to the animals while lighting, sounds and films change the atmosphere in the room. Tasks and information about the animals in English. SPIDERS: Special exhibition with live spiders and fun activities.

I actually expected more from the museum, especially for the high price. They renovated it and it looks more modern now, but I found that it lost its charm and now it looks modern, but I think it's more hype than substance.
I am aware that the museum is made especially for kids and I went there just with adult people and we did have some fun and learned something. But often you can't find English translations, it's very mixed up, you sometimes have German information text and sometimes English and sometimes none, so this is really annoying sometimes. Also, they used to have those boxes where they put the preserved specimen of animals in their natural surrounding and this was much more educative than how they did it now after their renovation - they put all the animals together on a neutral platform with few explanations. That was really not what I expected, seeing a bunch of preserved specimen together and sometimes it ddn't even make sense.
Also, I disliked the section of spiders and snakes. I'd see that museum as a chance to make kids get interested in those animals and raise a consciousness for the importance of them. Instead, the museum works with the scary feeling one gets when seeing a super huge spider and stuff like that, I really didn't understand that.
I liked the polar bear where you could stand in front and take a picture. I also liked that they used a lot of media and it's interactive at some points. But some of the games didn't work or weren't really "surprising".
I really liked the idea of putting the ainmals that live in the sea in the basement, those which live on the ground in the first floor and the birds on the second, but the concept wasn't preserved through the whole museum, so it didn't make any sense!
Also, the acoustic characteristics of the building are kind of weird, you hear loud voices from everywhere and it keeps on being really loud, it seems like they made a kind of mistake here, really weird.
But I guess for kids it might be nice to see the animals and to learn a bit and play around. I'd recommend the visit when you have enough money in your pocket. 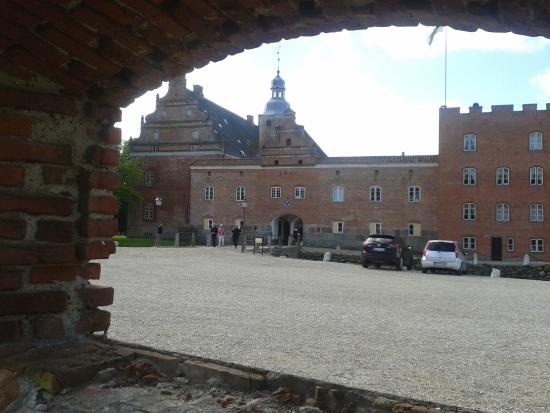 My mother and I were treated like Queens. The rooms were truely palatial, newly remodeled with soaking tubs, heated floors, and wonderfully comfortable beds with down feather duvets. Outside the bedroom window was a swan swimming in the moat, I couldn't have asked for a better view. The public rooms were comfortable and very inviting. The breakfast was absolutely delicious and grand. We were welcomed warmly and had a wonderful stay. My only wish is that we could have stayed much longer but alas our travel schedule did not allow it. 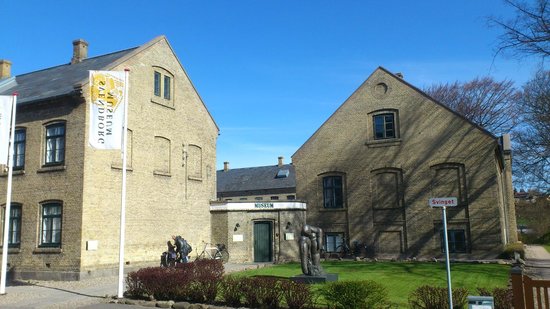 The Welfare Museum is housed in Svendborg's old Poorhouse, a unique set of buildings showcasing an important period in Denmark's welfare history. Doors open into a world that up to now has been hidden from most of us. Here, we learn some of the stories surrounding the many people who lived on the dark side of society: the poor, the sick and the homeless who lived here, whether briefly or long-term, during the 102 years when the Poorhouse operated. Traces of the hardness of their lives are everywhere. The Welfare Museum conveys to the visitor a feeling of the past that creeps under the skin.

Moving and touching experience - a museum that shows and make you feel how it was to be poor in Denmark. I have been here with two groups: Japanese robot engineers that were amazed and astonished. And with creative professional from Fyn - they were enthusiastic and surprised, happy to have discovered this beautiful and hidden gem. A Must See attraction when you are in the Svendborg area. 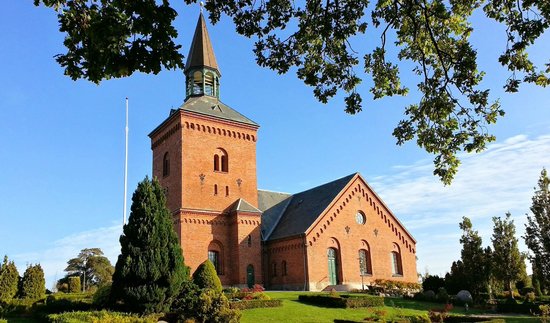 Bregninge Kirke is a beautifully placed church on the highest point of the South Islands surrounding Svendborg. On a clear day, the view from the hills is very beautiful, incorporating the majority of the Islands in the South Baltic. A climb to the top of the church tower is certainly worth the effort- a breathtaking experience indeed. Highly recommended! And of course the cemetery is beautifully kept- tranquility itself. 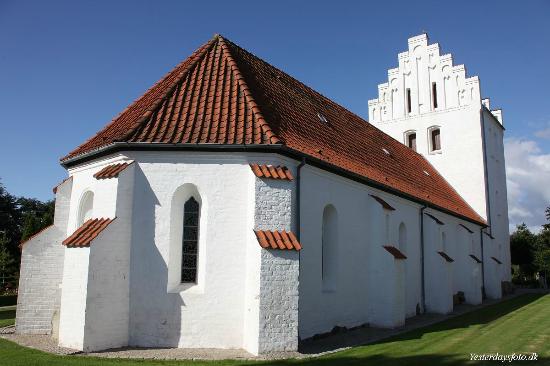 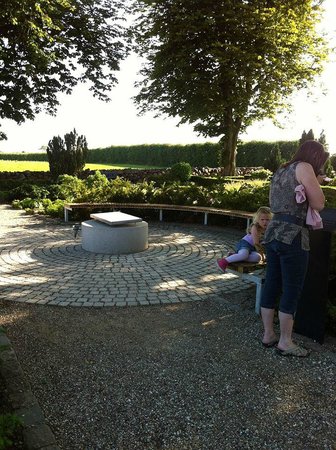 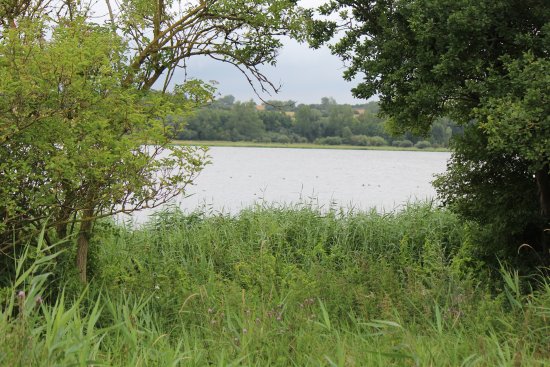 Reviewed By Per Nikolaj B - Risskov 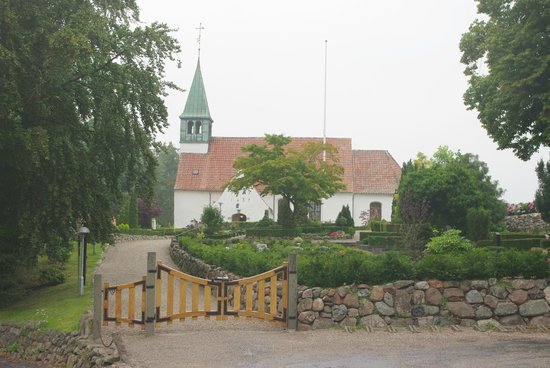 The priest Thomas Østergaard Åhllmann is a rare priest, who through his natural empathy and charisma is achieving a small revolution in activating Lutheran beliefs in a normal passive Danish religious environment.
He is very popular in his small island constituency due to his great church ambience, brilliant voice and always thought provoking mixture of world events related to the holy scripts in his mass, both among children and adults and attracts a full church for his weekly mass on Sunday's at 1000.
The church location is stunning, the architecture is perfectly and typically minimalist and beautiful, while the church yard surrounding the church is a true fairy tale of gravestone texts and flora.
As a Dane abroad, to me this is a regular home coming pilgrim destination. 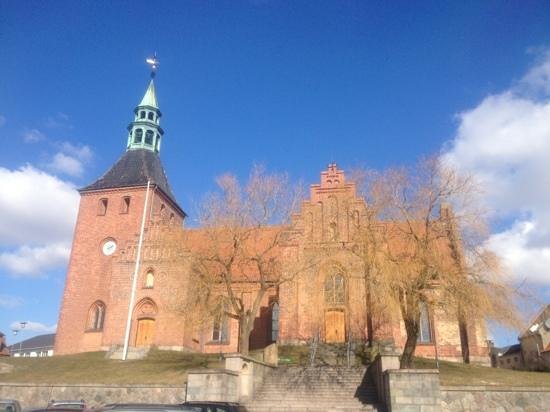 It's a nice church on a small hill in Svendborg. I loved the stained glass windows! Here was a guy practising on the organ when I visited which made a great atmosphere in the otherwise empty church.