The 10 Best Things to Do in Segovia, Spain

Segovia is a picturesque old city with twisting alleyways, the highest concentration of Romanesque churches in all of Europe and pedestrian-only streets, all bordered by a medieval wall and two rivers. In 1985, this sleepy Castillan town was declared a World Heritage site by UNESCO. One of the main tourist attractions is Alcázar, a royal palace built sometime around the 11th century where Queen Isabel agreed to fund Christopher Columbus’ exploration of the New World. The picturesque palace is said to be Walt Disney’s inspiration for Cinderella's Castle.
Restaurants in Segovia I found the aqueduct impressive & well preserved. Also found the secluded nun convent a little further away from the summit of the aqueduct, the door to the convent was closed and decided not to ring the bell as I was not sure whether they had any baked goods for sale as based on the previous reviews. However, the town of Segovia was way too touristy, too many shops, its like walking down a major shopping mall. I was hoping to visit another royal palace about 7 km away from Segovia called La Granja de San Ildefonso but the bus station employees of La Sepulvedana at Segovia were very unfriendly & grouchy. They were not able to confirm with me whether the buses were to leave for the palace based on the timetables found on their website and simply said ask the drivers?!!! Whereby none was available. So my planned trip to La Graja de San Ildefonso did not materialize. So as a heads up to travelers who wish to make the trip relying on bus company, La Sepulvedana, may I suggest that if you are traveling solo hook up with others online to see whether you can arranges shared private transport with them. And when you are at La Graja combine your trip there to the milk glass factory, Royal Glass Factory of La Granja. Because Segovia by itself is very small & compact and you can finish it within 2 hours.

Lovely historic small town. We visited in January & it was so peaceful as there were less tourists. Charming narrow paths lined with unique shops & restaurants that open up into large plazas surrounded by historic buildings & outdoor cafes with beautiful architecture. The Cathedral, Alcazar & Roman Aqueduct were absolutely incredible to see. We really enjoyed all the beauty of this historic town.
We arrived by Sepulveda bus from Madrid Moncloa station. The tickets were 12.50 euro per person roundtrip. The bus took one hour to Segovia. The bus station is in walking distance of all the historic sites. 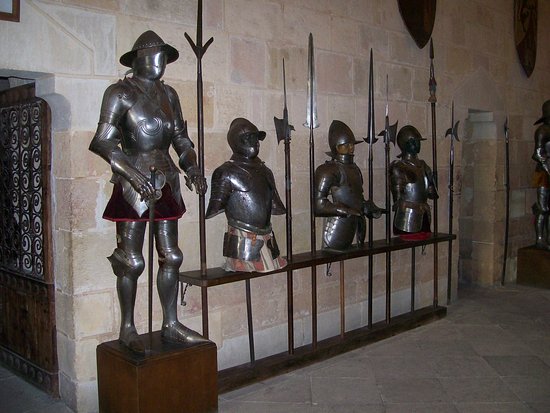 Several reviewers suggest going here after the castle, but I recommend going first, as it gives you proper perspective of what you are about to see. Once you are right up next to the Alcazar, you might not fully appreciate its scale and grandeur. The Mirador is in fact a lovely park with a stream and walking trail as well. It's a lovely green space to contrast with the cobblestone and cement of the "city" which is Segovia. There are no bad views of the castle, but this is certainly a good one and worthy of a stop. Look up in the towers and trees for giant stork nests! 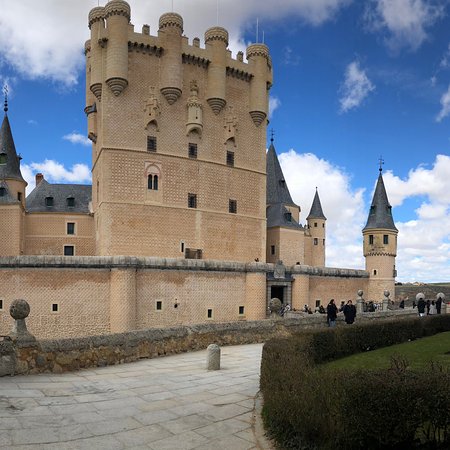 Fortress of the Kings of Castile and Royal School of Artillery Its picture has been around the world: a unique fairy tale-like palace that brings together architectural tastes of different monarchs. It tells -to all those who come to know it- ancient palatial stories. Austere, as they were the Castilian kings, raised on the rock at the confluence of the Valleys of the rivers Eresma and Clamores, the Alcazar seems to watch over the city. Its beautiful Tower keep, often compared to the bow of a boat sailing between the two rivers, is of a stunning beauty. Tourists are amazed to realize that the fortress is a living part of this Castilian city, chosen as a place of residence for many of the monarchs of the Trastamara dynasty.

Terrific building. Very impressive visit and landscape. I recommend the guided tour and the climb to the tower of San Juan, from where you can enjoy the most impressive panoramic of the plateau, on one side, and of the Mountains, on the other. Essential visit. 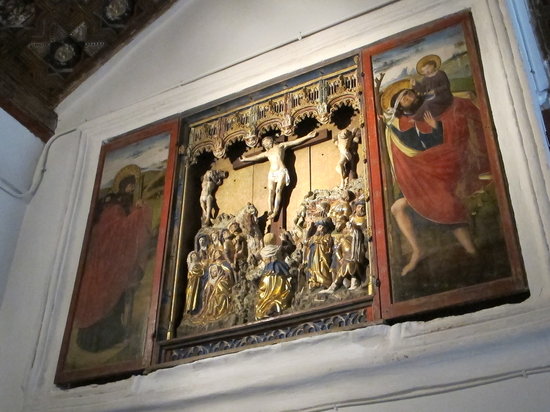 I went alone to this monastery because I'd been to Segovia before and the rest of my group hadn't, so they were going to the Alcazar. But when I say I went alone, not only do I mean that the rest of my group didn't go, I mean that nobody else went. Nobody else was there. I was the only person touring the monastery. The church is open, and in the church one is directed to a door through which the cloister is reached. I tried to turn the knob, but it was locked, and a lady then opened it and greeted me, took my 2 euros, determined which language guide to give me, learned that I can speak a little Spanish, and guided me around alcove to alcove turning on lights and describing things to me. The vestry, chapter room, and chapel are amazingly beautiful in a way both simple and magnificent---the ceilings and the figurines, the illuminated song books, all are exquisite. the square cloister has little alcoves behind glass full of intricate and varied religious objects. Some are quite peculiar and others make you think your soul might be salvageable. 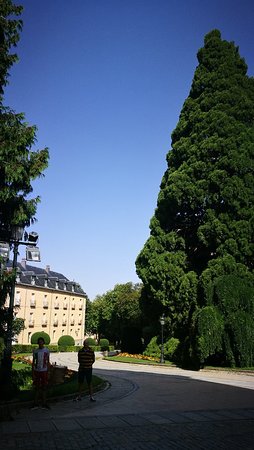 This is for sure a summer attraction for a lovely and romantic garden with flowers and trees. This Versailles style of garden is just beautifully arranged and all the flower nicely combined with Mediterranean Spanish style vegetation. visit only after spring time or summer for the best blooming of the flower. 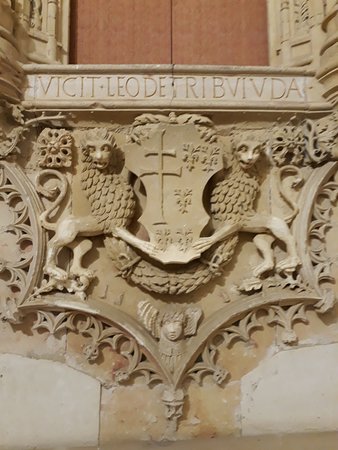 We were able to get a great view of this former Templar church during our visit of the Alcazar which is located much higher on the hilltop. 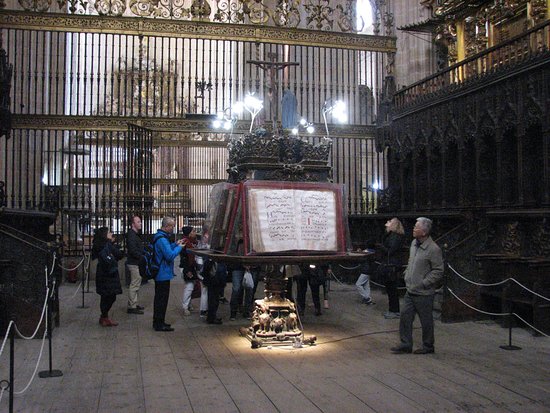 Beautiful location with stunning views of the city and the Mountains. It has an archive room with over 500 antique books. Also enjoy the Plaza Mayor. 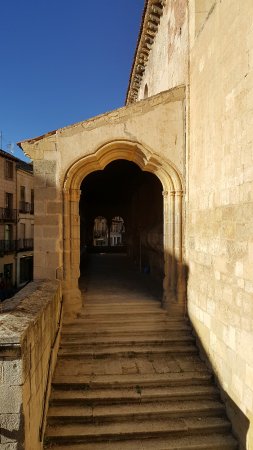 Linking the Aquaduct with the Cathedral this is a lovely pedestianised street lined with shops. Beautiful at night when it is lit up and the locals are having their paseo. 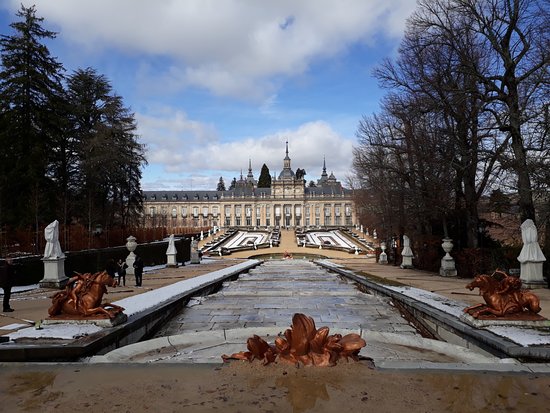 The palace Gardens are very beautiful and enjoyable! There is a picturesque lake at the end, lots of Fountains and the place was not crowded!! The Gardens are free to visit and you can park nearby. But the Gardens need better maintenance. If they were restored they would truly be similar to Versailles. It was a very pleasant visit from Segovia!! I recommend it!