The 10 Best Things to Do in Needles, United States

Needles (Mojave: ʼAha Kuloh) is a city in San Bernardino County, California, United States. It lies on the western banks of the Colorado River in the Mohave Valley subregion of the Mojave Desert, near the borders of Arizona and Nevada and roughly 110 miles (180 km) from the Las Vegas Strip. It is the easternmost city of the San Bernardino Metropolitan area, and is geographically isolated from other cities in the area. The city is accessible via Interstate 40 and U.S. Route 95. The population was 4,844 at the 2010 census, up from 4,830 at the 2000 census.
Restaurants in Needles 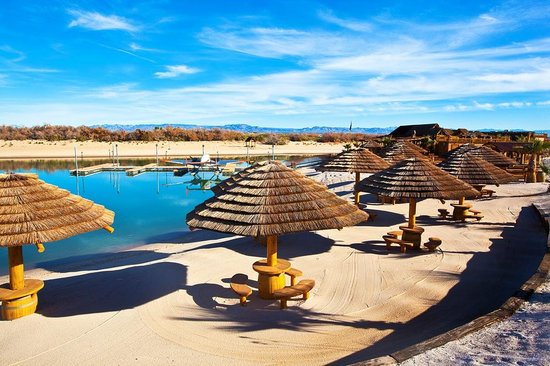 This secluded California oasis is located at the Moabi Regional Park, on the banks of the Colorado River, just 11 miles southeast of Needles on I-40, California. Nestled among the palm trees and surrounded by pristine white sandy beaches, this first-class family destination offers it’s guests luxurious accommodations all situated along Historic Route 66. Whether you are looking for a relaxing getaway or an afternoon refuge from your travels, Pirate Cove offers an oasis that brings you back to a simpler life where you can eat, drink, play, and unwind the pirates way. Pirate Cove offers everything one looks for in a destination vacation or afternoon getaway. For those looking for more adventure, bring your offroad toys out and discover over 3600 miles of offroad trails. Or, set sail on our Boat Tour and explore Topock Gorge and Havasu Wildlife Refuge where you'll find an abundance of wildlife, lava pinnacles and ancient petroglyphs on the gorge walls. Or you can choose to do nothing at all! Just sit back and relax... shaded by thatch palapas along the white sandy beaches of the Colorado River. We are always adding more features and amenities so be sure to check back often.Our Amenities:• On Historic Route 66• Yacht tours and charter• Off-road trails• Easy freeway access• National award-winning restaurant• Pirate-themed beach bar• Seven-lane boat launch ramp• 250 boat slip marina with 24/7 gas dock• Boat rentals and sightseeing tours• Fishing facilities • General store and gift shop• Security-gated dry storage facilities• Free resort shuttle service• Full hook-up RV campsites• Wi-fi available• Children’s waterpark and playground• Scenic nature trails• BBQ and picnic areas Pirate Cove is truly a place in time. If you’ve got the time, we’ve got the place. Pirate Cove invites you to experience this spectacular beachside resort like no other on the Colorado River.

Stopped in here for lunch during our family outing up the gorge!! The food was amazing and the drinks were great!! We met some fun people who were also docked their boat for lunch.
Friendly staff, clean, lots of places for kids to play. I would look at coming back here to spend the night for sure next trip! This Arizona casino on AZ-95 has about 250 gaming machines and is close to Needles, California and Laughlin, Nevada. Recently renovated. The Mesquite Grill has sandwiches, steaks and Mexican food; reasonable prices. Bar with beer and liquor. Big screen TVs. Free parking.
It is part of the Fort Mohave Indian Tribe.

Headed here during a golf and gamble trip to Laughlin, course is about 25 minutes from there. The course is for straight shooters, however the fairways are forgiving and give you some space. Bring golf balls, they can get sucked up by all the desert wildflowers on all sides. I filled my bag while looking for my lost ball. Nice views a good practice course, not overly challenging but it has moments. Have to say it was a relaxing round and pleasant. It was just off aeration for about 2 weeks so we did get thru that. Super nice staff. Good clubhouse, not sure about the restaurant, there is a small one, wasn't open, possibly limited hours during the summer. Good rates for the area. 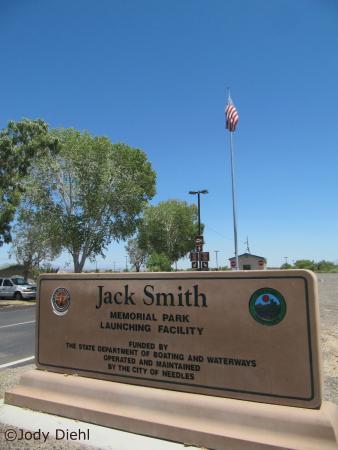 This park has plenty of options for visitors. It has a launch ramp that has four launch bays and two beaches. If you are not a boater you will enjoy the well maintained shady picnic tables over looking the river. There is a nominal use fee during peak season (March thru October). 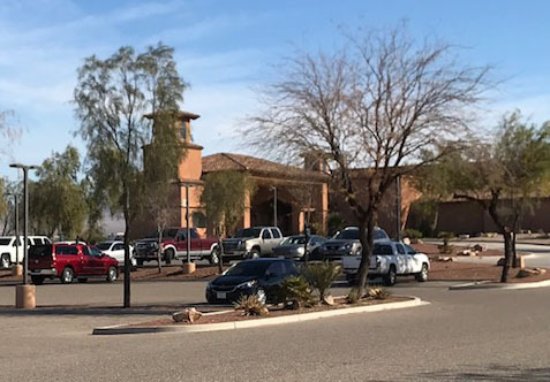 Nestled near the pristine waters of the Colorado River and the Laughlin, NV casinos, Mohave Valley's newest golf destination is El Rio Golf. Designed by Matt Dye, one of the best of the new generation of course architects, the 7,115 yard layout provides a unique blend of challenge and play ability to golfers of all skill levels. The gentle rolling fairways are spread out over 175 acres.

I'm a beginner golfer and found this course to be very forgiving. The fairway was clear, the fringe was solid, and the greens were fast and there were a wide variety of hole layouts. I'll be back again! 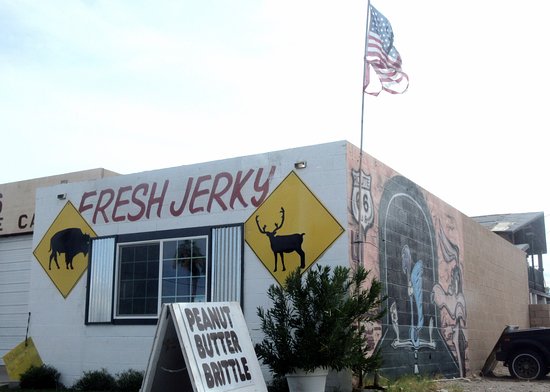 Heading to the Colorado river? Come on in and grab some of our Gus's Really good Fresh Jerky. Free laughs and samples!

Found this place on a route 66 road trip that passed through Needles. A really nice selection of jerky here. Everything is premium quality and made locally. Honestly some of the best jerky I've had. If you're a jerky fan then this place is a must stop! 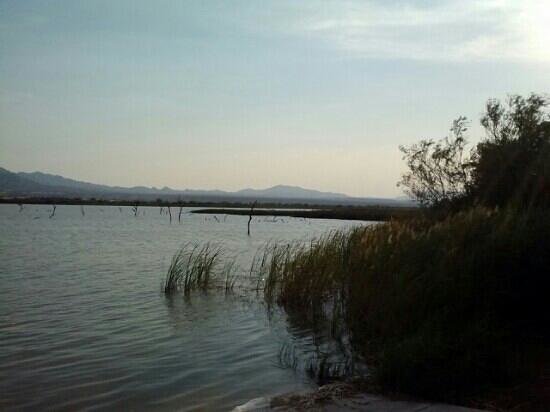 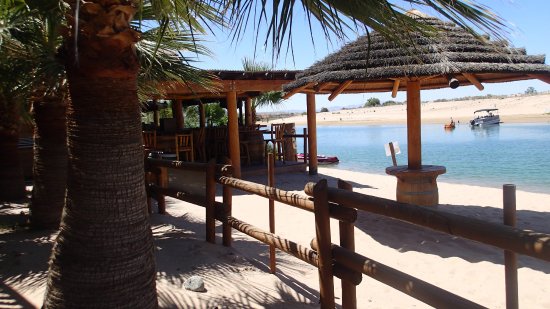 Want a recreation experience steeped in history, yet offering the most modern conveniences? Then Moabi Regional Park is for you.The park is located along historic Route 66 along the banks of the Colorado River, near the meeting of the California, Nevada and Arizona state lines.Among the most popular activities are swimming, water-skiing and lounging on the park’s sandy beaches. A dip in the river is the perfect way to keep cool on hot summer days.Wildlife is also plentiful, and visitors are likely to spot wild burros, beaver, geese, ducks and many other bird species.The park is only a short drive from Laughlin, Nevada, Lake Havasu City, Arizona, and the Oatman Ghost Town. Alongside its riverfront campsites, Moabi boasts a marina and convenience store, beachwear shop, restaurant and bar, and fully furnished waterfront cabins for rent. RV travel-trailer rentals are also available.A seven-lane boat launch is available for visitor use.

I loved staying at Pirates cove Resort. Lots to do or nothing to do. Beautiful nature, on the Colorado River. 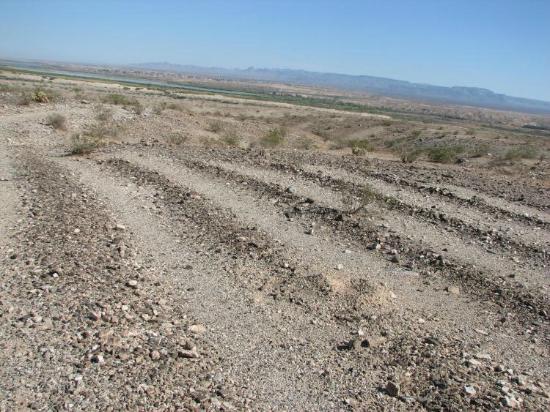 Earth formation believed to be of significance to Mojave Indian warriors.

We spent an hour looking. I Called the number. It is a museum. She said veer to the left. Follow the dirt road. There will be kiosk and a sign. You can't miss it. These have always been the words of doom as they were today.

We also talked to a sheriff's deputy who gave us different directions. We followed both or think we did.

What I did find was a lump of gold (fool's) and a wild horse with foal standing under the only shade tree and some rather large foot prints. The ground has been heavily mined and is soft.

Enjoyed golfing there for the first time. The greens were all in great shape except for some damage in hole 18. All in all it is a great municipal course with a great price to match.