The 10 Best Things to Do in Barrydale, South Africa

Barrydale is a village located on the border of the Overberg and Klein Karoo regions of the Western Cape Province in South Africa. Named after Joseph Barry, a well known merchant of the 19th century it is situated at the northern end of the Tradouw's pass which winds its way through the mountains to Swellendam.
Restaurants in Barrydale 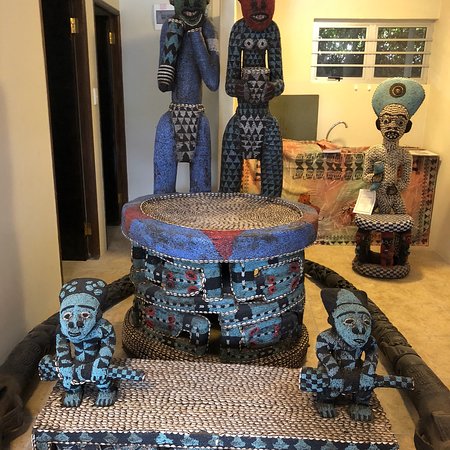 Hardy Grun arrived on South African shores 30 years ago from Germany ready for a new adventure. Fancying himself a bit of a wheeler dealer he landed at the then Sea Point Flea market peddling reasonably priced African Art and Curious. Over time Hardy evolved into a highly respected and knowledgeable dealer and collector of high quality authentic African Art and Gifts. After relocating to Barrydale eight years ago Hardy still maintained close contact with suppliers and friends from yesteryear, guaranteeing a steady supply of quality goods from all sub Saharan countries, still reasonably priced. Hardy and his wife Jenny, who hails from Shanghai, welcome you to visit and are able to converse fluently in German, English, Afrikaans, Chinese, French, Spanish and a bit of Portuguese and Italian. Hardys Memories of Africa is recommended by Tour Guides as the No 1 stop for African Art and Gifts in the Western Cape. Shipping of larger items and orders by surface mail to most countries are facilitated.

Stopped here for a look & were amazed at the amount of goods for sale - the owner was talking to a group of people about the antiques & curios which were very interesting & there were many rooms full of African goods - much of which could be purchased in other places - did feel slightly that we were being watched in case we were shoplifting although this could have been because the staff were not too busy at that time!!! 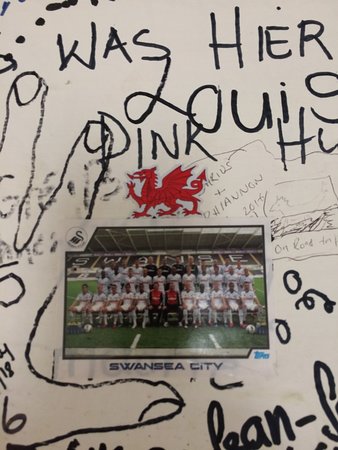 Locals like to tell the story of Ronnie’s Shop, which Ronnie was fixing up to be a farm stand. During construction Ronnie’s friends played a prank on him by painting the word "sex" on his sign. Instead of a farm stand, he left the sign as it was and opened this pub.

This quirky bar is something to see....an oasis in the desert I would say. Our beers were not ice cold but it was the coldest thing in the area. The shop is literally a bar, a small souvenir shop and a cafe with a basic menu. Was nice to look around at what people have left behind; bras, panties , and many other items of interest! 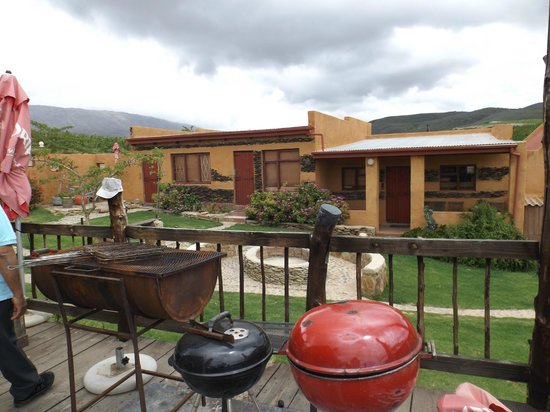 Stopped off for a quick beer on the 62 and stayed a couple of hours.
New owners have turned the place around and while quirky to the non rock lover regardless of your musical persuasion I'm sure you'll love it. Quiet background music when we were there.
Lots of love and attention going into the place, friendly staff and management. Live music regularly, good food and revamped accommodation available.
New shower block just added for campers.
Be ready if you are on the 62 between Barrydale and Montagu as it's on a fast nicely cambered corner.
I love places where the staff and the management have passion about their places. This is definately one of those.
Future stage under construction for the music festivals planned. 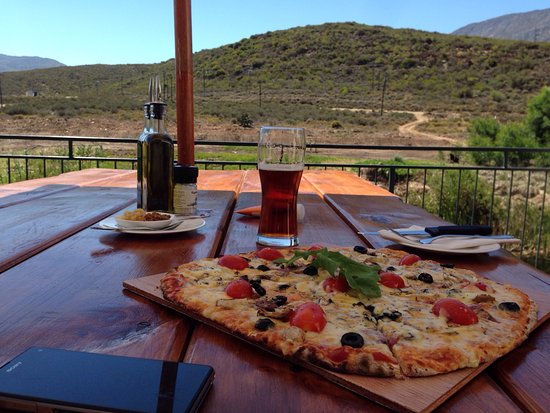 A group of friends and I, popped in for lunch and a few drinks on a Saturday afternoon at this fairly new restaurant. What a great lunch it was! Brilliant service, amazing pizza, GREAT setting! With a view overlooking the river, you don't even feel like you're in Barrydale. Sadly I did not try the craft beer and ale, but my friends did and they said it was really good. I can definitely recommend the Barrydale Cellar for lunch! They only serve pizza, but the pizza was absolutely amazing. Or even just for brandy and wine tasting. Be sure to stop here if you're passing through Barrydale! Well done guys! :D 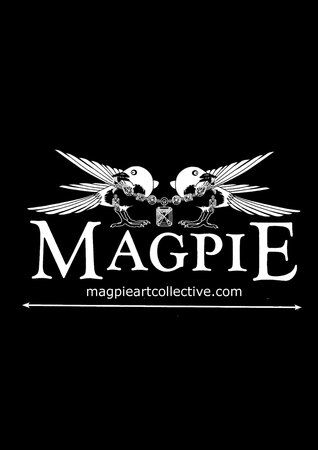 The gallery houses many beautiful pieces, mostly hand-made chandeliers and funky, colourful chairs. We chatted for ages with the Mormon owner (I forget his name), but he was a mine of information about art, history and the quaint little town of Barrydale. Definitely a worthwhile...Moreah thanks for the review! Quaker, not mormon, hahaha! My name is Shane and you'd be welcome to visit again! 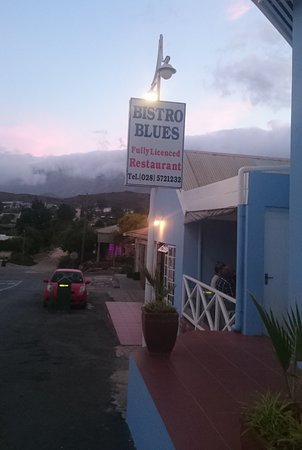 Bistro Blues is a bar and steakhouse located in Barrydale. The bar is a reasonable size and offers a good selection of South African beers, shooters (shots) and other alcoholic beverages. Parties are regularly held in the bar, which makes for fun entertainment and an opportunity for the locals to have some fun in a town that is often very quiet and does not deliver much in the way of entertainment. The yearly Halloween Party is a must. The owners are two very friendly locals by the names of Johan and Winnie Jordaan. Glen Hutchinson is the almost forever on duty barman and is always happy to share information about the local scene and its people.
ps. the rump steaks and spare ribs that are served in the restaurant next door to the bar are fantastic! (So is the eisbein if you're a fan) 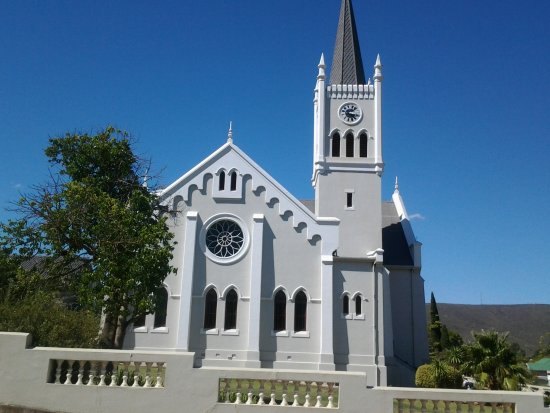 What a beautiful building this is... and so lovingly maintained! The garden too, is so pretty and given the current water crisis, is looking surprisingly good!
I love the repetition of the triple arches of the lancet windows - the fenestration plays an important role in contributing to the graceful lines of the building.
There is a splendid weather cock standing proud on top of the church spire... this church is the most elegant building in the village by far! 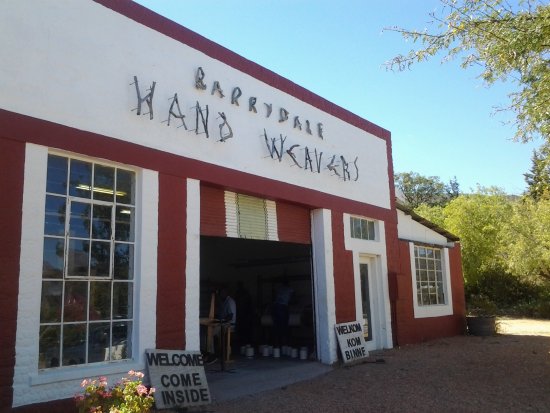 This centre, situated on the main road through the village, was easy enough to find as the rhythmical noise of the looms was a dead give-away! The weaving area has large open areas which keep things things cool andit is very easy for passers-by to step in for a closer look. I had no idea that weaving required so much stamina!
It was rewarding to hear how this venture has taken off from small beginnings and now provides work opportunities for local inhabitants. The products are beautiful - there is a shop next door which sells their products and trading is also conducted online. 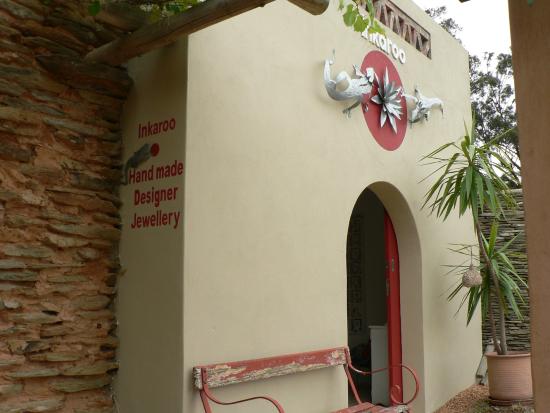 In 2002, Heather started to create her individualised jewellery designs using beads and materials from nature. The thorns of the Sweet thorn acacia tree polished, drilled and spun about with simple beads formed a strong pattern for her future work. Porcupine quills, shells, driftwood and feathers also became her signatures. Although largely self taught, Heather revisited courses in silver working and casting and began to incorporate silver, copper and pewter into her designs. She increasingly added semi precious stones, coral, crystal, lava and Freshwater pearls - combining and transforming her materials into a beautiful and unique collection of jewellery. Earrings, necklaces, bracelets and brooches form her main collection with the occasional insect or small ornament also emerging from her creative heart. Heather has her design studio in Barrydale on the Route 62 where you can watch her work and see the stunningly displayed items that are on offer. Her studio resonates with calm and spirituality and her range displayed, once again, on natural materials including bones, driftwood and giant bamboo. Buddhas, butterflies and lizards all provide an unexpected but perfect backdrop to her designs. But she still thinks that the best accessory to wear is a smile.

Whilst driving to our annual holiday getaway in Sedgefield, the better half and I got a bit peckish as we entered the scenic town of Barrydale, which is about half way between Cape Town and our holiday destination.
So naturally we decided to stop off at Clarke of the Karoo as it is on Route 62 so no unnecessary detours were required.
Upon our arrival we noticed a quaint, inviting and most probably recently built jewelry shop called Inkaroo Jewelry. It must be a new shop as we did not see it last year whilst traveling through.
Naturally the missus wanted to have a little browse around after I'd ordered my french toast to see if there was anything else i could spoil her with this Christmas. I decided it might be a good idea to look with her, just to make sure she didn't go spending all our Christmas savings!
The coolness of the shop was inviting and a welcome break from the karoo heat, with white walls and decorative handmade displays all around that really complimented the pieces being exhibited.
Each piece was unique, all handmade with a variety of semi-precious stones, seeds and beads.
After a few minutes or two we were greeted by a rather bubbly, chatty couple (Danny and Heather) asking if we needed any assistance.
They were super helpful in assisting us in finding the best necklace for the missus and even offered us a Christmas discount with a smile on their faces.
All in all it was a great and welcoming experience and we will be certain to pop in again on our next passage through that way. 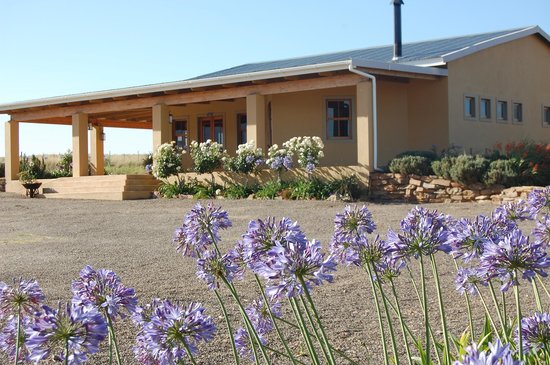 Akkerboom Farmstall has recently been updated with all sorts of new, delicious and decorative products and curios. From deliciously dreamy home baked Date and Chocolate slices, to Jams, Chutneys and a large number of beautiful and interesting gifts. Come and have a taste of our award winning Star Hill wines or make an afternoon of it and enjoy one of our freshly made lunches along with a bottle of wine on our stoop overlooking the beautiful scenery.

I do like to call into farm/vineyard shops but was disappoint here. Not the friendliest greeting that you would expect in a quiet isolated shop. Not a lot in the shop either, in fact not a particularly good visit, travel further to the next place.