Taastrup is a Danish railway town or/and suburb of Copenhagen - 15 km west of the capital, and formerly the administrative seat of Høje-Taastrup Municipality, Region Hovedstaden. It takes its name from the village of Taastrup Valby, which also gave its name to the station established in 1859, from which the town grew. The population on 1 January 2014 was 33,121. It forms a twin (sub)urban area with neighbouring suburb Høje Taastrup since the 1980s, that has engulfed the villages of Taastrup Valby, Høje Taastrup, Kragehave and Klovtofte. This area has almost grown together with the town of Hedehusene. 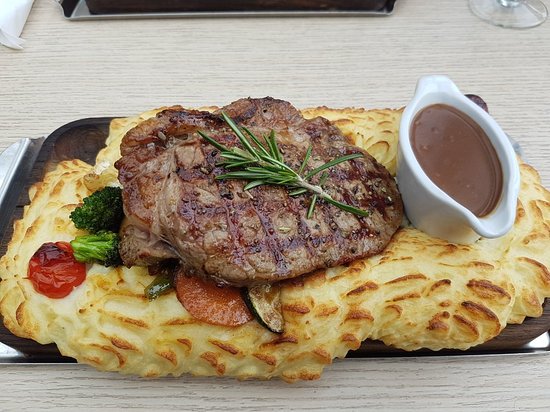 Nice cafe where decent people can have a drink and /or a bite to eat. Very relaxed and laid back, a typical Danish suburban cafe.

...and maybe in the Greater Copenhagen area, in my opinion. I come here every time I visit Denmark and it is always perfect.
Service: polite, professional and helpful. Their recommendation are always spot on. We usually eat on the Terrace outside, if weather allows it. Despite there's nothing to look at, only the street, but anyway I thing it's better.
They usually have a 2 or 3 course deal, and for me it is definitely the best choice incluiding Salad bar, which is very well assorted, plus a plate with 3 "tapas" (or call it a small samples of appetizers) and a main course. The "tapas" was awesome, a brutal shrimp with chili' cheese, cold sliced duck breast (perfection) and warm tender salmon. So tasty and well presented. And finally the main a Ribeye, grilled perfectly, and with all the flavor sticking out. And accompanied by a wine sauce and better than anything bernaisse. As you can see I'm very enthusiastic, but the thing is that I loved it.
And I had no room for desert, but my brother had it. The "rababer" cold soup and sorbet, where pretty awesome. And all (including beer and coffee) for 500 DKK per person, which in in Denmark is a fair price.
Summary: go and enjoy. 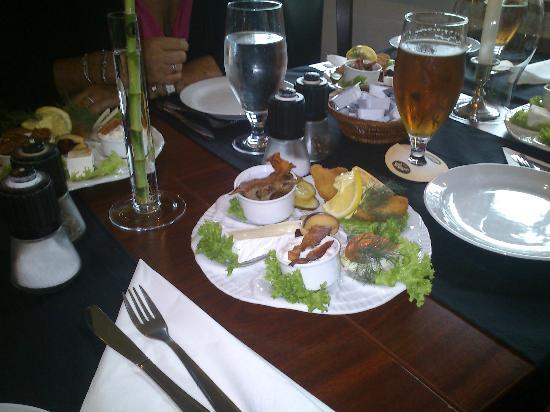 The location is great and you feel that you are far from the busy suburbs when you follow the path to the lake where Spisestedet Mosen is having the best view. The interior is cozy and it is like being brought back in time with inspiration from the French brasserie culture and a mix of the traditional Danish summerhouse feel. The menu looks nice and they have a fair amount of good wines so things looked good on the cloudless and sunny evening.
We arrived a bit late compared to Danish standards, we were in there around 8.30 pm but the kitchen was still open. The waiter informed us, that they were out of some of the ingridiences so some of the dishes were not available. I ordered a traditional Danish Stjerneskud (plaice), which usually is a sure thing and my friend wanted another traditional Danish dish Stegt flæsk, (fried pork with parsley sauce). My friend’s wife is a vegetarian and they were out of their only vegetarian dish. She asked if they could make a dish with some pasta and vegetables as they already had some pasta dishes on the menu but were out of Gorgonzola. After checking with the kitchen the waiter came back and said it was possible.
My dish was fair if I was on the friendly side, the pieces of plaice were small and the shrimps were cold as they were just removed from a jar in the fridge, and so were the champignons. My friend was satisfied with his fried pork but when he wanted to ad the salt, the whole jar emptied over his food, as the lid was not closed properly – he didn’t complain about he just removed the salt from his food. My friend’s wife just looked at her plate and was in disbelief, as it was plain pasta with some steamed veggies on it. There was no sauce and it was badly presented and it didn’t look like something that you would serve in a restaurant. She had to ask for some sauce to make it somewhat eatable.
The wine was good and so was their dessert, but when we reached 9:30 pm, we started to hear yawns from both the kitchen and the waiter even though they did not close before 10 pm, so it was a clear signal to us about leaving. It will be the last time I will set my feet in that establishment. 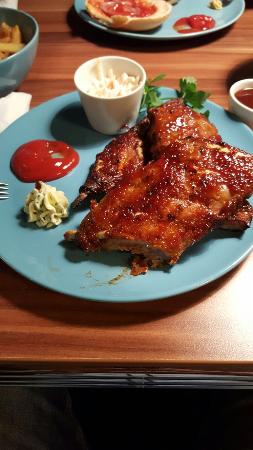 A recently refurbished burger bar / US style restaurant, that serves some very good beer! The restaurant serves a decent breakfast, too. 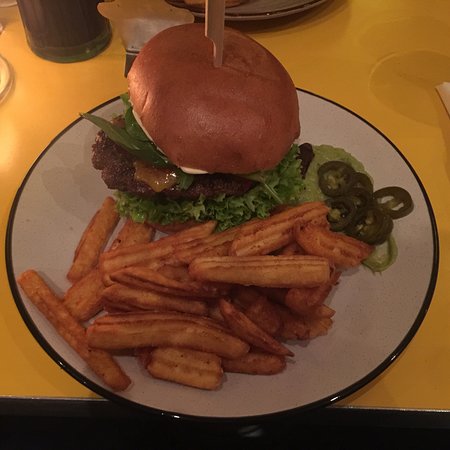 We went to this cafe on a Monday night. It was very quiet, but it was a nice atmosphere and good service. The prices were fair (for Copenhagen) and the food was tasty. We have the Hakkerbof (beef pattie) with veges, and this was very tasty. My wife had the pasta with salmon and prawns, and really enjoyed it. Get the large beer for 55DKR...great value. Would return if near Taastrup. 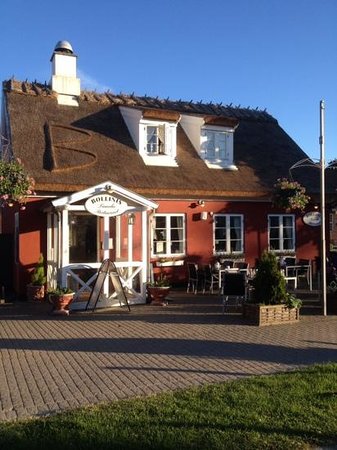 We had the set menu with a salmon bomb to start, fillet steak for main and then pancakes for dessert and it was absolutely delicious. When my steak came out well done instead of rare, the waiter was friendly and helpful and replaced it quickly without fuss. The restaurant is cosy and has a nice atmosphere and the prices are good, especially for the set menus. Thoroughly recommended. 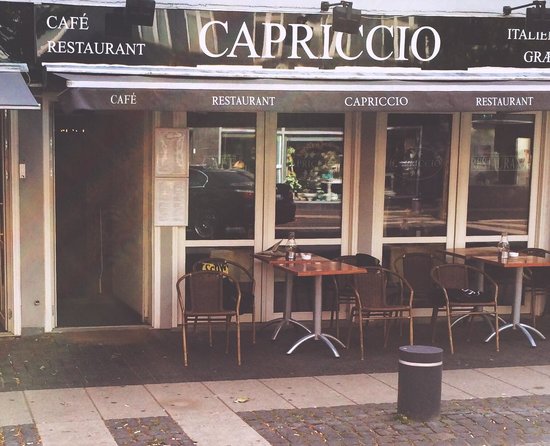 There is not a huge selection of good restaurants in Taastrup, but this one is OK. I agree with the current rating at TripAdvisor, where Capriccio is second, behind Hereford. I ate here several times with my colleagues and found that the food is authentic and good. Pizzas, pastas, fish dishes and steaks are excellent and the service is generally good. 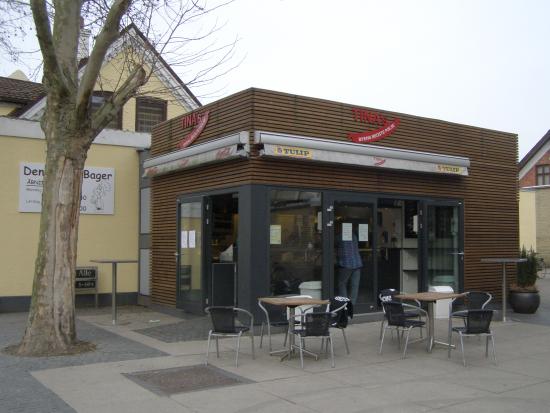 This place is an all time classic. I'd been coming here for ages, and it maintains the original well assorted menu of hotdogs, sandwiches and burgers as always. It recently went thru a renewal, but is still a small cozy place, with a few tables a outside. This is not a restaurant, but a place to get a quick bite or take away.
The food is prepared right in front of you, there is plenty to choose from, and the hotdogs a the best in the country. No discussion. Anyhow my preferred item is the Thai Burger, spicy and very tasty. The "flæskesvær sandwich" is also first class, and maybe more "Danish" if you're not a local and wanna try this out.
If you're in the area stop by! 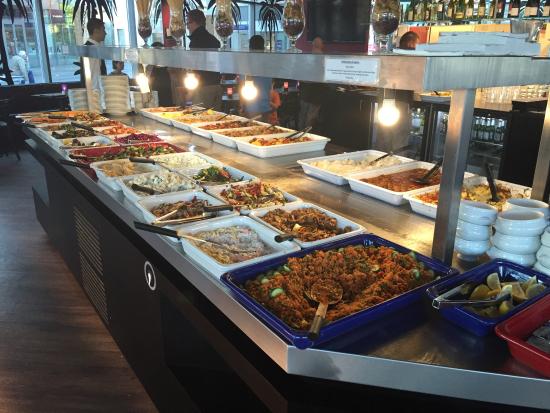 Large place in a good location - with plenty of Seating inside and outside. 99 DKK for a Mediterranean buffet is not bad. Don't expect gourmet food, but the selection is good and the food is alright - with a "kids section" that has chicken and pizza. Good value for money! Excellent service - we were 6 people but they had only charged us for 5. When we pointed it out they said we could have the last one for free!! 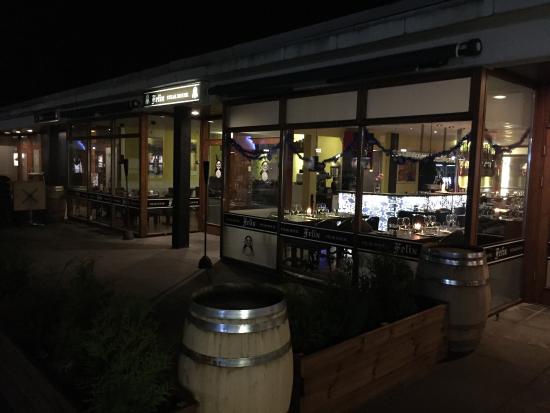 The meat they serve is ok, but no more than that. When you enter the restaurant you think: Yes, but the food does not live up to the environment, so - average. You get less than you pay for.