Stresa is a town and comune of about 5,000 residents on the shores of Lake Maggiore in the province of Verbano-Cusio-Ossola in the Piedmont region of northern Italy, about 90 kilometres (56 mi) northwest of Milan. Since the early 20th century, the main source of income has been tourism. It is situated on road and rail routes to the Simplon Pass.
Things to do in Stresa 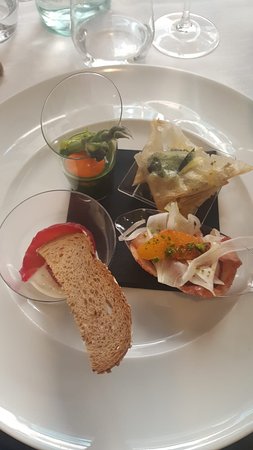 Chose this restaurant after Reading the TA reviews. We were not disappointed. Dinner was excellent, staff was very nice to us, and price was reasonable for the quality. My wife had the steak which was well seasoned and delicious. I went for the cream of celery soup and the pheasant ---- both were awesome !!!!! Will definitely come back on the next trip to Stressa. 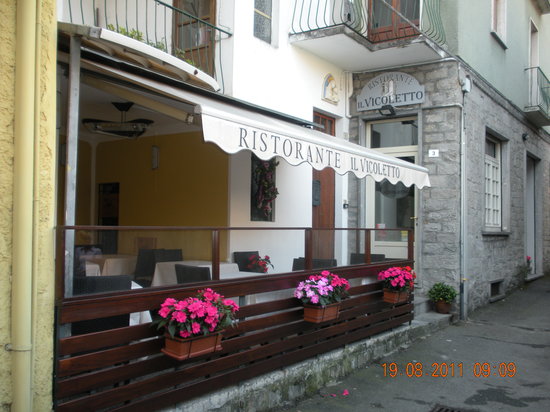 Went as couples tonight. The food was creative, tasty and well presented. However, when we asked about side dishes; as there were none on the menu, we were told our mains came with vegetables. They did and they were good, but they were so minimal. We needed more to complete the meal. Desert of panacotta was also small and not up to par. 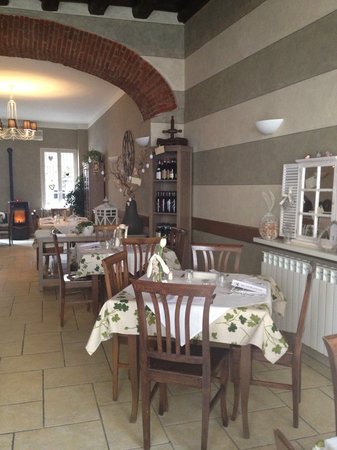 Managed to get in this restaurant after finding two others which were recommended to us fully booked or rather unable to handle a group of 6 people. This was also an excellent place to dine, traditional furnishings, very interesting food, lots of locals eating. Grilled zucchini starters with goat cheese mousse was delicious. My husband's veal bollita? main course was very goodand my lamb shank was beautifully slow cooked, tender and tasty, one of the best I have eaten. We were more or less the last to leave at 10.30pm but the waiters did not make us feel uncomfortable, always the sign of a good place. 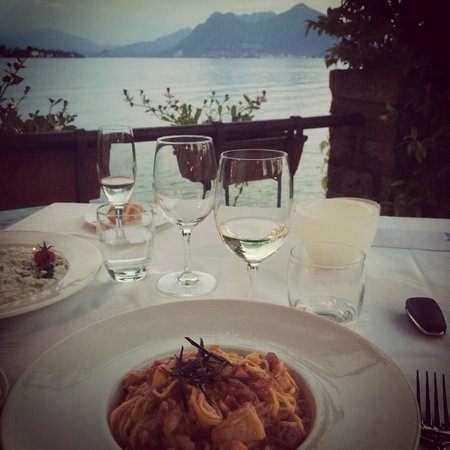 We enjoyed a lovely lunch in the Sunshine at this beautiful restaurant. We had booked ahead, but as we visited the Island the day before we were due to have lunch, we called in to ask if we could possibly have a table near the waters edge. On arrival the following day a lovely hostess welcomed us by name and showed us to lovely spot. The food was delicious, the best meal we enjoyed during our stay. The service was impeccable and not rushed so you could enjoy the fabulous surroundings for as long as you wished. Would highly recommend but please book ahead. 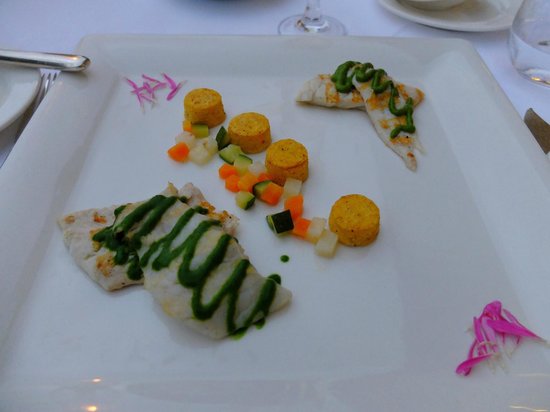 We are just about to check out of this grand hotel after an enjoyable 4 night stay. The hotel is superb in every way from the courteous attentive staff, magnificent grounds and Gardens and of course the palatial building itself. In all it is one of the best hotels we have stayed in and have no hesitation in recommending it to intending guests. 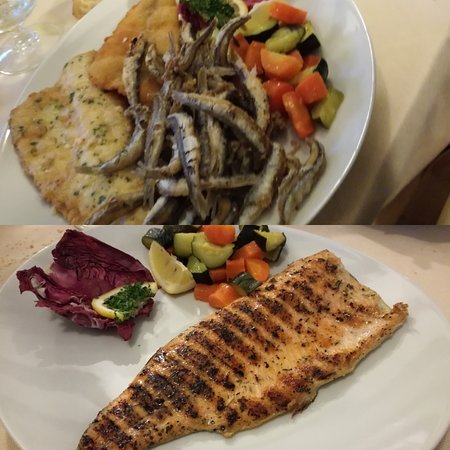 We went here for lunch after a morning of island hopping. Very busy and quite large restaurant, obviously very popular, couldn’t have fitted any more people. Although so busy the service was excellent, the food exceeded expectations, the house wine and cold beers were great too. All enjoyed their meals and meat lasagne, vegetable lasagna, tortellini with spinach and ricotta and another tortellini with seafood (not sure the name) were excellent. The prices were very reasonable although coming from Australia everything in Italy is quite reasonable! 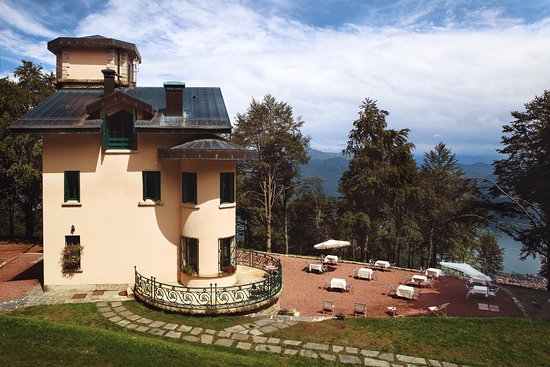 Villa Pizzini serves typical food using only seasonal ingredients and sourcing local fruit, vegetables and meat. Every meal is home made and prepared while you wait to guarantee you the best culinary experience. Our speciality is the homemade pasta that we make daily using stone grinded flour and the freshest eggs, the sauces and filling are also prepared by us, using local sourced ingredients and only seasonal vegetables. We have a broad wine selection that we change together with the menù to guarantee the best match, we also have beers from independent Breweries and BIO drinks.

While wandering around the top of Mottarone, I chanced upon the sign for the Villa Pizzini and found the restaurant easily. Artistically decorated, my lunch there with a spinach ravioli entrée and a polenta-beef main dish were so very tasteful that I wanted more and had to opt for a cool desert, a lemon tarte. All this with friendly and informative service and, of course, an excellent Barbaresco. 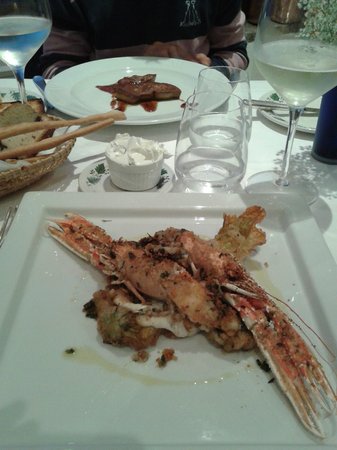 Followed tripadvisor and booked here for 5 for dinner. Charmingly attentive staff made us welcome with a nice table. The menu is not particularly extensive, but it is quite ambitious. A really good mozzarella and tomato amuse bouche, great grissini and lovely breads started us off. Two of us went for the meat menu. The 12 year old shared some foie gras, which was superb. The ravioli starter with truffles was outstanding. The spaghetti with shrimp and anchovies was ok, perhaps a little "fishy" but the veal was great. Desserts - cassata, hazelnut ice-cream or a strawberry and coconut confection all disappeared. The wine list was good and the recommendation was thoughtful and not self serving. The ambiance is nice - the view of the lake is slightly obscured and there is a bit of noise from the road but the food was the best we have had in the region. It is definitely worth the trip outside Streza, and with parking on site, easy-peasy. Our party was a senior, two adults, a teen and a 12 year old, and all enjoyed it greatly. Thoroughly recommended. 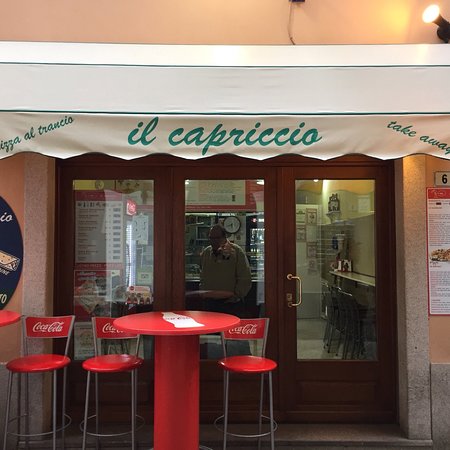 our pizzeria with over ten years of experience offers you the chance to eat a healthy, wholesome pizza at affordable prices ..... COME

We bought a giant Quattro Formaggio pizza to eat by the lake and it was very tasty. The thin crusty base and generous covering of local cheeses made it a very enjoyable snack shared by friends beside Lake Maggiore in warm Sunshine. 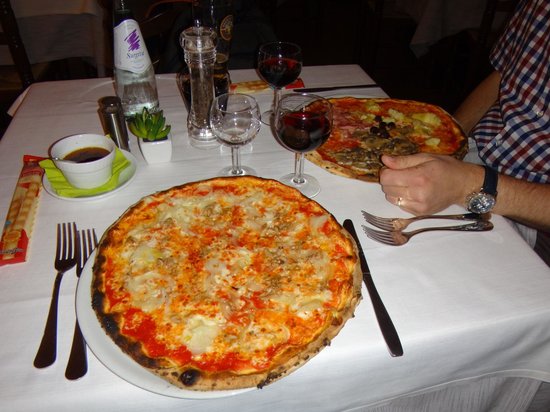 Our small group tour guide took a few of us here for one of our moderately priced quiet dinners. We found it to be enjoyable, very good dinners and pizzas, and we found the owner to be delightfully friendly and cheerful. I would really recommend this off the tourist path place for a nice dinner with friends.