6 Things to Do in Keyser That You Shouldn't Miss

Keyser (/ˈkaɪ.zər/) is a city in and the county seat of Mineral County, West Virginia, United States. It is part of the Cumberland, MD-WV Metropolitan Statistical Area. The population was 5,439 at the 2010 census.
Restaurants in Keyser 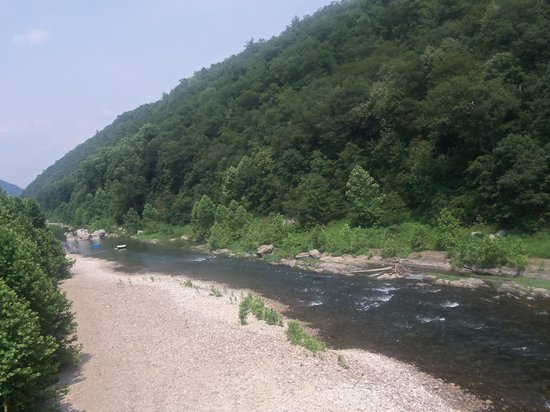 Your journey begins at Wappocomo Station, situated next to a charming homestead and a sprawling view of the mountains. Enjoy the sounds of vintage diesels as they lead you through beautiful pastures and farms dating back to the 1700s. As you wind along the South Branch of the Potomac River, you’ll enter a visually-striking gorge known as the Trough. One of the most scenic spots along the South Branch, the Trough is home to American bald eagles. All excursions are round-trip and include narration. A concession car is available to purchase snacks and drinks. Sorry, no smoking, pets, or alcoholic beverages permitted.

Well, we decided to go on the train excursion after hearing so many wonderful things about it. The weather was perfect, everyone that worked there was very nice and helpful, except for one person (more on that later). The train goes down through a valley along the river, we saw 3 eagles nests (bring your binoculars, wish we had) 1 eagle was finally in flight on the way back. And we saw a couple of otters playing in the river. It's just a beautiful train ride even without the eagles. Someone was explaining all the history and everything we were seeing. We met a nice elderly couple that sat by us. I think it gets very crowded on the weekends, glad we went on a weekday instead. You can bring your own food and drinks (no alcohol) or there is a car that has drinks, snacks, hot dogs, sandwiches, ice cream, etc. They were reasonably priced too. You can ride the coach or pay the extra for the club car with the meal. Not sure if the meal is worth an extra $50 per person, you'll have to look at the other reviews for that, we were in coach. The short trip is 3 hours long during the week. Best to go in the afternoon bc the eagles don't go out of the nests until then. And I wouldn't recommend kids under 5 or 6 bc they are bored silly, and parents have to try to entertain them. Bring games, and or toys, they have tables in some cars, then they'll be happy.

Now on the to the bad, unfortunately. There is an employee on the train, not sure what her name is, she is there when you first board and stays in the food car. When we first got on and were moving to the back, I had to hear her scream for 10 minutes why we weren't moving fast enough. Well, I thought she must be having a bad day. We went to one of the last cars that are open and stayed there until last 45 minutes. It's when we decided to start moving to the front that the problems started. We went to the front where the food car was, sat taking in the scenery, and got to see the woman who was yelling earlier, belittling the 2 women working the food car. She's obviously a miserable person and I came to realize she wasn't having a bad day, that's just her personality. Belittling and bossy, and a bully. Anyway, we got up and were walking to the front of the food car and she stepped out and said we weren't allowed to be there and should be sitting down in the most belittling, snarky voice, fine, my mistake, I started to apologize and say we didn't know that and we would go back, but she didn't let me get a word out of my mouth, and just kept on, and I'll admit this I lost it, my temper, my cool whatever you call it. She may be able to bully and belittle employees but I still don't know what I happened. I said very loudly, over top of her, that's fine lady, we are our way to the back. I stormed off, sat in the last car and waited until almost everyone was off to leave. On the way out, I said something about it to the 2 women and they said they were so sorry. No I'm sorry bc you have to work with her everyday. Now I was at my worse by this point, I have never, ever, in my entire life yelled or had an argument in public. It's something you just don't do in my book and the other thing is that she was a little older, and I never say anything to anyone no matter what you do bc I adore my grandparents and was brought up to treat your elders with respect. But I was seething so much, I could only see red, and when I got off the train, of course she was there. Well, I called her a nasty old bat and she mouthed off to me and said, "who are you calling that?" Really lady? I said, "you!" I'm embarrassed and ashamed of myself except that other people said that she deserved it, who witnessed everything. And I think the 2 women working in the food car were happy someone told her off. My husband said she was snarky and belittling to other people also, after I left. Well, this lady needs to accept that she does not have the personality to work with public and look for a different job at the train excursion or somewhere else. I'm old enough to realize she wasn't having a bad day, this is how she treats everyone, inside and outside of work. I know a bully when I see one.

I worked in customer service for years, I don't expect anyone to coddle me, thank me or treat me special just bc I'm a customer and bad days happen to everyone, BUT I DO EXPECT TO BE TREATED WITH RESPECT AND NOT BELITTLED OR SEE OTHER PEOPLE GETTING BELITTLED. She'll remember me bc I sure that no one ever stands up to her and I bet she has a few choice words for me. And I do feel reallly bad, about loosing my temper with a complete stranger, in public. The worse part is I'm sure that she doesn't think that she did anything wrong bc people like that don't ever consider anyone's else's feelings. 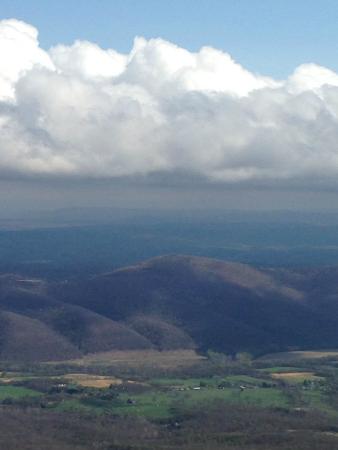 No, it is not in the main park area and no, it is not quite so easy to find, but the locals will point the way. Climb the steps and ignore the spray-painted rocks and look out over the valley to see three states. There's a good chance all you'll hear is the wind and you can feel yourself become small as the vista spreads out before you. You can climb down the front side of the rocks onto the rocky tableau below with just a bit of desire and youthful agility, and it makes for a nice spot for a picnic-in-a-backpack. 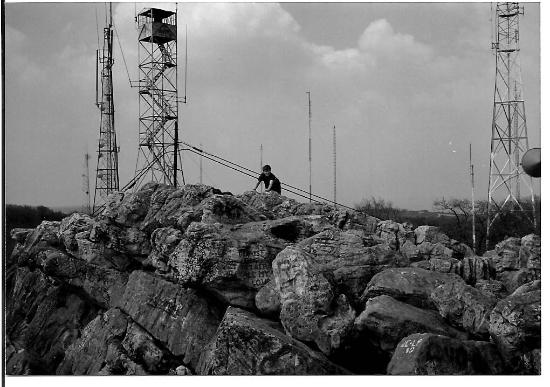 The scenic overlook of the Potomac Valley lets you seen from Maryland into West Virginia and Pennsylvania. Dan's Rock, not a part of Dan's Mountain State Park, further south, is a peaceful, solitary place. The metal stairs to get to the top are courtesy of my cousin. It is not really handicapped accessible. You can skip the stairs and scramble up the rock. Do be careful of rattlesnakes. They are there - don't bother them and they won't bother you. The panorama is worth the trip. 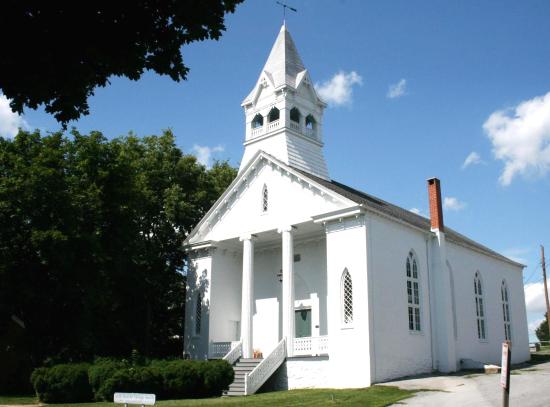 South Mountain Heritage Society preserves the historic Resurrection Reformed Church, an architectural landmark located in scenic Burkittsville, Maryland. Erected in 1829-1831, the church was the site of a field hospital following the Battles of South Mountain and Antietam in 1862. The museum includes exhibits which tell the unique heritage of Burkittsville, its people, and the surrounding country.

Because we couldn't park the RV at Gathland, we actually turned around here. We stopped on a Sunday afternoon and walked through the cemetery. This alone was worth it. These families go back to the mid 1800's. We found it very interesting. 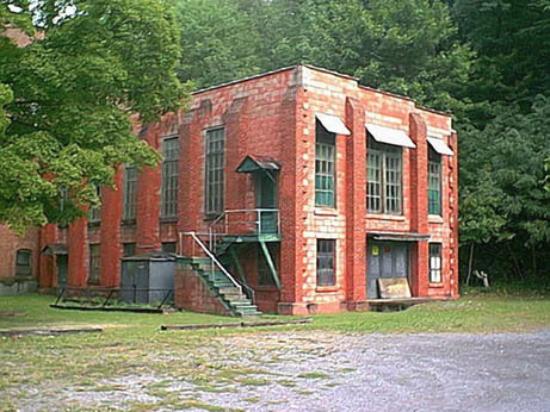 The old Klotz Throwing Mill, popularly know as the Lonaconing Silk Mill, closed and locked its doors in August of 1957, due to a labor dispute. It is intact inside. The 1957 calendar is on the wall, and the workers lunch pails are on the desks. It is a time capsule.

This mill was the recipient of raw silk from the far east, coming to the west coast in sailing ships, and rushed across country in special priority trains. At the lonaconing facility, the raw silk was transformed into thread. It then went to mills in eastern Pennsylvania by train.

The old factory has been visited by American Pickers and a Smithsonian Film Crew.
Every one wants to restore it, but it is structurally beyond that. It is privately owned, and not generally open.

There was a similar facility in Cumberland, some 15 miles away. The building survives, but is empty. 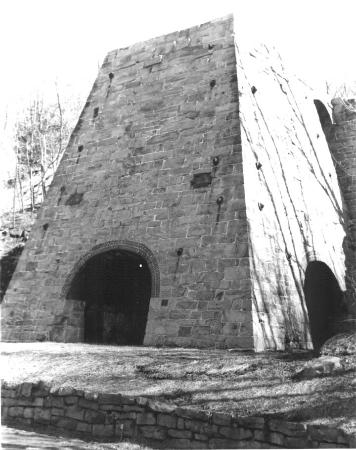 The Iron furnace, in the Lonaconing Town Park was built in the late1830's.
It was in the middle of plentiful iron ore and coal deposits. It was productive
enough that it out-produced the ability to ship the product where it was needed.
The furnace, and the town in general was modeled on the Welsh model, and iron workers from Wales were brought in to operate the facility.
Just a little further down Main Street is the library, styled something like the furnace - a good palce to research local history.