10 Things to Do in St. Andrews That You Shouldn't Miss

St Andrews (Latin: S. Andrea(s); Scots: Saunt Aundraes; Scottish Gaelic: Cill Rìmhinn) is a town on the east coast of Fife in Scotland, 10 miles (16 km) southeast of Dundee and 30 miles (50 km) northeast of Edinburgh. The town is home to the University of St Andrews, the third oldest university in the English-speaking world and the oldest in Scotland. According to some rankings, it is ranked as the third best university in the United Kingdom, behind Oxbridge. The University is an integral part of the burgh and during term time students make up approximately one third of the town's population. St Andrews has a population of 16,800 (in 2012).
Restaurants in St. Andrews 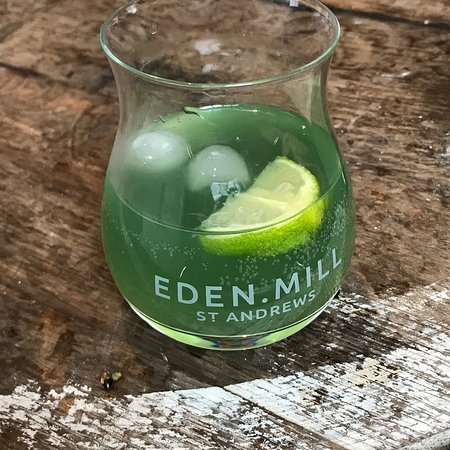 Just outside St Andrews, Eden Mill is Scotland's original single-site brewery & distillery. Since 2012 we've been brewing and distilling here, creating a unique and diverse range of beer, gin and whisky. Book one of our gin, beer or whisky tours and let us tell you our story, explain the history of our site, show you our production methods, and guide you through a tasting session to finish. We offer gin, beer or whisky tours 7 days a week and booking is essential. Our shop is open 10am to 5pm every day, where you are welcome to pop in and sample some of our products outwith tour times.

Chloe started our tour by giving everyone a Basil Smash gin cocktail. This tasted similar to a mojito and was a great start. Chloe then gave us an overview of Eden Mill and it's beers, whiskies and find. We then had a tour of the...MoreHello, Thank you for your lovely review. We are thrilled to read you had an enjoyable time with us at Eden Mill. We hope to welcome you back to Eden Mill again! Best wishes, Team Eden 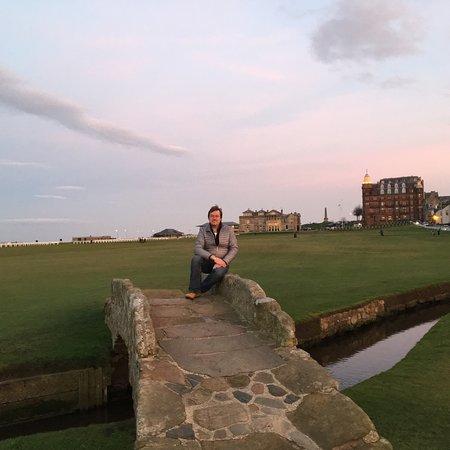 The famous Swilcan Bridge on the 18th hole of the Old Course at the Home of Golf. The bridge was originally built over 700 years ago so shepherds could move their flock across the Swilcan Burn which meanders through what is now the 1st and 18th fairways. Today the Swilcan Bridge, with the 'Auld Grey Toun' providing the most beautiful of backdrops, is one of the most iconic settings in golf. So much more than a little stone crossing, the Swilcan Bridge is the history of the game, it's the magic moments, it's felt the footsteps of the true greats.

What’s not to love about standing where so many brilliant golfers have stood before you? Be patient of others enjoying their special moment on the bridge and have your camera ready. 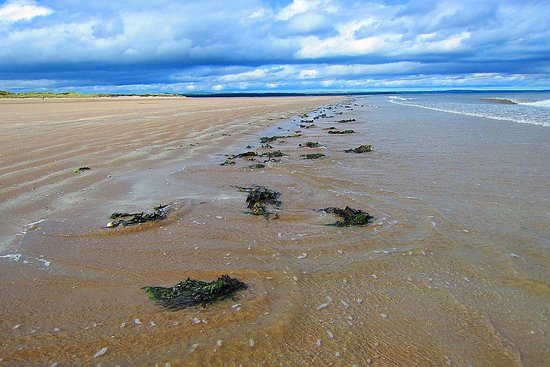 You can walk for miles along this wonderful stretch of sand adjoining the Old Course and lots of people good. It offers easy access to the town as well .Vey clean and appealing even on a cold winters day. The remains of St Andrews Cathedral, which was Scotland’s largest Cathedral and most magnificent church, show how impressive it used to be. The museum houses an outstanding collection of early and later medieval sculptures and other relics found on the site, including the magnificent St Andrews Sarcophagus of Pictish date. The precinct walls are particularly well preserved. St Rule's Tower, in the precinct, is part of the first church of the Augustinian canons at St Andrews built in the early 12th century. There are splendid views from the top. Joint ticket available with St Andrews Castle - Adult £9 Child £5.40 Concession £7

My wife and I visited St. Andrews and was lucky enough to have a local friend show us around town. Our second stop was St. Andrews Cathedral. It was an unexpected touching of my soul. I walk among the ruins where the Scot's walked, worshiped, lived, died, laughed and cried. It actually took my breath away to be in the place where the locals would have taken their hope and fears. Ask for guidance and strength and celebrated the most important events of their lives. It was beautiful and reverent. We took our time and strolled the grounds and reflected on what may have been. I will never forget this visit.

Craigtoun Park is a 47 acre park only 2 miles from St Andrews. The park itself is open 24/7 and it's a great day out for the whole family. During the season try the Rio Grande railway, Crazy Golf, Putting and Puffin,Billy - the road train that takes you round the whole Park. There are boats and pedaloes, a Bouncy castle and pedal cars for the little uns all open 10 - 5 weather permitting. The cafe is open every Saturday throughout the year and every day from April 1st to the end of October. It serves hot and cold food, teas and coffees and has a huge selection of ice creams. The paid for attractions open on 1st April this year and are then open every weekend and all Fife School holidays until the end of October 2017. More detail on our own website.

Very impressed with this lovely park when visited recently while on holiday with my 5 year old daughter. The atmosphere was great, plenty for kids to do. The bouncy Castles, ride on cars, trampolines, crazy golf, boating lake, mini train rides, fairy glen were all great. The weather was beautiful so we got to see the park at its best. The cafe was very good, nice service and extremely good value for what we ordered. This is a gem of a park,believe it's run by volunteers - what a great job you've done here. We'll be back next summer when next up visiting St Andrews. Founded in 1411, this university forms the centre of town.

Very historic place with wonderful buildings. Great just to walk around and see the architecture of the place. I wonder if the students realize how special this place is. 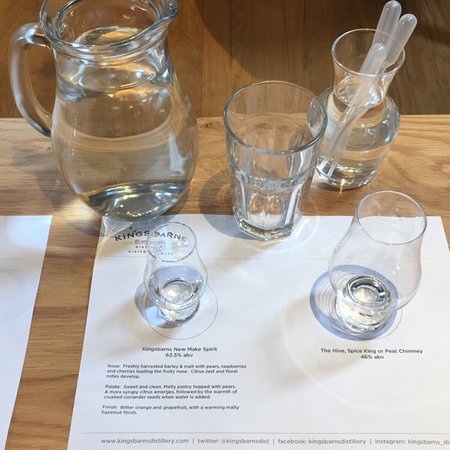 Kingsbarns Distillery and Visitor Centre in the beautiful East Neuk of Fife opened its doors in December 2014. The whisky distillery is situated between St. Andrews and Crail, close to the world famous Kingsbarns championship golf course. The historic and charming East Newhall Farm steadings were carefully restored and converted into a small distillery with exhibition, tasting rooms, shop and cafe. Tours run daily, providing an insight into the history of whisky at Kingsbarns Distillery, whisky production and an opportunity to taste. In addition to regular daily distillery tours, further whisky tasting options are available in the cafe, shop or in a private room; with exclusive evening drinks receptions and dinner options available. The cafe has a selection of locally sourced soups, scones, cakes, traybakes, sandwiches and toasties with a full range of coffees and loose leaf teas also available. We are open all year.

This was a Christmas gift which provided us with an interesting gin experience and a tasty Sandwich lunch. The distillery is a few miles south of Kingsbarns, set in old farm buildings that are beautifully restored. The gin tour lasts just over an hour and...MoreHi Bfmcm, Thank you for taking the time to review us, we're delighted to hear that you enjoyed your visit to the distillery and your lunch also. We hope to see you again soon! Kind regards Suzie Crerar Office Manager 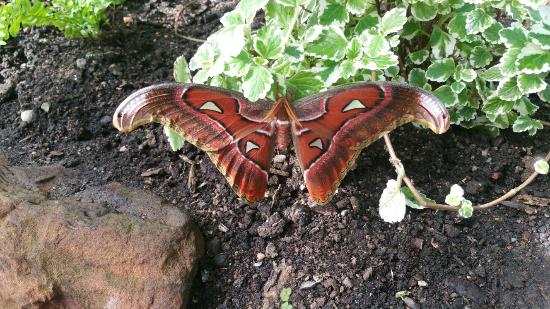 My wife and I visited here specifically to see the butterfly house but were utterly enchanted by the whole place. The Gardens are large and varied with loads to see. It is a lovely walk, especially through the woods where you can hear the nearby burn and see the pond - I spotted a couple of moorhens and a red squirrel in the vicinity. The actual butterfly house, though, has to be seen to be believed - there are literally dozens of them, in every colour imaginable, flying about, sucking in pollen off flowers, and resting on leaves while gently fluttering their wings. One even landed on my shoulder and stayed there for about fifteen minutes while I wandered about. It is very hot and humid in there - almost ninety degrees Fahrenheit - but it only takes about twenty minutes to experience all the delights so it’s well worth leaving your coat off for. The Gardens also have refreshments, a gift shop, and ample parking. There are also lots of quiet spots with park benches to enjoy all the nature in peace. All of the staff are very pleasant and helpful. We will most definitely be back in the spring to see it all again !

9. Museum of the University of St Andrews 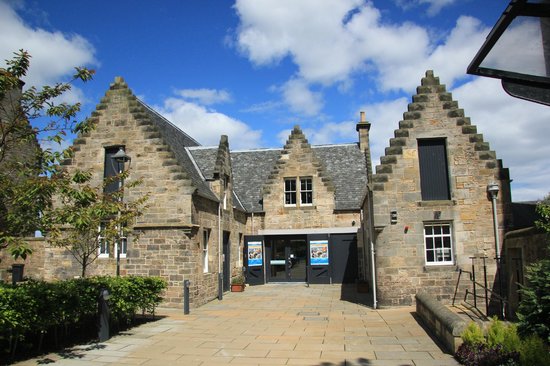 The Museum of the University of St Andrews (MUSA) is a free museum displaying some of the amazing treasures from the University's collection of over 112,000 artefacts. The Museum is located on the Scores in St Andrews and is home to St Salvator's Mace, which is still used in Graduation and Welcome ceremonies to this day. The museum has four galleries, a 'Learning Loft' and a viewing Terrace with stunning panoramic views over St Andrews Bay. MUSA is family friendly and its galleries feature a number of fun hands-on interactives as well as an art cart which is full of creative activities for children from dressing up to drawing. Free admission.

What a super place this is, Reading the history of the town, the Uni itself and the Reformation was very interesting, well illustrated and staffed by lovely people. St Andrews Castle is the ruins of the castle of the Archbishops of St Andrews, dating in part from the 13th century. On a headland to the north of St Andrews stand the ruins of the city's castle, the main residence of the bishops and archbishops of St Andrews and the focal point of the church in medieval Scotland. Explore the underground 16th-century siege mine and counter-mine, and the 'bottle dungeon', one of the most infamous castle prisons in medieval Britain, which was cut out of the solid rock. John Knox and George Wishart may have been imprisoned in this dank and airless space, and this is where its believed Cardinal Beaton’s body was kept when he was murdered in 1546. Join ticket with St. Andrews Cathedral available - Adult £9 Child £5.40 Concession £7

A great visit to this historic castle and what a helpful and enthusiastic member of staff on the reception.
Discount for over 60's, which we accessed for the first time and so pleased to be photo ID'd for the first time in years.
Great history presentation before going outside to the castle, location is amazing.
Please try to do the tunnel, all the way to the end!